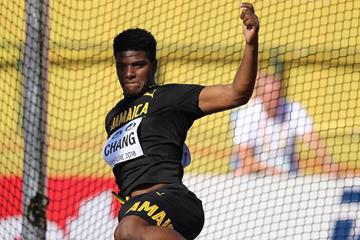 To say the men’s discus final at the IAAF World U20 Championships didn’t go to form would be something of an understatement.

Reigning champion and world U20 leader Mohamed Ibrahim Moaaz from Qatar scraped through to the final with his third throw in qualifying and could only finish fifth in the final with 59.87m after starting with two no-throws.

Second on the world U20 lists Kristjan Ceh from Slovenia missed out on a place in the final altogether and Cyprus’ Georgios Koniarakis, who was in contention to win his country’s first ever medal in World U20 Championships history, was seventh with 58.04m. Fifth-ranked Emanuel Sousa from Portugal also no-marked in the final.

The title instead went to Jamaica courtesy of their second string discus thrower Kai Chang who was beaten by teammate Roje Stona at both his domestic championships and the Carifta Games. He was the fourth best thrower in qualifying with 59.27m and extended his lifetime best in the second round of the final from 61.79m to 62.36m which remained unchallenged as the leading throw.

Jamaica is becoming an emerging force in the discus with Commonwealth champion Fedrick Dacres leading the world lists with 69.67m. Chang hopes his performance will help to bring the event into the limelight in his sprint-loving country.

“I hope my performance can help Jamaican discus throwing get a lot more recognition, as it's lacking there at the moment, so I hope I can motivate others to get involved,” he said.

Belarus’ Yauheni Bahutski threw 61.31m in the second round before consolidating his position in the fourth round with 61.75m while Chile’s reigning world U18 champion Claudio Romero set a season’s best of 60.81m with his first round throw to ensure bronze.

Romero has been nearly four metres down on his best form this season and wasn’t in the medal discussion prior to the event but the Chilean, who celebrated his 18th birthday on the first day of the championships, performed when it mattered.

“This was a very big accomplishment for me,” he said. “I had an injury this year that kept me from throwing for four months. I'm not happy with the throw but I'm happy with the position. Tampere has been such a great place, the crowd has been amazing. Next up is the South American Under-23 Championships.”

Romero picks up only Chile’s third medal in World U20 Championships history after Manuel Balmaceda’s silver medal in the 800m in 1986 and Natalia Duco’s gold medal in the shot put in 2008.