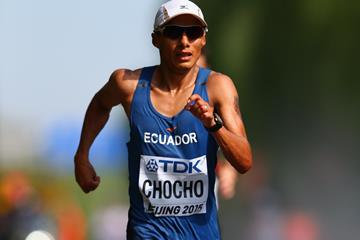 "I was exposed to race walking in my childhood. As a five or six-year-old boy, the second oldest of five siblings, I remember accompanying my father Luis to training sessions. A former race walker himself, he has been coach in our native Cuenca and instrumental in Ecuador’s success in the event, including three-time world and 1996 Olympic champion Jefferson Perez’s 1990 world U20 title and the 1995 Pan American Games gold.

"I took up race walking with my father’s group at the age of 11. I also did other sports at the same time, including triathlon, running and cycling. I did well in running. I remember running 10:45 for second place in the 3000m at the Boys and Girls National Championships at age 13.

"At age 15, I decided to focus on race walking only. I went to school in the morning and I did not have time to do more than one sport, so I decided to concentrate on race walking. I was good at it. I trained for the 5000m but at my first competition, the South American Race Walking Cup in Bolivia in 1999, the 10km was introduced and I finished third.

"As I grew older and continued to enjoy success, I joined my father as a coach in 2008. In 2010, I met my wife (South American 20km race walk record-holder) Erica de Sena and she joined me in Ecuador a year later. We trained together with my father’s group. In 2014, I was the only one in the group who didn’t improve their time – I walked 1:29:58 for 20km – so I decided to coach Erica and me.

"For the most part, we travel to the same competitions and we find a lot of support and comfort in each other. Her Spanish and my Portuguese have certainly improved. My father, my mother Marta Leon and Erica are the biggest forces behind my success.

"Training alone has its pros and cons. Cuenca is 2500m high and the course I trained on is not flat either, so it gives me a lot of mental strength to walk alone and stay focused on my rhythm and technique. The longest I have walked alone in training has been 45km, but I certainly enjoy walking the longer distances with others.

"I am proud of my best years in 2015 and 2016, when I won the Pan American Games gold in 50km and finished eighth at the World Championships in Beijing with a South American record. I improved again to 3:42:57 in my first competition of 2016. I had great hopes for the Olympic Games in Rio de Janeiro but I had a muscle tear in my right leg before my last training camp in France. That, combined with my grandmother’s death just before my departure, took its toll. I was fit physically but I lost key training time on my technique. I was disqualified at 10km in both the 20km and 50km.  That was the lowest point of my career.

"Since finishing fourth at the IAAF World Race Waking Challenge in 2015, I had always wanted to win it. I accumulated enough points early on this season with wins in Mexico and at home, so I managed to win this year by one point. Erica took the trophy in 2017 so this year it was my turn. It was also great boost ahead of 2019 with two main goals: the Pan American Games and the World Championships. Competing in the evening in Doha will certainly be a new challenge to all of us."