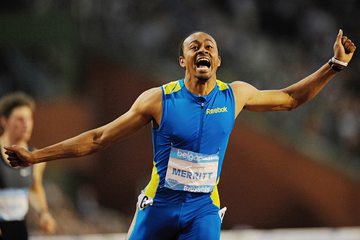 That moment when… Merritt broke the world record

US sprint hurdler Aries Merritt capped a perfect 2012 season by smashing the world 110m hurdles record in Brussels to add to his Olympic title he won in London. Here Merritt reflects on that magic moment in the Belgian capital.

“I had chased the world record all that season but in my penultimate race of the season – a 12.97 clocking with a 1.2m/s tailwind – I thought my last realistic chance of breaking the mark of 12.87 (held by Dayron Robles) had gone. I didn’t anticipate anything in Brussels. It was my last race of the year and all I was concerned about was going home after two-and-a-half months in Europe.

“That day I wasn’t going for a particular time, I was just focused on the win. My start wasn’t particularly great and at about halfway I thought Jason (Richardson) should be coming about now because that’s how it was through much of the season, but that day he wasn’t there. I thought, ‘okay, he must be having a bad race, I’ll just keep this going’. I did, however, notice the hurdles coming up on me really quickly and that’s when my technique really started to deteriorate over hurdles nine and 10.

“I crossed the line and thought, ‘this must be quick’, but every time I had thought that during the season, I had recorded about 12.93. As I crossed the line, I saw the time and started screaming and yelling. I asked my agent, ‘is this for real?’ and he replied, ‘Yes, it’s for real’. I was in complete disbelief.

“Because it had been to a place it had never experienced before, my body started to shut down after the race. Before I went to the post-race press conference, my calves and hamstrings were starting to tighten and cramp. I remember Usain Bolt was at the press conference and he graciously said, ‘I am not going to take this moment away from you’.

“The funny thing was Brussels was the one race that season where I didn’t try to break the world record. It just happened on its own.”