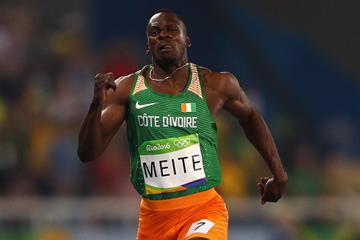 That moment when... Meite broke his toe at the 2012 Olympics

African 100m champion Ben Youssef Meite is among a crop of the world’s leading sprinters. Here the 30-year-old Ivory Coast international talks about the significance of overcoming serious injury and two years in the wilderness on his journey to reaching the Olympic 100m final and fulfilling his long-time ambition to join the sub-10-second club.

“At the 2012 Olympic Games in London I was in the best shape of my life (up to that point) and in my heat, I ran a national record 10.06 to place second. But then in the semi-final I broke my big left toe. I carried on to the finish because you should always finish a race, but I was eliminated in fifth in a time of 10.13. I was initially told by doctors I would need surgery but I was warned that I might not make a full recovery, so I decided against it. But when I returned to training, the toe continued to hurt.

“I was living in Canada and I decided to take one year out from the sport in 2013 to help the injury heal. Then in April 2014, two months after my father, Amadou, (a two-time Olympian and 1978 All Africa Games 100m champion) died, I decided to go back to training once more in an effort to fulfil my dream of becoming a sub-ten-second 100m sprinter.

“It was hard being away from athletics for so long because I love sport. Then in my first planned competition for two years ahead of the 2014 African Championships I contracted malaria, which was really hard for me because it meant for two years I couldn’t run.

“In June of last year in Prague I ran 9.99 and then I ran national records of 9.97 and 9.96 in the semi-final and final, respectively, at the Rio Olympics where I finished sixth. I was running against 22 and 24-year-olds who were probably wondering who this guy was at the age of 30?

“I look back on breaking my toe as a big test which I overcame and something which has helped define me as an athlete.”