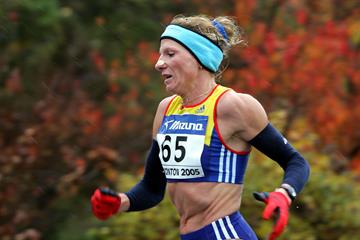 For distance running legend Dita, there’s nothing quite like that rainy day feeling

Branded the ‘Ironwoman’ of Romanian athletics, Constantina Dita enjoyed a lengthy and successful career as one of the world’s foremost female endurance runners of the Noughties.

With a reputation for thriving on hard work and regularly logging more than 200km a week in training, Dita also excelled in cold, wet and windy conditions.

So when she awoke on the morning of the 2005 World Athletics Half Marathon Championships in Edmonton, Canada, to light rain and chilly temperatures, the US-based distance runner was unperturbed about what she faced.

“The rain worked in my favour, I always run well in the rain,” explains Dita, who for the past 19 years has been based in Boulder, Colorado.

“Often in Boulder we have cold weather and strong winds and sometimes I’d run 30km in a strong wind. But I never gave up. I never train inside at the gym.”

First of eight world half appearances in 1998

Few athletes embraced the World Half Marathon Championships more than the Romanian who made the first of her eight appearances at the event in 1998.

That was in Uster, Switzerland, where she placed 29th and secured team silver for Romania. At the 1999 edition in Palermo she placed 13th before finishing 32nd in Bristol 2001 and 22nd the following year in Brussels.

Dita advanced significantly in 2003, setting back-to-back marathon personal bests in London (2:23:43) in Chicago (2:23:35), placing second in the ‘Windy City’. Her improved form was reflected in her performance at the World Half Marathon Championships in Vilamoura, Portugal, when finishing fifth in 1:10:05.

Besides placing a disappointing 20th when struggling in the intense heat at the Athens Olympic Games her 2004 season was also a success. She claimed a podium spot for third in that April’s London Marathon and bounced back from her Olympic pain to win a bronze medal at the World Half Marathon Championships in New Delhi.

“In New Delhi the temperature was nowhere near as hot as it had been in Athens,” she recalls. “It was a very flat course and I just kept patient in the race. It was nice to finally win an individual medal (at the World Half Marathon Championships).”

Remarkably, just one week after this victory the tough-as-teak Romanian, who was born and raised on a farm in the country’s south, flew halfway around the world to clinch victory in the Chicago Marathon in 2:23:45.

Some may question the logic of decision to run two big races in such close proximity but for resilient Dita it was not big deal.

“Many times close to a big marathon, I did a tempo run around 1:10 long,” she explains. “All I was doing was replacing a half marathon race of similar distance to the tempo run.”

World marathon bronze and half marathon gold in 2005

In 2005 the hard-grafting Dita was in the form of her life. In April’s London Marathon she set a national record of 2:22:50 for second behind Paula Radcliffe and in August snared a marathon bronze at the Helsinki World Championship.

Targeting the defence of her Chicago Marathon in the fall - once again the World Half Marathon Championships – which took place just one week before would provide the perfect preparation.

However, her task in Edmonton would not be easy. She faced formidable opposition in the shape of Lornah Kiplagat of the Netherlands and Kenya’s Susan Chepkemei, a three-time World Half Marathon silver medallist.

Yet Dita she had one big advantage on her side: the wet and cold weather. She seized the opportunity.

A natural front runner, Dita, who had the extra motivation of her ten-year-old son, Rafael, cheering from the side of the course, took the pace at 3km. By 8km she had broken free of the pack and by 10km had already opened up an 18-second lead on the pursuers. By 15km her advantage had widened to a substantial 41 seconds.

“I was surprised (at the lead I held), I was running a normal pace but maybe the opposition found it very cold,” she says. “For me, it was good weather. I love to run in the rain.”

Aware of her sizeable lead she tried to remain focused in the final kilometres to cross the line in 1:09:17, just over a one minute clear of Kiplagat, the silver medallist.

“It was such a happy feeling to win my first gold medal at a major championship,” she explains. “For me, it was amazing and it was close (in terms of achievement) to what it would have been winning a gold medal at the track and field World Championships.”

Dita also enjoyed the additional bonus of helping inspire her country to team gold – which she describes as an “amazing” feeling.

.. and Olympic marathon gold in Beijing - at 38

Just eight days later her rich streak of form continued as she lowered her Romanian marathon record to 2:21:30 when finishing second in in Chicago.

Edmonton was not quite the end of her World Half Marathon Championships journey. The following year she won silver in the rebranded World Road Running Championships held over 20km in Debrecen.

However, Dita’s finest hour arrived when winning Olympic marathon gold in Beijing at the age of 38 in the wet conditions she so enjoyed.

Today Dita divides her time between her native Romania and Boulder, and is still involved in the sport as founder and president of the annual Bucharest International 10km.

She is also still running and last year she completed the Berlin (3:07) and New York City (3:30) marathons. This year she hopes to continue with her quest to complete the full set of six Marathon Majors by running the Boston Marathon. She was planning to contest Tokyo, but the mass race was cancelled due to the outbreak of the coronavirus in Japan.

Yet despite her considerable marathon accomplishments, the 49-year-old former Olympic champion still holds the World Half Marathon Championships with great affection.

“To win my gold medal was a great achievement and it gave me much encouragement to run better in other races,” she explains.