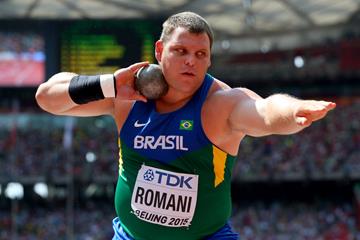 Darlan Romani: I love throwing because...

Brazilian shot putter Darlan Romani has enjoyed an outstanding 2018 setting a South American record of 21.95m and claiming a string of top three finishes in the IAAF Diamond League. The 27-year-old, who finished fourth at the World Indoor Championships Birmingham 2018, articulates his thoughts on his passion for his discipline.

“I started to both train and compete for shot, at the age of 13, under the encouragement of my brother, Back then, I competed for fun and without pressure and few would have predicted I would go on to enjoy a professional athletics career because I was too small. Yet I always had that belief that one day I too could reach the world level. I initially struggled technically with the event but I worked hard. I watched the best guys compete and I saw that to fulfil my potential I had to take the sport more seriously to be a champion.

“In my younger days, I was not inspired by any one particular shot putter, I liked to see them all compete. What motivated me was simply to be the best I could be and telling myself that one day I wanted to be like them.

“I compete in shot because today when I enter a competition I have the belief in my ability to overcome my opposition, although this is always with total respect for my competitors. For every competition, I remind myself that I have arrived in a place I had always dreamed – of competing alongside the best in the world. This thought fills me with the belief that every painful training session and every defeat throughout my athletics journey was worth it.

“I am also motivated by the knowledge that just as I was once inspired by the top athletes, I too can fulfil this role to the younger generation of athletes. That I can be an example – as an athlete, person and professional - for those just starting in their sporting career.

“Without the shot, it is difficult to answer where I would be today. I have been in the sport 14 years and I am very fortunate that I love throwing. I’m at my happiest in a competition, knowing that I have given my best. I love that feeling of unleashing the shot knowing I have made a near perfect put – even before the shot has touched the ground.”