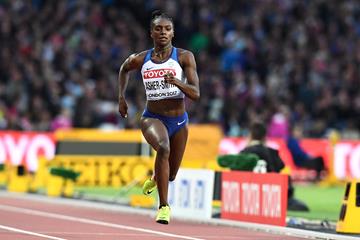 Dina Asher-Smith: I love sprinting because...

World 4x100m silver medallist Dina Asher-Smith is among the finest sprinters in the world. Here the 22–year-old British athlete explains just why she does it.

“My journey into sprinting was a little strange in that I started out as a cross country runner. I was the sort of kid that gave everything a go; swimming, diving, ballet and I even played the trumpet. I was aged eight when a friend said she would buy me an ice cream if I would come along with her to a new running club at my primary school. I decided to take up the offer, but didn’t realise by turning up on day one, I’d be entered into a local cross country competition. I thought, what have I got myself into? I turned up on a cold November day at Crystal Palace in my bright orange hat thinking; ‘this is certainly not worth an ice cream’! I ran with about 300-400 kids and I’m sure at one stage I tasted blood in my mouth – I’d never done an endurance sport before. It was only some time later I realised I’d finished fifth out of the entire field. From then I had to do a whole season of cross country before later finding sprinting, which I enjoyed far more.

“For many years, I did not take sprinting too seriously. To be honest I didn’t think I was anything special but after I was nominated for BBC Young Sports Personality of the Year in 2013 (a year which Asher-Smith was crowned European Junior 200m champion and World 4x100m bronze medallist) everything changed. Up until that point, I was a typical schoolgirl who happened to do running on the side. But here I was up for an award against career sportswomen and that was the point I thought, okay, I’d better devote a more professional approach to athletics.

“I’ve always been competitive. I come from a very competitive family. My mum played hockey and when we used to play in my back garden she would never just let me go past her like most mums would. She used to say to be able to pass me you have to beat me – you have to be good enough. That’s just how my family was.

“I run because I love to compete. I love racing, especially the adrenaline rush and high I feel after I finish.

“I also love running because I like to perform in front of a crowd – it makes me happy. When I was younger I used to do street jazz dancing. My mum and dad used to watch and I just loved being on stage and putting on a show – even if I wasn’t always in time! In a similar way, I love to sprint and give my best in front of a big crowd and make people proud.

“Some people ask me what is feels like to sprint fast and to achieve this you need that perfect balance between being both aggressive and completely relaxed. It is like a beautiful paradox of producing something so graceful with so much power and force. I feel both fortunate and grateful that I wake up every day and do something that I adore.”