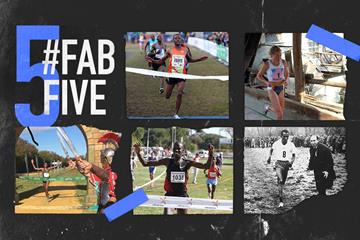 Ahead of the 2019-20 IAAF Cross Country Permit season which opens next weekend with the Cross de Atapuerca in Burgos, we focus on five outstanding and historic races within the calendar.

First held in 1957, the Campaccio – held in San Giorgio su Legnano just outside Milan – has been a mainstay on the international cross country calendar for more than six decades. The list of past winners reads like a who’s who of distance running legends with Paul Tergat, Haile Gebrselassie, Kenenisa Bekele, Eliud Kipchoge, Ingrid Kristiansen, Grete Waitz and Hellen Obiri all on there.

Originally raced on farmland, the small host town has a population of just over 6000 people.

Arguably, the world’s most iconic annual cross country meeting was first run in 1933 and organised as a direct response to a neighbouring village running a race around seven clock towers.

Translated into English as ‘Five Mills’, the race is based around water mills in the town, creating some unique images from the event.

Former winners of the men’s race include Kip Keino, Filbert Bayi, John Ngugi and Kenenisa Bekele. Faith Kipyegon, Benita Willis and Lynn Jennings are among those to have tasted success in the women’s race.

Set in the ruins of the ancient Roman city of Italica, the annual race is one the most prestigious events on the cross country calendar.

First contested in 1982, the race which is run on red clay surface in Santiponce near Seville loops through the ancient streets of Italica, passing through ruins throughout.

Star athletes to have claimed top spot in the event include Geoffrey Kamworor, Joshua Cheptegei, Paula Radcliffe and Beatrice Chepkoech.

Set in Portugal’s stunning Algarve and known locally as the ‘Cross Internacional das Amendoeiras em Flor’, this race was first contested in 1977 to support sport and tourism in the region and is now one of the classic European cross country meets.

Named after the white blossom which appears on the almond trees in the region, the race was moved to Vilamoura for a spell before returning to his original home in 2005.

The race has attracted a host of world-class international performers but the host nation has also enjoyed significant success with Manuel Damiao (2013) and Carla Salome Rocha (2016 and 2018) the most recent Portuguese victors.

First contested back in 1943, the race in Elgiobar in the Basque region is one of the iconic cross country races in the world.

The race is named after Juan Muguerza, the Spanish 1500m runner who competed at the 1920 Olympics and was later killed during the Spanish Civil War.