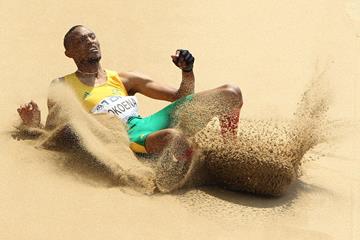 He plans to compete in both the long jump and triple jump in 2014. In the case of the latter event, he was the 2004 world junior champion but has not competed in the triple jump outdoors since 2007.

Godfrey Mokoena: One, I get to travel. Secondly, I get to meet different athletes around the world and thirdly I get to eat great food at the hotels. I love that.

GM: Travelling from one airport to another to go to meetings, and getting up early the day after a meeting to a catch a flight to the next meeting. I hate that.

GM: I like it when we do the jump and bounding sessions. These are a lot easier than running 200m or 300m.

Who is your all-time favourite training partner?

GM: He’s a South African triple jumper called Tumelo Thagane (with a personal best of 17.09m). We’ve been friends since school and we trained together for five years before we went our separate ways.

GM: I like to relax in the garden by the roses and flowers. I like the flowers, the trees and the birds’ singing. It helps me relax.

GM: I actually run a restaurant and on a non-training day I’d be there, listening to a live band and chilling.

What is your favourite stress-reliever?

GM: Driving, I love to get in the car. It helps me relax.

If you could choose one track and field athlete that you could relax with for a day, who would it be?

GM: Allyson Felix, because she always seems such a calm lady.

Where does your passion for music come from?

GM: When I was back at high school. I loved how people could express themselves through music.

Do you play any instruments?

GM: I play the piano. I never took any special classes but I was taught by a friend. I still like to play a bit. Whenever I’m next to a piano, I like to play.

What is your favourite musical experience?

GM: The best experience came watching a South African pop-rock band at the theatre called The Morning After. I love their music and the kind of songs they play.

Which track and field athlete has the best singing voice?

GM: I think Donald Thomas (the 2007 world high jump champion from The Bahamas). I’ve shared a room with him a few times and he likes singing. He is a really nice guy, but he sings too much!

Who is your all-time favourite music artist?

GM: Michael Jackson. He made the music industry become one. I like him because he was so different and unique in the world of music.