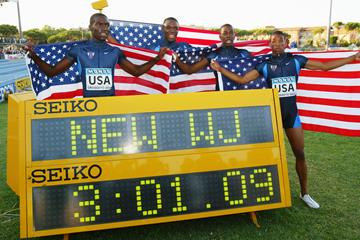 Kerron Clement’s story behind the picture

Olympic 400m hurdles champion Kerron Clement casts his mind back 14 years to this image of him and the world U20 record-breaking US 4x400m quartet at the 2004 World Junior Championships in Grosseto, Italy.

“Back in 2004 I was a rebel who just ran because I loved to run track. Back then I never thought about breaking records – it just happened.

“Leading into the World Junior Championships, which was my first international event, I had enjoyed a fantastic year and my expectation was to win the 400m hurdles. It was a tough field. I was up against the defending champion LJ Van Zyl as well as my countryman and fellow 4x400m member Brandon Johnson. I set my goals, executed my race plan and came away with the gold medal in a championship record (of 48.51).

“Leading into the men’s 4x400m, I felt relaxed. We had a strong (4x400m) squad, which also included the 400m flat champion in Grosseto, LaShawn Merritt. The talk before the race was that we could go for the world junior record of 3:01.90, and our feeling was ‘let’s do this’.

“During the race, we put all our personal rivalries aside. We were representing the US, we had to be friends and I think the time we managed to achieve reflected that.

“I ran anchor (after the legs of Johnson, Merritt and Jason Craig) and I had to remember to think of the race as a time trial and that I was running against the clock. I recall looking at the clock in those last 100 metres, and digging as deep as possible.

“It was a great achievement to set the world U20 record of 3:01.09. It was special to accomplish a world record as part of a team and for it to still stand today as the championship record is amazing.

“I also recall Michelle Carter was part of that US team. We had known each other since high school as we are both from Texas, but I really got to know her well that trip and we became best friends. We are very different personalities – but I guess opposites attract! We both share a passion for music and even today we enjoy each other’s company at major championships. She is my road dog. For her to win gold (in the shot put) in Grosseto as well was special.

“Looking back on my experience it was great to be given the chance to run on the international stage for the first time. I really appreciated what I achieved in Grosseto, and it set me up for years to come.”