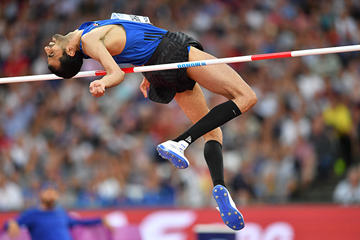 Syrian high jumper Majd Eddin Ghazal has enjoyed an outstanding 2017 season which included a World Championships bronze medal and gold at the Asian Indoor Games. The 30-year-old says that battling severe anaemia at the 2016 Rio Olympics was one of his most difficult experiences.

“During the 2016 season my preparation for the Rio Olympics in all respects went very well. I had jumped a national record of 2.36m in Beijing and performed well at the Monaco Diamond League, finishing third, and I was hopeful of a good performance in Rio. I was lean and ready to perform.

“Yet when I got to Rio, it was a disaster in every sense of the word. I struggled to stand. I was battling with vertigo. I had constant headaches, an accelerated heartbeat and a sense of fatigue and exhaustion.

“Unfortunately, because my usual medical staff did not accompany me in Rio, I did not have the right level of medical support on hand to treat the problem.

“Despite my condition, I arrived with the ambition to win a medal and I was determined not to withdraw under any circumstances.

“In qualification, I managed to clear 2.29m with my second attempt and I made it through to the final. I was confident I could then jump 2.35m and fight for a medal but it wasn’t to be.

“I struggled to run or even stand up. I struggled to put on my spikes and I could not warm up ahead of the final. It’s hard to describe just how bad I felt.

“Understandably, I was not in the best physical condition to be in the mix and I ended up finishing seventh with a best clearance of 2.29m as Derek Drouin took the gold.

“After the final, I went to hospital when it was discovered I had severe anaemia with a haemoglobin level of 5.6. I had never had anaemia before and it was really hard to fathom. The doctors told me that even by competing I should have been awarded a gold medal, but I was far from happy.

“After the Olympics, it took three full weeks for my haemoglobin levels to fully recover. Thankfully, I have not had a recurrence, although I carefully observe myself to avoid it happening again.”