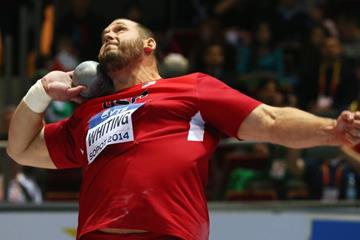 Last weekend the US shot putter successfully defending his crown at the 2014 IAAF World Indoor Championships in Sopot.

Ryan Whiting: I’m a very competitive person, so I’d say the first one is getting the chance to compete all the time. Another one of my favourite things has been the freedom of my schedule as a track and field athlete. This has allowed me more time to spend with my son, Charlie. The third one would be being around like-minded people, who understand competition and setting goals.

RW: I don’t like travelling so much. I’m back and forth across the ocean probably 12 times every year. That kind of travel wears on me after a while.

RW: I always like Monday practises. I feel like my body has recovered from the weekend and I feel pretty good right throughout the workouts. I often do 20-30 full throws and as the throwing element to training is what I most look forward to, I would say this.

RW: As much as I like Mondays, I don’t like Wednesdays. I often have a sore body for that point of the week and my throwing sessions never go so well. If I’m having a bad throwing day, I know it will often be on a Wednesday.

What is your all-time favourite training venue?

RW: I’ve set a lot of my personal bests at Arizona State, so I’ll say there.

RW: I’d have to say on my couch sat in front of the TV with my dog, a South African mastiff.

RW: It is often on a Sunday. I love watching American football. I follow the Philadelphia Eagles and it would often be sat on the couch, having a few beers, watching the football. I’m part of a fantasy football league and that adds an extra element of interest.

If you could pick one track and field athlete to relax with for a day, who would it be and why?

RW: Probably Reese Hoffa (the 2007 world shot put champion from the USA). We get along pretty well. We have fun together and we spend a lot of time together on the circuit. On the women’s side, it would probably be Janay DeLoach Soukup (2012 Olympic long jump bronze medallist). I always get along with her – she always seems a lot of fun.

RW: I love the movie Blow with Johnny Depp.

How did your passion for astronomy start?

RW: I really love books and one of my favourite genres is sci-fi. I love Arthur C Clarke books and as his books touch on astronomy I decided to find out more about the night sky, bought some binoculars and it just went from there.

What is the most amazing thing you’ve seen in the night sky?

RW: I like the planets. I really like seeing the moons across Jupiter and the transit of Venus across the sun. That won’t happen again for a long time, so that was a cool thing to see.

How much time do you devote to astronomy?

Are there any transferable skills between shot put and astronomy?

RW: Not really. It just helps me take my mind off training. It gives me a nice balance.

Do you have a favourite country from which to view the stars?

RW: I was in Poland a couple of winters ago for the Pedro’s Cup in Bydgoszcz. I took my telescope along and we had a clear night. The sky was amazing that night.