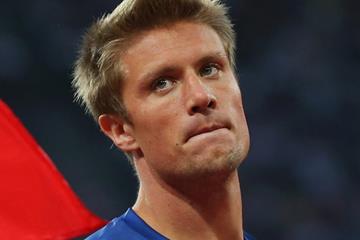 Two-time Olympic javelin champion Andreas Thorkildsen is next up to answer our work, rest and play questions.

Andreas Thorkildsen: Seeing new places, the fact I don’t live my life at a desk and being able to train and compete to a high level.

Do you have a favourite training session?

AT: The one that I both love and hate is throwing. It is something I can really look forward or be apprehensive about. If I go into a session a little banged up, my technique is a little off and I’m not 100 percent, I can be apprehensive. If it works and goes well, it is great. I have a love-hate relationship with throwing sessions.

AT: The one I never look forward to is cardio. That is usually running on a treadmill. The distances vary in intensity and length. I’m always happy to be done with them.

What type of music do you listen to when you train?

AT: I listen to music for every type of session, except when I’m throwing. The type of music I listen to changes depending on the session. If I’m going hard out in the gym, I listen to loud and obnoxious music. It will be either rap music or really hard rock; the kind of music that would just sound like noise to those who hadn’t heard it before.

Who is your all-time favourite training partner?

AT: I used to really like training with Mike Hazle (the US thrower and 2007 Pan American Games silver medallist). He would help push me at some areas and I would help push him in others. Stuart Farquhar (New Zealand javelin thrower) is good to travel with as we have a mutual love of the Xbox. In my younger days Steve Backley (four-time European champion) was really good to train with.

Do you have a favourite place to relax?

AT: At home. Either in bed or on the couch, watching TV or playing Xbox

AT: I don’t really like days off, unless I’m really tired. I like to go to training. If I do have an off-day, I like to be so tired from training that I don’t have the effort to do a lot. A relaxing day for me would be walking my dog in the park.

If you could pick one athlete to spend one day to relax with, who would it be?

AT: Breaux Greer (the US Javelin thrower and 2007 world bronze medallist) is so much fun to hang around with. He would keep me entertained for a day. He’s naturally really funny. If I spent the day with him, I would laugh all day.

What is your favourite TV programme?

AT: Family Guy. I set my cable box to record it every day. The style of humour really connects.

What is your favourite drink?

AT: An ice-cold beer.

When did the passion start for Xbox?

AT: I grew up playing games from a young age. I like to play Call of Duty, but the game I used to play for hours was Gears of War. I played with a really good group of guys online. I knew the game would be good if six hours straight of playing would feel like half an hour.

Have you ever played javelin on the Xbox?

AT: The problem is the javelin is rubbish. I played a game before an Olympics and I think in my second attempt I threw 105m. I think 105m is a pretty ridiculous distance when the (actual) world record is 98.48m (set by Jan Zelezny). The maximum you should be able to throw (on the Xbox) is 100m. I think sports games are better on the Wii, but for me that defeats the object because when I want to play I want to be resting and not moving around.

Do you ever play Xbox with other javelin throwers?

AT: I have played with Stuart Farquhar, although the time difference (between Europe and New Zealand) is pretty crazy. This would mean one of us would have to get up pretty early in the morning to play and it is not going to be me!

Does the fact you are a top athlete help your Xbox skills?

AT: Maybe, because the hand-eye co-ordination needed (to play well on the Xbox) and quick reactions could help. Logically, I think it would help a little bit.

How does Xbox help your athletics?

AT: As we are athletes who train hard, we need to recover and I know this might sound lazy but laying on the couch and expending as little energy as possible playing video games can be a good thing.