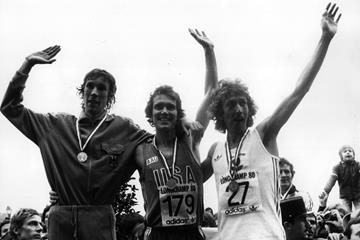 Craig Virgin remains the only US athlete to win the men’s senior race at the IAAF World Cross Country Championships. In the second part of our series where we’ve invited top athletes to recall their memories of competing at the World Cross, the 1980 and 1981 gold medallist reflects on his experiences in the event and explains why he would encourage any distance runner worth their salt to fully embrace the biennial competition.

Early on, cross country proves to be the perfect match

Perhaps it was Craig Virgin’s rural background, but from the moment he first tried cross country as a high school freshman, he appeared perfectly suited to the challenge.

“I learned to love cross country because it was just like being on our family farm and running across the grassy pasture herding cattle,” says Virgin, who triumphed on his cross-country debut as a 14-year-old.

A big success on the ultra-competitive Illinois high school cross country scene, he later proved a collegiate distance running star, memorably claiming victory at the 1975 NCAA Cross County Championships. The following year the 20-year-old showed his track prowess by qualifying and competing in the 10,000m at the 1976 Olympic Games in Montreal.

Exposed to “rain, snow, sleet and hail” all in the same race, Virgin finished sixth on his debut and was hooked.

“Racing in the World Cross Country Championships left a big impression on me,” he recalls. “I was intrigued by the reverence the race was given by the European media and sports fans. It was as big as the Kentucky Derby or Indy 500 back in America.”

He returned the next year for the event in Limerick, Ireland, but in torrential rain he slipped and fell in the mud early in the race. He recovered to finish 13th but was left frustrated by the experience because he felt he was in shape that year to claim a podium spot – a fact born out later that year when he smashed Steve Prefontaine’s US 10,000m record.

For the 1980 edition staged at Longchamp racecourse in Paris, Virgin was determined to make amends for his disappointment in Ireland. Having matured both physically and mentally, he was optimistic of a great showing, but it was the fair-haired Englishman Nick Rose who set a ferocious pace at the front.

On the fourth of five laps over the 12.5km course, Virgin had finally caught the lead pack and then set off in pursuit of Rose. He reduced Rose’s 120-metre lead down to 20, only for the long-time leader to respond to the Virgin’s looming threat with a powerful surge at the bell.

The first significant move was made by Orthmann, the first to catch and pass the fading long-time leader with some 400 metres remaining. But Virgin wisely waited before unleashing his gold medal charge. He had practiced on the finishing straight many times during the week prior to the race and felt it to be deceptive.

“To win a big international race, you need at least two to three gear changes and my first came with 800 metres to go when I followed Orthmann, but did not quite match his ambitious pace. My second gear change then caught and passed Rose to move into second place with 200 metres remaining. Then, with about 100 metres to go, I found one last ‘Hail Mary’ gear and kicked again in pursuit of Orthmann.”

Then, as the giant German looked to his left in an effort to recognise the danger, Virgin cleverly nipped in on Orthmann’s blind side to sweep past the leader and sprint to victory by one second. It was a pulsating finale with the lead changing three times in the final 400 metres.

Devastated to miss out on the 1980 Moscow Olympics because of the US-led boycott, Virgin was determined to return the following year to defend his world cross crown in Madrid.

Facing a new threat from a crack Ethiopian team – led by Olympic 5000m and 10,000m champion Miruts Yifter – Virgin acknowledged the strength of the challenge.

However, he felt ready for all comers. “I had advanced since my victory in Paris,” he says. “I felt near my Mt. Everest. My mental and physical strength was nearing an epoch.”

From the outset, the Ethiopians were prominent and with two laps remaining the men in green and red “took off” with Virgin dropping off the pace halfway around the penultimate lap. Facing what he felt was certain defeat in defence of his title, he was given an unexpected and welcome reprieve as the leaders approached the start of the last lap.

“I saw the Ethiopians going off the side and heading for the finish line, even though there was still a lap to go,” he recalls. “The officials started pulling ropes up and redirecting them on the course and, although I’m gassed, I’m starting to laugh because they were devastated and running about like confused chickens surprised by a fox.”

Virgin took control of the race, although one Ethiopian, Olympic 10,000m bronze medallist Mohammed Kedir, sprinted and caught the American 600 metres into the final loop. Kedir launched his finishing drive, but having expended far too much energy in his earlier pursuit of Virgin, the defending champion picked off the Ethiopian with a late burst to claim a two-second win.

“I won more easily in Madrid than I did in Paris,” he said of this triumph, “and for me it proved my 1980 victory wasn’t a fluke and that I could have done a fair battle with the Ethiopians had I been allowed to compete at the Moscow Olympics.”

Cross country solid base for track and the roads

Virgin believes without question that his training background for the World Cross Country Championships gave him the endurance to excel during the ensuing summer track season.

He also believes the event can serve as excellent preparation for a serious marathon bid in April or May and he would like to see more marathoners enter the fray. Virgin himself proved this by running a 2:10 marathon in Boston to place second to Japan’s Toshihiko Seko about one month after his World Cross triumph in Madrid.

“To finish in the top five at the World Cross today requires a combination of strength and speed,” he adds. “The marathon has gotten faster and the speed training for effective cross racing on grass translates well now to top marathon race pace on the road.”

Unfortunately, a kidney infection denied Virgin the chance to go for a hat-trick of World Cross victories at the 1982 edition in Rome. He went on to compete at a further five World Cross Country Championships, but never again came close to climbing the podium as an individual.

Yet beyond the individual benefits of competing at a World Cross, Virgin – who qualified for 12 US World Cross Country squads and competed nine times at the historic event – insists the team and developmental aspects of the event should not be underplayed.

"We trained together, we ate together, and even partied together, and it was always so sad when we had to leave to return home,” says Virgin, who featured on five silver-medal-winning teams. “We all came together as athletes with a mutual respect for one another and a shared team goal that bonded us together forever.”

Yet there is another overlooked benefit of the World Cross, according to Virgin, and that is the priceless knowledge and experience accrued by junior athletes when around their senior peers.

“For the junior athletes, personal exposure behind the scenes to the bigger name senior athletes acts as a catalyst for them to become more dedicated to their sport, set higher goals, and launch their career to another level.”