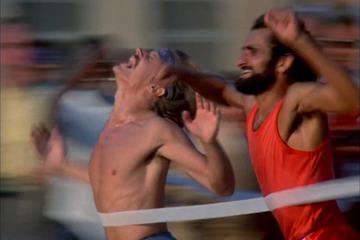 If you've not seen - or at least heard of - these 10 movies, are you even a real athletics fan?!

The Loneliness of the Long Distance Runner

The Bafta Award-winning British New Wave coming-of-age movie may be almost 60 years old, but it remains a timeless classic.

Focused on the story of rebellious youth Colin Smith (Tom Courtenay), who is sentenced to a borstal for his role in a bakery robbery, he turns to long-distance running as a means to escape the bleakness of confinement.

The gripping movie reaches an exciting crescendo when he is promised an early release if he runs for the reformatory institution in a race against a public school.

A US suspense thriller starring Dustin Hoffmann as grad student and running obsessive Thomas 'Babe' Levy, who is pursued by Nazi war criminal Dr Christian Szell over a briefcase of missing diamonds.

One of the most sadistic dentistry scenes in cinematic history provides the more memorable moment of this 70s classic, which neatly draws upon Levy’s memories of the heroic feats of two-time Olympic marathon champion Abeba Bikila to help him escape from the bad guys.

The Academy Award-winning classic focuses on the stories British sprint duo Eric Liddell and Harald Abrahams on their journey to gold medal success at the 1924 Paris Olympics.

Liddell wins the 400m title for the glory of God. Abrahams, a British Jew, overcomes prejudice to clinch victory in the 100m. All played out to Vangelis’ iconic soundtrack, it is quite simply the most iconic running movie in history.

A predictable plot should not detract from this moving, funny British rom-com.

Simon Pegg plays 'Fatboy' Dennis, the affable middle-aged loser who attempts to run a marathon to prove his worth to ex-fiancee Thandie Newton – whom he jilted at the altar.

Runners everywhere will appreciate the comedic references to everything from ‘hitting the wall’ to painful blisters.

The better of two biopics on the mythologised life of US running maverick Steve Prefontaine.

The Tom Cruise-produced movie focuses on the relationship between Prefontaine (Billy Cruddup) and his coach and Nike co-founder Bill Bowerman (Donald Sutherland). Without Limits explores the gutsy front-running tactics of Prefontaine, his disappointment at the 1972 Munich Olympics and fatal car crash.

The film of the life of Ethiopian distance running icon Abebe Bikila has much to admire.

The film focuses on his 1960 marathon triumph at the Rome Olympics, which he won barefoot to become the first sub-Saharan African to win an Olympic gold medal, and his subsequent defence of the title in Tokyo.

The Athlete also charts Bikila's paralysis following a car accident in 1968 and his journey to later competing in archery, table tennis and winning a cross country sleigh race before his premature death.

The Emmy Award-winning made-for-TV movie is another which combines prison with running life.

Larry 'Rain' Murphy (Peter Strauss), who is serving a life imprisonment for the first degree murder of his abusive father, relieves the boredom of prison life by running laps around the prison recreation yard. A prison warden spots his talent and allows the felon to train for the Olympic Trials.

Featuring Olympic hurdler Patrice Donnelly in one of the lead roles, this 1982 movie focuses on a group of women trying to qualify for the 1980 Moscow Olympics.

However, the subsequent boycott by the USA of the Games for political reasons means the group is left with the consolation of just their personal best performances.

Many track and field stars of the day play in the film including 1972 Olympic marathon champion Frank Shorter and 1984 Olympic 100m gold medallist Evelyn Ashford.

Kevin Harrington plays the 61-year-old Australian potato farmer Cliff Young who captured the hearts of a nation by beating the world’s best distance runners in the inaugural Sydney to Melbourne ultramarathon in 1983.

The vegetarian, tee-total, virgin, who lived with his mother, defied the odds to claim a famous victory by running for 18 hours a day.

Not exclusively a running movie but one which has running at its core, young Australian sprinter Archy (Mel Gibson) has his track career shelved due to World War I.

During the course of the movie, Archy is forced to use his gifts by running messages through the trenches. An inspiring, backs-against-the-wall war movie with a large dollop of running action.