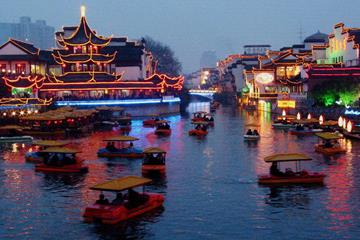 Nanjing will be the centre of the athletics universe in March when the World Athletics Indoor Championships come to town, and those who make the trip to this culturally rich and bustling Chinese city won’t be disappointed.

The capital of the Jiangsu province, it has a rich heritage, lying on the lower stretches of the Yangtze River. But while it boasts no shortage of ancient relics, it has very much advanced to the 21st Century, with a population today of more than eight million and a skyline of soaring skyscrapers.

This will be the first time in its 18 editions that the World Indoors take place in China and with the hosts having medal hopes across a range events, there should be a raucous atmosphere in the Nanjing Olympic Sports Centre Gymnasium for the three-day event, which begins on 13 March.

But what should athletics fans see and do, eat and drink, on their visit to Nanjing? We’ve got you covered.

Getting to the venue

The 13,000-seater arena is located in the Nanjing Olympic Sports Centre, a huge facility covering over 400,000 square metres which is located in Hexi New City.

It’s accessible by public transport, and Nanjing has a hugely efficient, rapidly expanding metro system that runs from the centre of the city out to the suburbs. A stored value transport card is available for a deposit of 25 yuan (€3) with a minimum top-up of 50 yuan (€6). This can be used on buses, the metro and in taxis.

If you want to be close to the competition venue, there are a handful of good options within walking distance. One such place is the Jumeirah Nanjing Hotel which is 2km to the southwest of the Olympic Sports Centre Gymnasium, with double rooms costing approximately €100-€120 (US $110-$130) per night. Most hotels in Nanjing are geared towards domestic tourists, so it’s worth having a translation app at the ready if you don’t speak the language or else check with the hotel before if you fear something will get lost in translation. The most popular areas for tourists to stay in are Gu Lou, Xuan Wu and in the commercial centre, Xinjiekou. For those on a tight budget, there are a horde of options in chain budget hotels which usually cost less than 200 yuan (€25/$28) per night.

Nanjing was the capital of 10 Chinese dynasties, including the Ming dynasty from 1368 to 1421. About one third of the Ming City Wall still stands today and visitors can stroll along this 600-year-old structure by accessing it at one of three former gates: Zhonghuamen, Taicheng or Shitoucheng. The first two charge a small admission fee with the latter free.

Other popular sites include Sun Yatsen’s Mausoleum on Zijin Mountain, the Presidential Palace, Ming Emperor Tomb and the Memorial Hall of Victims in Nanjing Massacre. The Qixia Temple is also popular, while also worth visiting is the Xuanwu Lake Park, which was the largest imperial lake garden in China’s history. In an area that’s famous for historical landscapes, mountains and waters, it’s worth taking a trip to Purple Mountain and Xuanwu Lake to take in the splendid scenery.

If you’re sufficiently motivated after watching the world’s best athletes strut their stuff indoors, it’s worth venturing into Nanjing’s great outdoors to follow their lead. The city has plenty of great places to walk or run. A lap of the complex at the Nanjing Olympic Stadium, which stands alongside the competition venue, totals about 3km and is free from the traffic and congestion you’ll encounter elsewhere.

Purple Mountain is a hugely popular site for runners and walkers to the east of the city and along with being a lush green oasis away from the noise, it contains more than 200 heritage sites. Another good option is to do a loop around Xuanwu Lake, which is 9.2km in total, or to run along the path parallel to the Ming City Wall. For a small fee you can also enjoy a run along the top of the wall. Although the surface is cobbled, it’s not too bumpy and in October this year more than 3,000 participants took part in the Nanjing Qinhuai City Wall Marathon. What better way to take several steps back in time?

Nanjing is said to be the original home to Peking duck, which the Ming Dynasty brought north while moving the capital to Beijing in 1421. Xushang Xunfu is one of the few restaurants that carry the traditional Nanjing roast duck. Yanshuiya is a city speciality: it’s duck cooked in brine which is then hung to dry for three days and served as chops, with the Plum Garden Restaurant in Jinling Hotel a good option to get the authentic thing for about 200 yuan (€25/$28).

Don’t be afraid to sample the street food scene, with the Confucius Temple area and Shiziqiao Food Street the best areas to do so. There you can try local classics like steamed buns stuffed with pork, sesame pancakes and duck blood soup with fried tofu and vermicelli.

Where to grab a drink

China is, of course, a tea drinker’s paradise, though whatever your preference is with hot drinks you won’t have trouble finding your fix in Nanjing. For a great tea or coffee between sessions of athletics, Victoria Bay Cafe in Xinjiekou is worth a visit, as is the nearby Fish Tank Cafe. Skyways Bakery and Sculpting in Time Cafe are other great options that have an assortment of hot drinks and snacks with a laid-back vibe.

If you’re still wide awake after the athletics and looking to keep your buzz going, Nanjing has some great options to party the night away. There is a big cluster of bars and clubs around Shanghai Road and 1912 (54 North Taipang Road), an entertainment complex with revamped villas. American-owned Jimmy’s on Shigu Road and Australian Blue Sky are popular sports bars that draw an expat crowd. Zuo Bar in the 1912 complex is well known for its cocktails while Sancho Panza is renowned for live music.