Kristjan Ceh and Malaika Mihambo led some fierce field performances at the Wanda Diamond League meeting in Birmingham on Saturday (21), while some top track battles also set the tone for the season ahead.

Four meeting records fell and six world leads were set on a busy afternoon of action at the newly renovated Alexander Stadium, which will welcome fans again later this year for the Commonwealth Games.

All three Tokyo medallists were in action in the men’s discus but it was Slovenia’s Ceh who stole the spotlight this time. The 23-year-old had a breakthrough 2021, improving his PB to 70.35m and finishing fifth on his Olympic debut. But the European U23 champion started another chapter in his success story in Birmingham, launching the implement 71.27m to improve his best by almost a metre and move to 10th on the world all-time list.

That world-leading third-round throw broke the Diamond League record and Ceh's own Slovenian record to cap an impressive series that also featured marks of 69.33m, 69.10m, 66.77m, 65.28m and 63.11m. Four of his top throws would have been enough to win in a contest that saw Lithuania’s 2017 world champion Andrius Gudzius secure the runner-up spot with 66.40m and Sweden’s Olympic and world champion Daniel Stahl finish third with 65.97m.

"Well, that was totally unexpected," said Ceh. "To get a world lead, national record, meeting record and Diamond League record is amazing. To get a PB was my first goal of the season, so now I need to raise the bar of my goals."

Mihambo enjoyed a similarly dominant performance in the women’s long jump, soaring a world-leading meeting record of 7.09m (0.0m/s) to start her season in style and finish top in a world-class field. 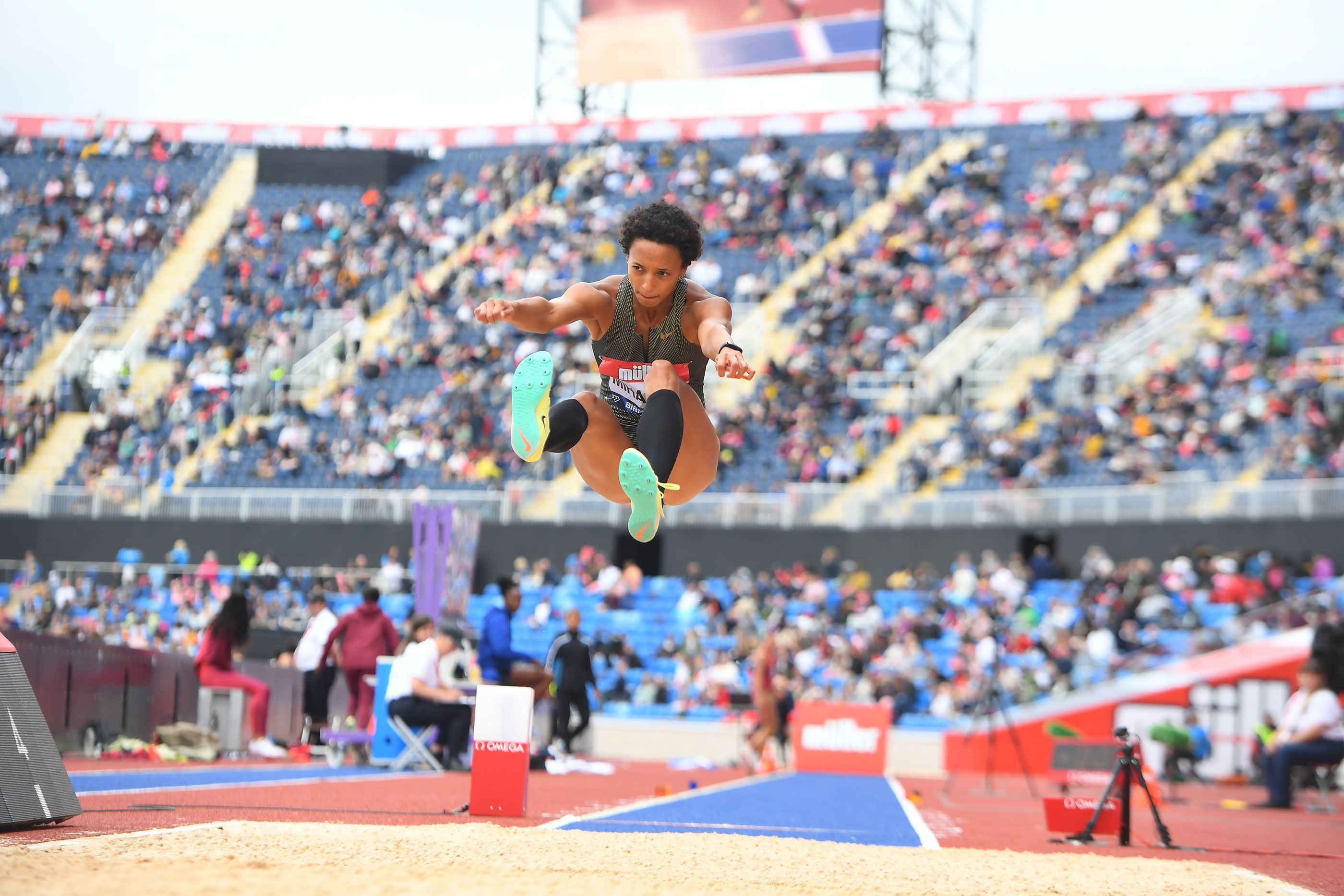 Germany’s Olympic, world and European champion spent the winter working on her speed and it seems to have paid off as she achieved her furthest leap since 2019 – the year she set her PB of 7.30m when winning world gold in Doha.

She will now look to build on that in a season where she has the chance to defend her world crown in Oregon in July and European title on home soil in Munich in August.

Mihambo’s 7.09m came in the fourth round of the competition and she backed it up with a wind-assisted 7.06m (3.0m/s), plus jumps of 6.78m and 6.56m. Ukraine’s world silver medallist Maryna Bekh-Romanchuk was back in long jump action after claiming triple jump silver at the World Indoor Championships in Belgrade and then finishing second in that discipline at the Diamond League opener in Doha. She again secured the runner-up spot, jumping 6.66m (0.8m/s), while Britain’s world indoor bronze medallist Lorraine Ugen was third with 6.65m (1.4m/s).

Valarie Allman was another Tokyo Olympic champion to finish on top in Birmingham, winning an exciting women’s discus contest. After claiming her Olympic crown last year, the US thrower has picked up from where she left off in 2022 and continued her strong start to the season on Saturday.

The 27-year-old threw 71.46m in San Diego last month to add 30 centimetres to her own North American record and move to 15th on the world all-time list. She followed that with 69.46m a week later in California and in Birmingham she triumphed with her second-round throw of 67.85m.

Her unbeaten season looked like it may be under threat when Croatia’s Sandra Perkovic responded strongly in the final round, but it wasn’t quite enough to pip Allman. The multiple global gold medallist recorded 67.26m to comfortably secure the runner-up spot ahead of USA’s Laulauga Tausaga with 60.80m.

Field event drama also featured in the women's pole vault, where a last-gasp clearance of 4.73m saw USA’s Sandi Morris improve her own world lead by a centimetre. The two-time world indoor champion needed two attempts at 4.45m, 4.55m and 4.65m but triumphed when she soared clear at 4.73m at the last time of asking. Rio Olympic gold medallist Katerina Stefanidi of Greece and Slovenia's world indoor bronze medallist Tina Sutej both managed 4.65m on their first try but finished joint second when they were unable to make it over the eventual winning height.

The men's high jump ended in delight for Canada’s Commonwealth bronze medallist Django Lovett, as he saw off the challenge of Italy’s Olympic gold medallist Gianmarco Tamberi. Lovett cleared 2.28m on his first attempt, while Tamberi took second place on countback when he leapt 2.25m, the same height as Poland’s Norbert Kobielski.

Hansle Parchment has been encouraged by his coach to target the Commonwealth Games in August and should he follow that plan then he will return to the Alexander Stadium with some happy memories. 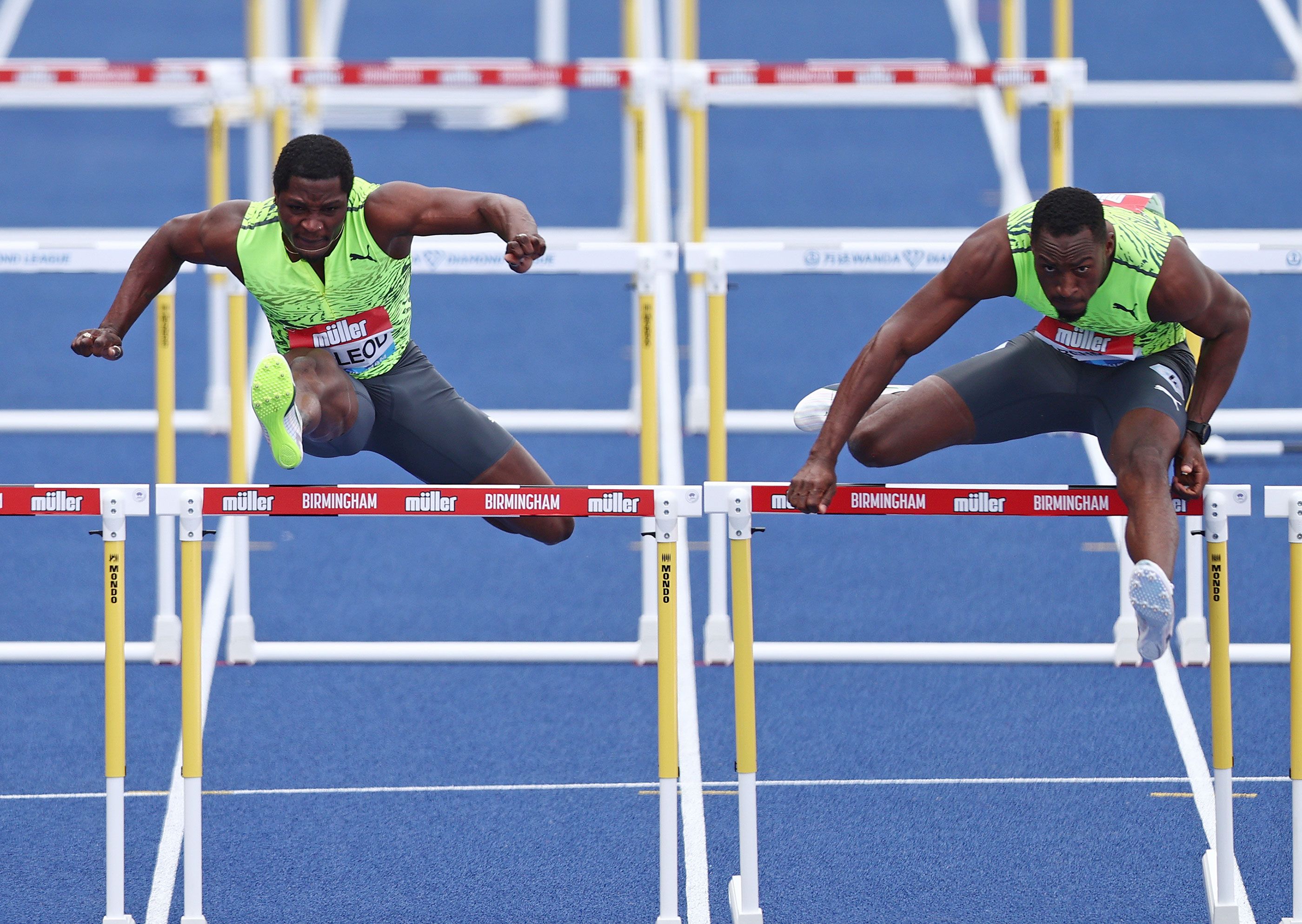 “I am pleased with a world lead, but it is very early in the season so you can’t read too much into it at the moment,” said Parchment. “It was a great turnout here, more than I expected, and there will be even more here at the Commonwealth Games with perhaps more Jamaicans making some noise and bringing their own vibes!”

There was certainly lots of noise for the women’s 100m, with home star Dina Asher-Smith taking to the track. Lining up as part of a strong field, the British record-holder delighted the fans with her win, but it was close. Running 11.11 (01.m/s) in her first 100m since September’s Diamond League final in Zurich, she pipped Jamaica’s Olympic 100m bronze medallist Shericka Jackson by 0.01.

“Being British, I wanted to come to Birmingham in this beautiful new stadium and put on a show,” said Asher-Smith. “There was a very strong field. I could have done a few things differently if I am being picky, but I'm very happy to win in this temperature and against this field.” 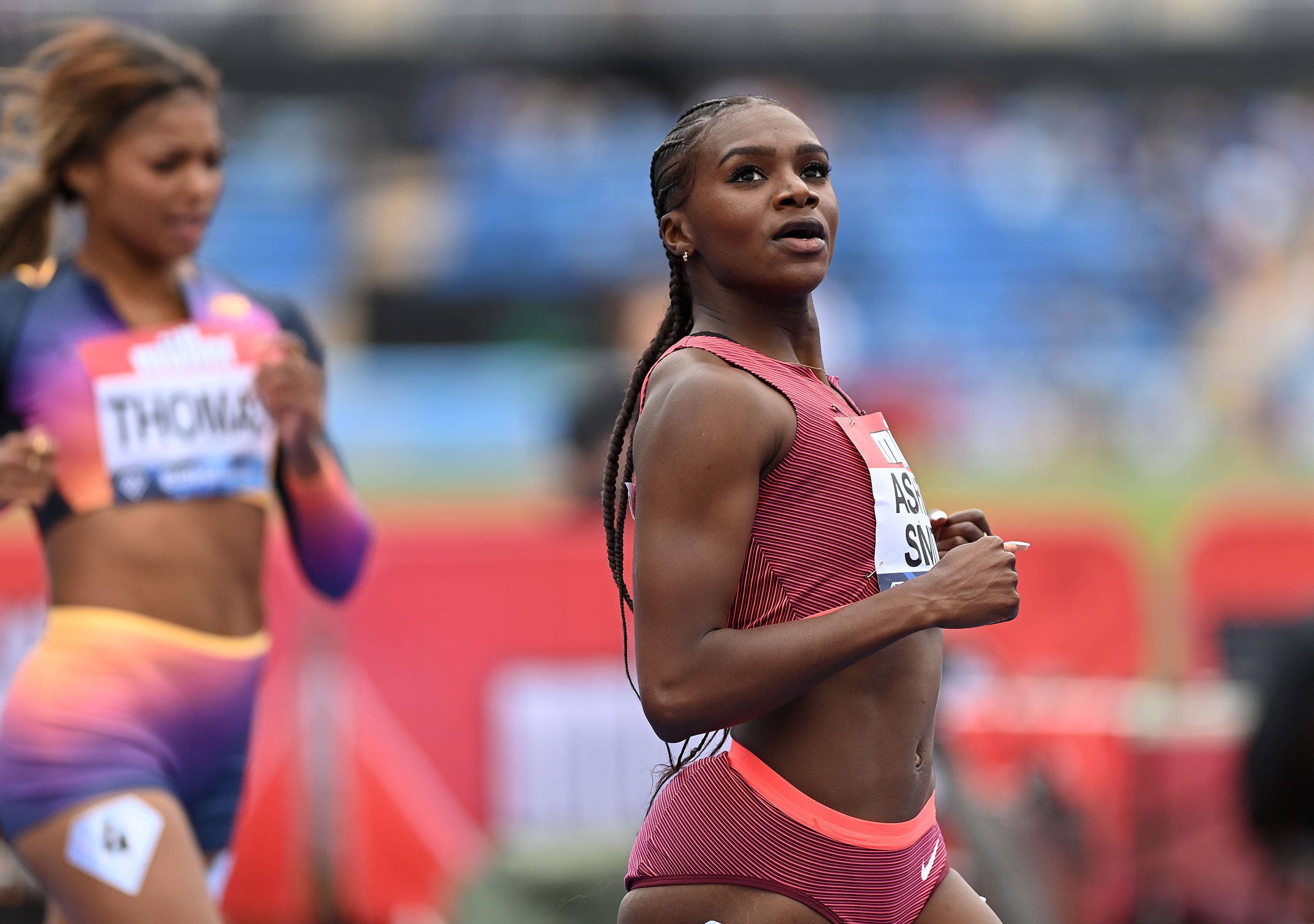 Asher-Smith and Neita returned to the track an hour and a half later to form part of Britain’s meeting record-breaking 4x100m team. Combining with Beth Dobbin and Imani Lansiquot, they clocked a world lead of 42.29, while the men’s relay was won by Canada in 38.31.

That Canadian 4x100m team featured Aaron Brown, Jerome Blake, Brendon Rodney and Andre De Grasse and it capped a busy but successful afternoon for Brown, who finished second in the B 100m before winning the A race and then the relay.

“Originally I was just coming to do the relay and then it just so happened I asked to get in the 100m and they put me in the B race,” said Brown. “Then the A race opened up so I did all three and it paid off.”

In a 400m hurdles clash featuring five of the Tokyo Olympic finalists it was USA’s silver medallist Dalilah Muhammad who cruised to victory.

The world champion and former world record-holder opened her season in her specialist event with 53.88 in Des Moines at the end of April but this time it was all about getting the win. Edging ahead early on, the 32-year-old continued to move away from her rivals and crossed the finish line for victory in 54.54.

Like Asher-Smith in the women’s 100m, local favourite Matthew Hudson-Smith was also hoping to put on a good show for the home fans. The European champion, who runs for the host club Birchfield Harriers, did just that by winning the 400m in 45.32 ahead of USA’s Bryce Deadmon (45.51).

Home wins for Hodgkinson and Muir, meeting record for Seyaum

All eyes were on Olympic silver medallist Keely Hodgkinson in the 800m as she returned to action for the first time since withdrawing from the World Indoor Championships in Belgrade through injury.

The British record-holder claimed a winning comeback, clocking 1:58.63 as she led from start to finish and won ahead of Renelle Lamote of France, competing for the first time since the Tokyo Games. Lamote also dipped under two minutes with 1:59.53, while Jamaica’s Natoya Goule was third in 2:00.13.

Hodgkinson will next compete at Saturday's Diamond League meeting in Eugene, where she will go head-to-head with USA's Olympic champion Athing Mu. 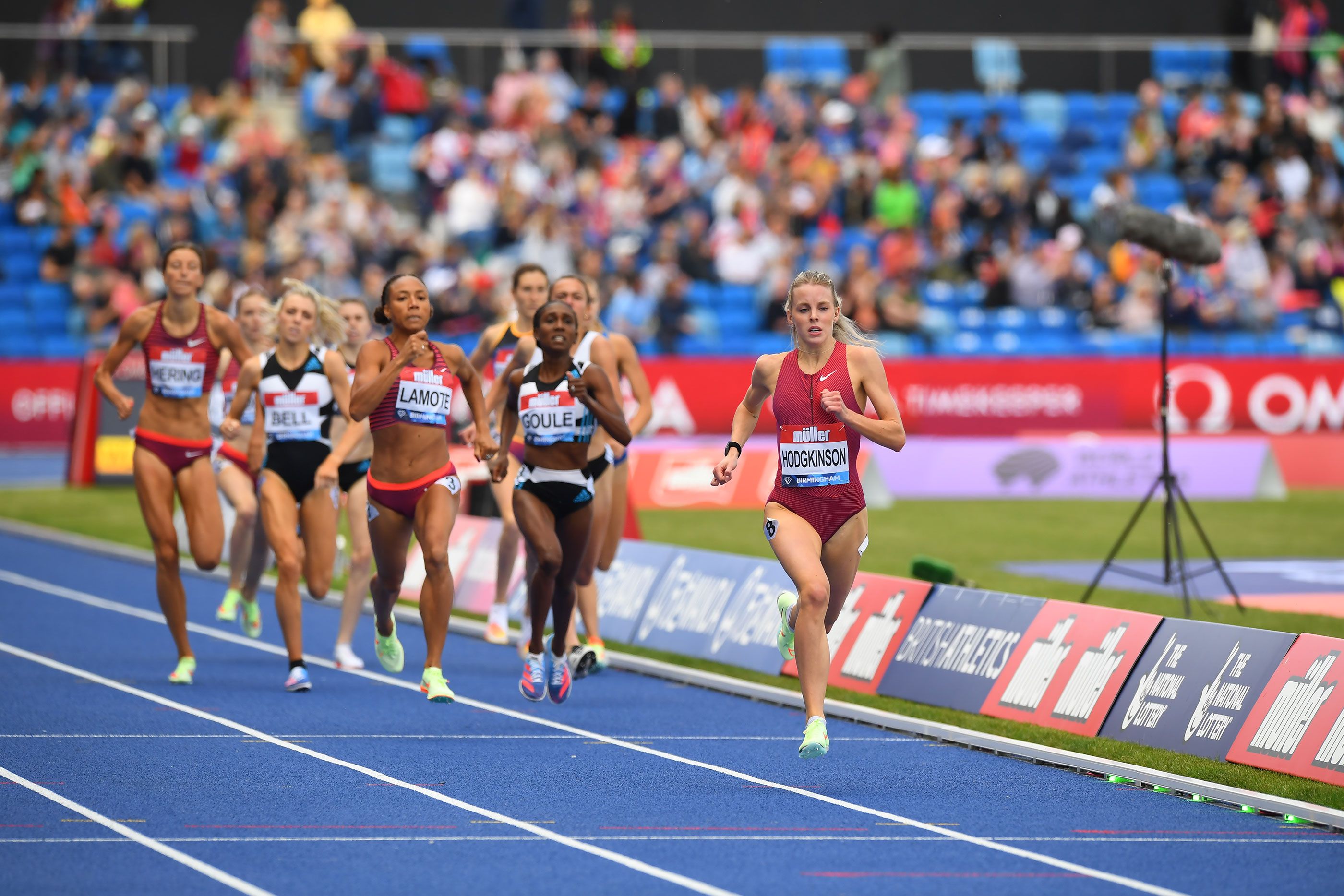 Laura Muir was also roared to a win on home soil in the women’s 1500m, Britain’s Olympic silver medallist clocking 4:02.81 to hold off the challenge of Australia’s Jessica Hull.

Pacemaker Ellie Sanford led the field through 400m in 1:04.66 and 800m in 2:09.64, with Muir and Hull right behind her. Muir forged ahead as Sanford left the track, with Hull on her shoulder. But Muir kicked with 150m to go to secure victory as she returned to 1500m racing for the first time since the Prefontaine Classic last August.

The field followed the pacemaker through the first kilometre mark in 2:56.85 and Worku led through 3000m in 9:02.90. She remained to the fore until the final lap when Seyaum kicked away to win in her first ever track 5000m.

It was Canada’s Marco Arop who kicked to victory in the men’s 800m, to defeat a field featuring two Tokyo Olympic medallists. The world finalist had followed the pack through 400m in 50.49 and then made a move with 200m to go, surging ahead to win in 1:45.41.