When the Bislett Games gets under way on Thursday (16) there will be less than a month to go until the World Athletics Championships Oregon22. And with only two other Wanda Diamond League meetings on the calendar before the athletics world descends on Eugene, many of the world’s best athletes will be in action in Oslo as they gear up for the peak of the season.

While Norway’s Olympic 400m hurdles champion Karsten Warholm has been forced to withdraw following the injury he picked up in Rabat, it has not dented the overall quality of a meeting that boasts 19 medallists from the Tokyo Games, including six Olympic champions.

And the presence of Jakob Ingebrigtsen in the Dream Mile means that the home crowd will still get to cheer on one of the country’s biggest athletics stars.

Ingebrigtsen will be doubly keen to win on Thursday as he has never won the senior Dream Mile in Oslo (although he won it in 2017 when it was an U20-only event). The likes of Britain's Jake Wightman, Mohamed Katir of Spain, Australia’s Oliver Hoare and Luxembourg’s Charles Grethen will line up against the 21-year-old Norwegian.

Ingebrigtsen is one of four Olympic champions in Oslo who’ll be heading to the Norwegian capital as the world leader in their discipline, alongside Mondo Duplantis, Valarie Allman and Wojciech Nowicki.

Duplantis, who increased his own world record to 6.20m when winning the world indoor title in Belgrade in March, has maintained his winning streak since the start of the Diamond League season. He won in Doha with 6.02m, followed it with a 5.91m victory in Eugene and then returned to six-metre form with a 6.01m triumph in Hengelo.

He set a meeting record of 6.01m in Oslo last year, and the 22-year-old Swede is highly motivated by constant improvement, so he’ll be keen to go one better on Thursday. The field includes the 2016 and 2012 Olympic champions, Thiago Braz and Renaud Lavillenie, as well as two-time world champion Sam Kendricks and leading Norwegian vaulters Pal Haugen Lillefosse and Sondre Guttormsen.

The hammer may not be a Diamond League discipline, but it boasts one of the strongest fields of the evening as it reunites the top four from the men’s final in Tokyo: Wojciech Nowicki, Eivind Henriksen, Pawel Fajdek and Mykhaylo Kokhan. 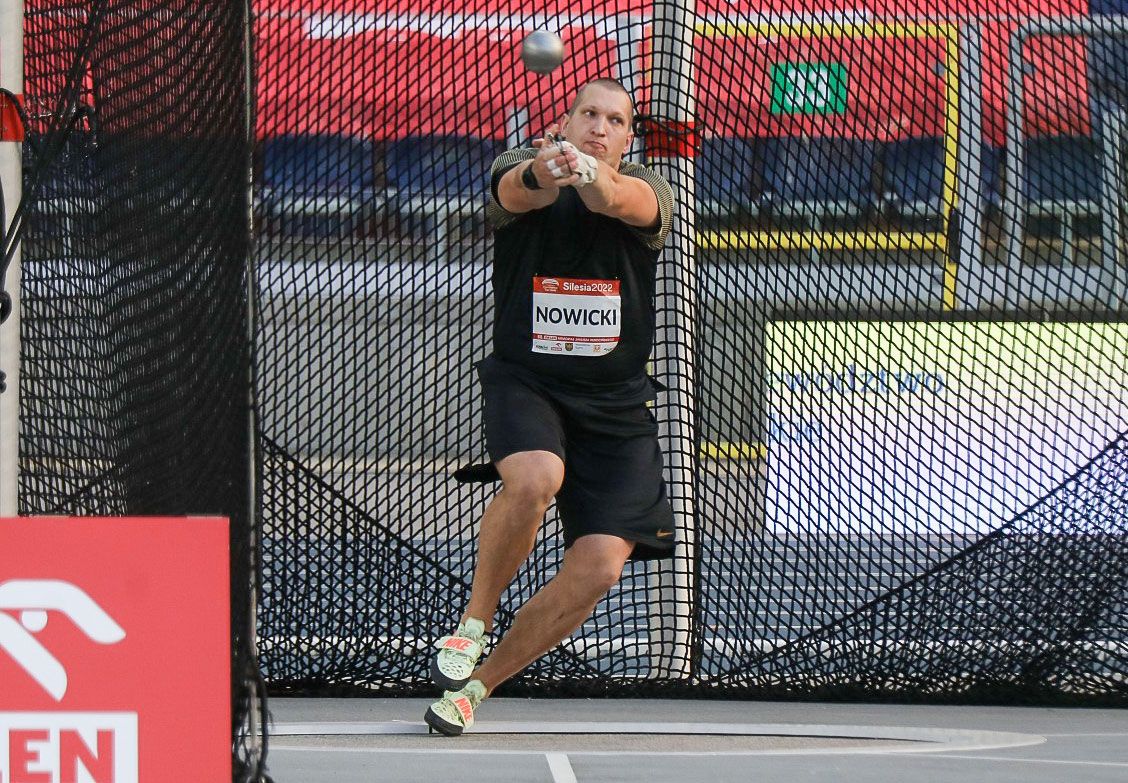 Wojciech Nowicki in the hammer in Silesia (© Marta Gorczynska)

Olympic champion Nowicki has dominated the event so far this year, winning four of his five competitions and posting world-leading marks in Nairobi (81.43m) and Silesia (81.58m). But the Pole hasn’t been so dominant to assume that victory in Oslo will be a foregone conclusion.

Allman has been similarly impressive in the discus. The Olympic champion owns the eight best throws in the world this year, topped by her North American record of 71.46m. But multiple global champion Sandra Perkovic, who will also be in Oslo, came within 59 centimetres of Allman in Birmingham. Olympic silver medallist Kristin Pudenz, meanwhile, has been close to PB form this year and has the potential to cause an upset in Oslo.

Hurdling events have produced some of the biggest highlights of recent editions of the Bislett Games and that trend could well continue on Thursday.

Fresh from his stunning 12.84 run in New York to move to third on the world all-time list, Devon Allen will line up in the 110m hurdles in Oslo, his first race outside of North America this year. The US athlete is treating 2022 as his final season before embarking on a career in the NFL, but before making that switch he is gearing up for one final hurrah at the World Championships in Oregon, home of his alma mater.

After years of the focus being on Warholm and Rai Benjamin, young Brazilian Alison dos Santos is fast becoming the talk of the men’s 400m hurdles.

The Olympic bronze medallist, who turned 22 earlier this month, is undefeated in this event this year. He set a season’s best of 47.23 in Eugene at the end of May, but his 47.24 victory in Doha – on an evening of challenging blustery conditions – was perhaps even more impressive. They’re the second and third-best performances of his career so far, behind the 46.72 PB he clocked in Tokyo to move to third on the world all-time list. 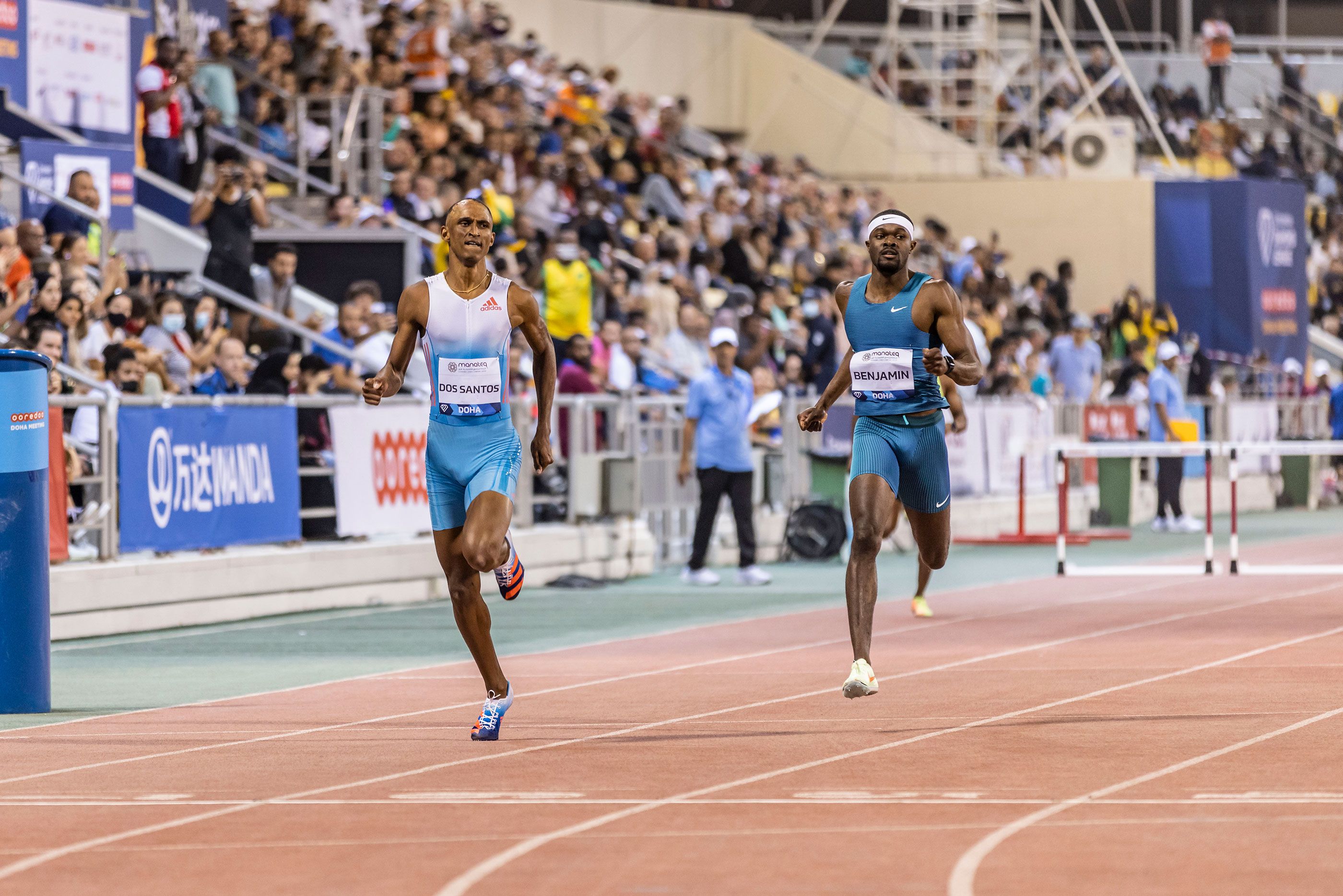 The vastly experienced Rasmus Magi improved his Estonian 400m hurdles record to 47.82 in Turku on Tuesday, while Sweden’s world indoor bronze medallist Carl Bengstrom has also already set a PB of 48.52 this year and could be one to watch in this race. Yasmani Copello should also be in contention.

Dos Santos’s fellow Olympic bronze medallist Femke Bol headlines the women’s 400m hurdles. The Dutch athlete kick-started her outdoor campaign by smashing the world best for 300m hurdles, clocking 36.86 in Ostrava, and then followed it with wins of 53.94 and 53.02 for the full one-lap event in Hengelo and Rome respectively.

Ukrainian duo Anna Ryzhykova, a sub-53-second performer at her best, and Viktoriya Tkachuk should feature near the front of the race, as could British pair Jessie Knight and Lina Nielsen.

Multiple world record-holder Letesenbet Gidey will be out to achieve her first victory of the year following runner-up finishes in Eugene and Hengelo.

The Ethiopian, who holds world records for 5000m, 10,000m and the half marathon, takes on a handful of her leading compatriots in the 5000m, including world indoor 1500m champion Gudaf Tsegay, 2015 world champion Almaz Ayana and 2016 world indoor silver medallist Dawit Seyaum. Britain’s Eilish McColgan, who beat Gidey over 10,000m in Hengelo earlier this month, is also in the line-up. 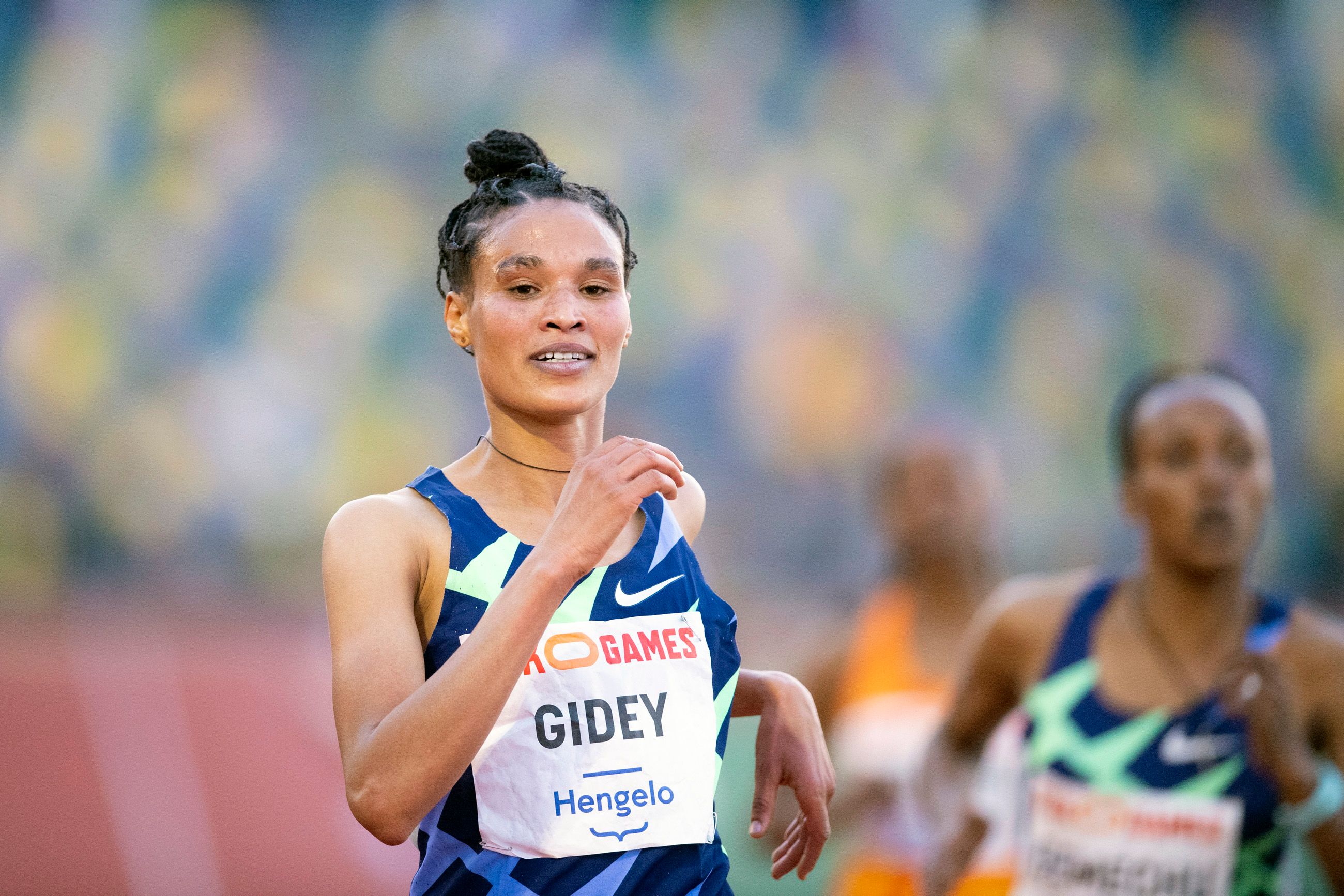 Following a promising debut at the distance in Eugene last month, two-time world indoor 1500m champion Samuel Tefera will contest the second 5000m race of his career. The 22-year-old Ethiopian clocked 13:06.86 at the Prefontaine Classic to finish second to Berihu Aregawi. While Aregawi is skipping Oslo, three other Ethiopians with sub-13-minute PBs are in the field: Getnet Wale, Telahun Haile Bekele and Milkesa Mengesha.

Olympic silver medallists Keely Hodgkinson and Laura Muir will race over two laps of the track. The British duo has raced each other just once before, Hodgkinson getting the verdict on that occasion at the national championships last year. The 20-year-old goes into this race as the fastest entrant too, having clocked a season’s best of 1:57.72 when winning in Eugene last month.

Ethiopia’s Diribe Welteji, also aged just 20, goes into the race in good form too, having set a personal best of 1:58.28 for 800m and a season’s best of 3:59.19 for 1500m. Uganda's world champion Halimah Nakaayi, Jamaica’s Natoya Goule, Britain’s Jemma Reekie and France’s Renelle Lamote will ensure the race is super competitive.

The long jump showdown between Olympic champion Miltiadis Tentoglou and rising decathlon talent Simon Ehammer was one of the more exciting duels at the recent Wanda Diamond League meeting in Rabat. 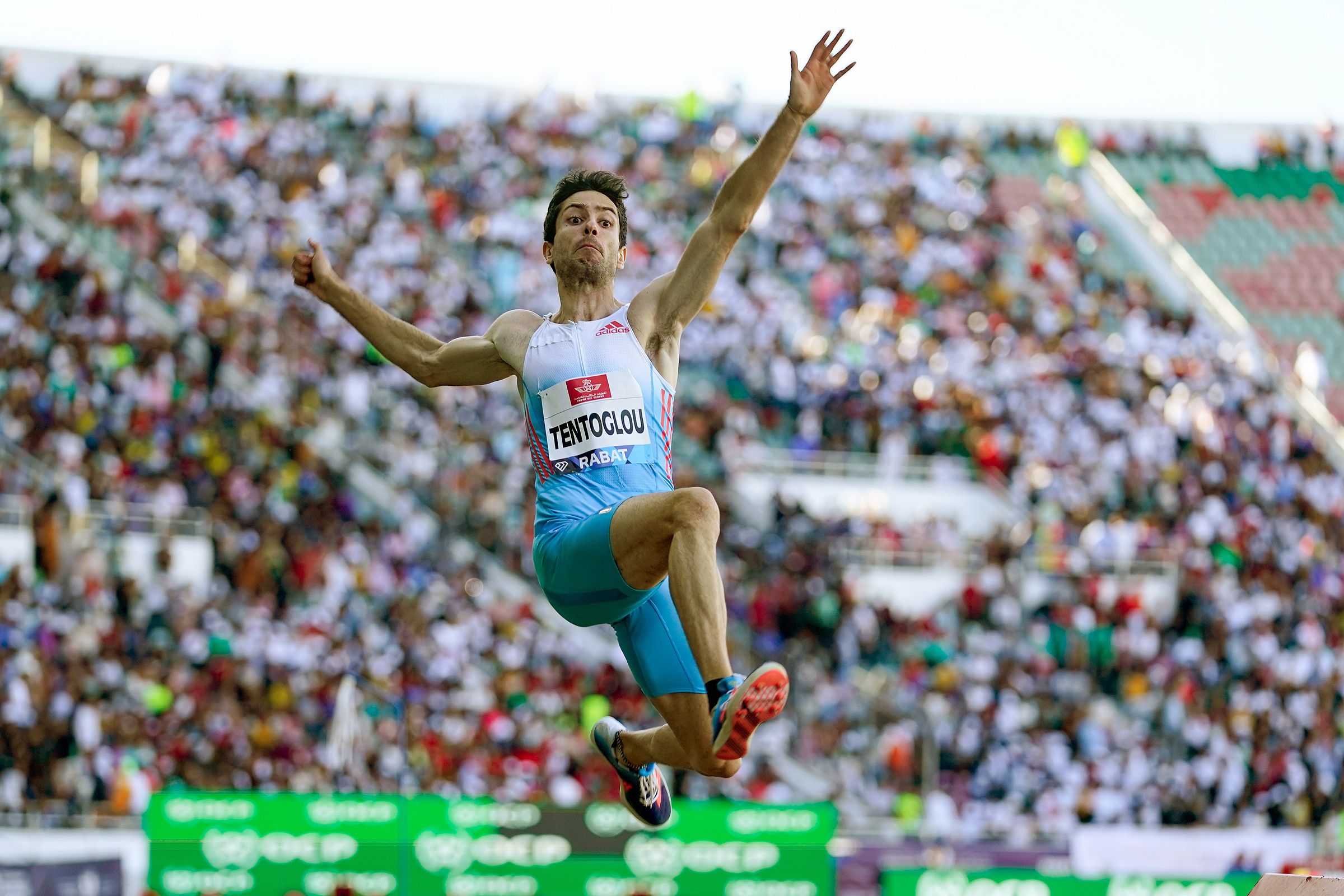 Tentoglou won on that occasion, but the Greek had to work hard to overtake the Swiss all-rounder. World indoor champion Tentoglou has built up a nine-strong winning streak and he won’t want to lose it to a non-specialist. That said, Ehammer is quite some decathlete, and his world decathlon best of 8.45m still leads the world list for this year. If he reproduces that form in Oslo, he’ll be tough to beat.

Uruguay’s Emiliano Lasa and Sweden’s Thobias Montler will also be in the hunt to bag Diamond League points on the road to the final.

The women’s shot put will be a rematch of the World Indoor Championships final as it reunites the top eight finishers from there. Much of the focus will fall on world indoor champion Auriol Dongmo and world leader Chase Ealey, but the likes of Jamaica’s world silver medallist Danniel Thomas-Dodd, USA’s Maggie Ewen, Canadian record-holder Sarah Mitton, Dutch record-holder Jessica Schilder, and Swedish record-holder Fanny Roos have all thrown beyond 19 metres this season.

Half of the men’s 400m field earned medals of some sort in Tokyo last year. Olympic bronze medallist Kirani James goes into the race off the back of a 44.54 victory in Rome and a 44.02 season’s best in Eugene. He’ll face three Olympic relay medallists in the form of Botswana’s Isaac Makwala, the much-improved Alexander Ogando of the Dominican Republic and Liemarvin Bonevacia of the Netherlands.

Olympic 200m champion Andre De Grasse has raced in Oslo three times before and has won every time, taking the 100m in 2016 and 2017 and the 200m in 2021. The Canadian steps back down to the shorter sprint this year and will be keen to maintain his unbeaten record in the Norwegian capital as he takes on Britain’s Reece Prescod – winner in Ostrava in a 9.93 PB – plus Ghana’s Benjamin Azamati and South Africa’s Akani Simbine. 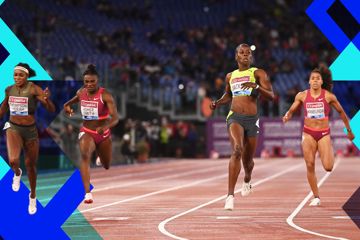 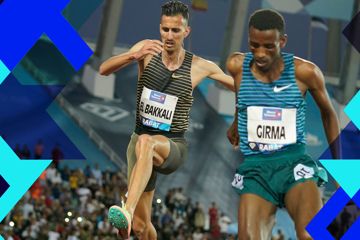 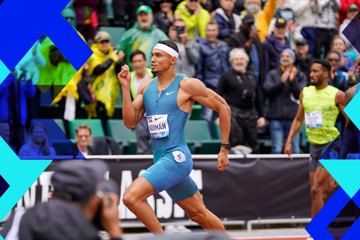