Sulek’s winning score of 6290 was just 25 points shy of her lifetime best. Kopecky, meanwhile, gave himself an early birthday present – he turned 24 the day after the competition – and added more than 400 points to his PB with his 8041 tally.

Sulek was the only heptathlete to dip inside 14 seconds in the 100m hurdles, opening her account with 13.70. An outdoor PB of 1.87m in the high jump increased her lead over Dorota Skrivanova of the Czech Republic.

Skrivanova – who finished fifth at the World Indoor Championships in Belgrade – topped the long jump with a leap of 6.24m, while Sulek managed 6.14m. But Sulek increased her lead in the javelin, throwing 40.37m to Skrivanova’s 32.91m.

“Were it not for the fact that this was the Wieslaw Czapiewski Memorial, I would have run the 800m in about 2:15, just enough to hold on to victory, but since this competition is in memorial of my former coach, there was no room for poor results,” said Sulek, who was coached by Czapiewski up until his death in 2019. “I decided to run my lungs out and fight in the 800m. My score may have been just short of my PB, but I know that I gave 100% today. And in the near future I’ll be faster and stronger.”

Kopecky got off to a strong start in the decathlon, winning the 100m in 11.06 and the long jump with a PB of 7.47m. Poland’s Pawel Wiesiolek (14.85m) and Lithuania’s Edgaras Benkunskas (14.64m) applied pressure in the shot put, but Kopecky’s 13.46m heave was enough for the Czech all-rounder to maintain his lead.

Wiesiolek took no further part in the competition, but Benkunskas took the lead after clearing 2.04m in the high jump. Kopecky managed 1.89m but rebounded in the 400m with a big PB of 48.54, giving him a first-day score of 4057, 66 points ahead of Benkunskas.

Benkunskas gained a bit of ground in the javelin, throwing 61.11m to Kopecky’s 57.86m, but the Czech leader had a comfortable lead going into the 1500m and duly won that event in 4:43.42, gaining the overall victory with 8041. Benkunskas finished second with 7689.

BACK
Pages related to this articleAthletes
Ondrej Kopecky 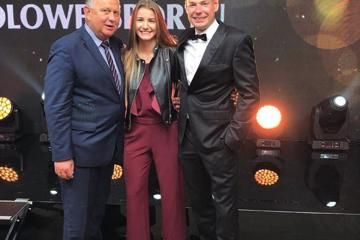