Dos Santos won last year’s edition in 48.15 and returned to crown a dream season in which he won the world title in Oregon in 46.29 and the Diamond Trophy in Zurich in 46.98. European silver medallist Wilfried Happio from France placed second with 49.06 ahead of European bronze medallist Yasmani Copello from Turkey (49.66).

“I came here just to win the race. I wanted to give 100%,” said Brazil’s Dos Santos. “The fans in Bellinzona are amazing and deserved a good performance.

“I love this city and the atmosphere of Bellinzona. I met children during the kids’ clinic on Sunday. That moment was very special as I want to be a role model for future generations.”

Joe Kovacs beat Ryan Crouser for the third time on Swiss soil in the past month with 22.19m in the men’s shot put. Crouser, who set the meeting record of 22.28m in 2019, opened with a throw of 22.00m and continued with 21.79m from his second attempt before four consecutive fouls. The two-time Olympic champion maintained his lead until the fifth round, when Kovacs produced the winning mark of 22.19m. The two-time world champion threw over the 21-metre barrier four times with 21.12m, 21.53m, 21.05m and 21.43m.

Kovacs moved to second on the world all-time list with 23.23m in Zurich last week, while Crouser turned the tables by winning in Zagreb with 22.19m.

Marie-Josee Ta Lou from Ivory Coast stormed to a win in the women’s 100m in 10.86, missing  Shelly-Ann Fraser-Pryce’s meeting record by 0.08. Ta Lou has dipped under 11 seconds six times since 10 August, when she broke the African record with 10.72. This year’s European and Commonwealth bronze medallist Daryll Neita placed second in 11.00 ahead of Bassant Hemida from Egypt (11.07). World 200m champion Shericka Jackson had to settle for fifth place in 11.19.

“Today the main goal was to win and run a good time,” said Ta Lou. “I am tired after a long season. The crowd is very nice. It’s a beautiful place.”

World record-holder Wayde van Niekerk won a close head-to-head clash against this year’s Diamond League champion Kirani James in the men’s 400m, setting a meeting record of 44.33, his fastest time since 2017. James also dipped under the previous meeting record with 44.38.

“Tonight was a good performance,” said Van Niekerk. “The last three competitions in Europe came off a challenging World Championships in Eugene. I used a month to put in some good work and finished the season on a good note. I am pleased with that.”

“Since my Olympic title in Tokyo, my life has changed. This year has been challenging, but I managed to win the world bronze medal in Eugene,” said Camacho-Quinn.

“Running from the eighth lane, nobody cared about me, but I ran my own race,” said Carnes. “It is amazing to run in such a beautiful place surrounded by mountains.”

Olympic and world finalist Natoya Goule from Jamaica pulled away with 200m to go to win the women’s 800m in 1:59.08, one week after finishing second at the Zurich Weltklasse. World Championships finalist Anita Horvat finished second in 2:00.76 ahead of European bronze medallist Anna Wielgosz (2:01.24). 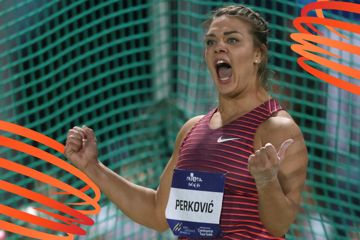 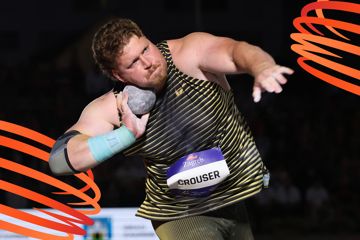 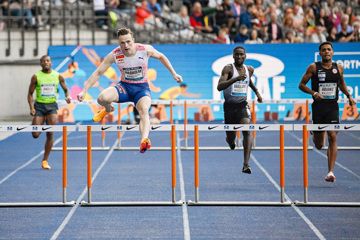