Korea’s Woo Sanghyeok continued his strong season with another impressive performance, while Australia’s Eleanor Patterson was in record-breaking form at the Banskobystricka latka high jump meeting in Banska Bystrica on Tuesday (15).

Ten days after his world-leading national record of 2.36m at the Skakani Hustopece, Woo was back in action at the World Athletics Indoor Tour Silver event in Slovakia and again came close to that mark.

This time the 25-year-old’s best was 2.35m to win ahead of world bronze medallist Ilya Ivanyuk and USA’s double NCAA champion JuVaughn Harrison.

Woo opened his campaign with a first-time clearance of 2.21m, before going clear at 2.25m, 2.28m and 2.31m on his initial attempts. The Olympic fourth-place finisher then needed two tries at 2.33m but achieved 2.35m on his first go, later having three attempts at a PB height of 2.37m.

Ivanyuk had needed all three tries to achieve 2.31m and so passed straight to 2.35m in an attempt to take victory. After knocking the bar twice he saved his last attempt for 2.37m but was unable to make it over and so finished second with his 2.31m clearance. Harrison’s 2.28m saw him place third ahead of Andriy Protsenko, Luis Enrique Zayas, Donald Thomas and Oleh Doroshchuk, who all managed 2.25m.

The women’s competition featured a successful indoor debut by Patterson, who cleared a world-leading 1.99m to break the Oceania indoor record.

In her first ever indoor contest, the 25-year-old matched the height of her outdoor PB to win ahead of Olympic and world medallist Yaroslava Mahuchikh and Olympic finalist Marija Vukovic, who both managed a best of 1.96m.

Olympic and world champion Mariya Lasitskene was among the four athletes to clear a best of 1.93m, finishing sixth on her season debut, which had been delayed due to illness.

Patterson had entered the competition at 1.80m, clearing that height and 1.85m on her first attempts. She needed three tries to make it over 1.90m and managed 1.93m on her second go, before soaring clear at 1.96m on her first attempt. Ukraine’s Mahuchikh had a perfect scorecard up to that point but couldn’t go any higher and when Montenegro’s Vukovic was also unable to make it over 1.99m, Patterson’s victory was confirmed.

The 2014 Commonwealth champion, who stepped away from the sport in 2018 but returned the following year and went on to finish fifth at last year’s Olympics in Tokyo, then had three attempts at 2.01m. Her 1.99m clearance adds two centimetres to the Oceania indoor record which had been set by Alison Inverarity in 1993.

The 1.96m was a season’s best for Mahuchikh, who won in Banska Bystrica last year with a clearance of 2.06m – the highest indoor jump in the world for nine years. For Vukovic, it was another national record mark to edge closer to her outright best of 1.97m achieved outdoors last year. Safina Sadullayeva finished fourth on countback ahead of Mirela Demireva, Lasitskene and Iryna Gerashchenko.

BACK
Pages related to this articleAthletes
Eleanor PATTERSON 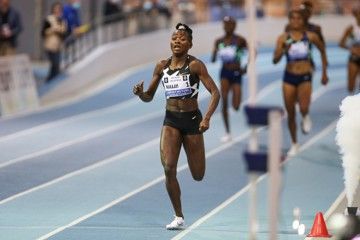 Nakaayi and Eaton win in Val-de-Reuil... 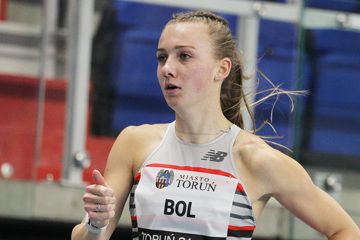 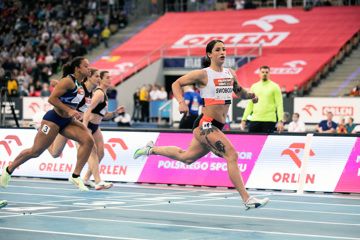