World leader Violah Jepchumba has her sights set on the course record at the Birell Grand Prix, while fellow Kenyan Daniel Chebii will chase his third victory at the IAAF Gold Label Road Race in Prague on Saturday (10).

Jepchumba has fond memories of the Czech capital. Earlier this year, the 25-year-old won the Sportisimo Prague Half Marathon in 1:05:51, making her the third-fastest half-marathon runner in history.

She also moved to third on the world all-time list for 10km in that race, after passing that checkpoint in a world-leading 30:29. Her time is a Czech all-comers’ record and just eight seconds shy of Paula Radcliffe’s world record for the distance.

In her first 10km race since her Prague triumph, Jepchumba – who won this year’s Istanbul and Gothenburg half marathons – will now have the opportunity to chase an even faster time, and the course record of 30:55 looks set to come under serious threat.

Jepchumba might have the fastest PBs of the field, but one advantage her opponents have is experience.

Kenyan compatriot Pascalia Kipkoech has been on the international scene since taking the 3000m silver medal at the 2003 IAAF World U18 Championships. Since switching to the roads, the 27-year-old took the bronze medal at the 2012 IAAF World Half Marathon Championships and showed good form earlier this year when finishing third at the Yangzhou Half Marathon in 1:07:58.

Ethiopian teenager Muliye Dekebo will attempt to break up the expected Kenyan dominance on Saturday. The Ethiopian teenager won this year’s Nice Half Marathon in 1:01:08 and followed it with a PB of 1:09:52 to win in Lugano one month later.

Race-walking specialist Anezka Drahotova will be one of the leading Czech athletes lining up on Saturday. The 2014 European 20km race walk bronze medallist, who recently finished 10th at the Rio 2016 Olympic Games, is also an accomplished runner and will try to improve on the 33:59 PB she set at this race in 2013.

In the men’s race, Chebii will aim to become the event’s first three-time winner, following his 27:35 victory in 2013 and his 27:42 triumph last year.

He will also want to make up for his 14th-place finish at the Sportisimo Prague Half Marathon earlier this year, when he clocked 1:03:45. A 27:55 win in Boston in June showed that he isn’t lacking in form.

Chebii will be defending his title against former marathon world record-holder Patrick Makau. Now 31, Makau may not be as fast or as consistent as he once was, but the Kenyan won the 2014 and 2015 editions of the Fukuoka Marathon so should still be respected.

The biggest challenge, though, looks set to come from Solomon Yego, who won this year’s Rome-Ostia Half Marathon in 58:44, the fastest time in the world this year. The 29-year-old Kenyan went on to make his marathon debut in Prague two months later, clocking 2:08:31.

Like Chebii, Daniel Wanjiru is no stranger to the streets of Prague. The 24-year-old has won the past two editions of the Sportisimo Prague Half Marathon, reducing his PB to 59:20 at this year’s event.

Kenneth Keter and Geofrey Kusuro also carry strong half-marathon form into Saturday’s 10km, having both bettered the one-hour mark for the 13.1-mile distance. Keter did so at this year’s Venloop Half Marathon in the Netherlands, where he started as a pacemaker and then never dropped out. 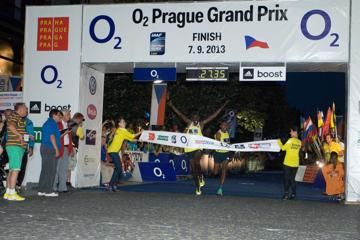 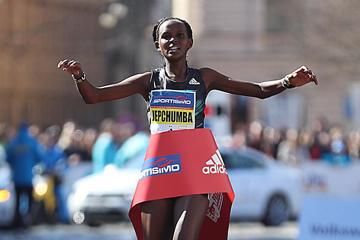