The Sanlam Cape Town Marathon has recruited five men who have run faster than 2:08:00 but most of the attention at the IAAF Silver Label Road Race will be focused on Japan’s Yuki Kawauchi on Sunday (20).

Kawauchi is one of the most intriguing runners on the international marathon circuit, as he is able to maintain remarkably consistent form at the highest level, despite holding down a full-time job.

The versatile 28-year-old, who is aiming for a place in the Japanese team for next year's Rio 2016 Olympic Games, has twice represented his country at the IAAF World Championships and was third at last year’s Asian Games.

A self-coached amateur, he holds the ‘world record’ for running a pair of sub-2:10 marathons just two weeks apart.

“My goal here is to win, at worst place in the top three with a time of 2:10 to 2:12, and from there it’s on to New York," said Kawauchi. "I see both the Sanlam Cape Town Marathon and TCS New York City Marathon as stepping stones towards the Fukuoka International Marathon in December, and selection for Rio Olympics."

Race ambassador Elana Meyer said: "We are delighted to host Yuki Kawauchi. He embodies the spirit of the classic marathon distance and we are excited to have him as part of our elite field."

The route for this year's race is flatter and faster than the course used for last year's inaugural edition of the relaunched event. The men's and women's records held by Kenya’s Willy Kibor Koitile (2:10:45) and Ethiopia’s Meseret Mengistu Biru (2:30:57) are expected to come under threat if weather conditions are favourable.

Among Kawauchi’s rivals are the Kenyan pair of David Kemboi Kiyeng and Peter Lotogor Kamais, both of whom have good marathon pedigrees.

Kiyeng, now 32 who apparently won his first marathon at the age of 17 when he won in Palermo, has a personal best of 2:06:26 and has run faster than 2:09:00 on no fewer than seven occasions. The last time he did that, though, was two years ago and he has struggled to find his best form in the past 18 months.

Kamais, 38, won the 2012 Xiamen Marathon in what is still his personal best of 2:07:27 but is another man who will be looking to put behind him a recent run of indifferent form. In his only other outing of 2015, he finished seventh in another Chinese marathon, the Yellow River event, in a modest 2:20:08.

"After receiving IAAF Silver Label status last year, we have put together a stronger elite field this year," added Meyer, the 1992 Olympic 10,000m silver medallist. "The course is probably a minute or two faster, so we're hoping for some of the fastest times ever set in Africa. We are also excited to see how our local athletes, many of whom are relatively new to the marathon distance, are able to hold up against a world-class line-up on home soil."

Girma Bekele clocked his best time of 2:06:46 when finishing fifth at the 2012 Amsterdam race but has not raced a marathon since finishing 14th in Seoul 18 months ago.

"The Cape Town Marathon is about a new start for me, because in 2014 I had several problems with injuries," said Girma Bekele. "I prepared well, training with some of the best marathoners in the world like Tsegaye Kebede, Getu Feleke and Abera Kuma."

By contrast, Debele Tulu has run two solid marathons in 2015, including finishing second in Mumbai, and has a best of 2:07:48 from when he won in the German city of Dusseldorf two years ago.

The attention in the women’s race focuses on USA’s Renee Metivier-Baillie, who has a best of 2:27:17 but will be racing only her third marathon, and Kenya’s Isabella Ochichi.

Ochichi, like Metivier-Baillie racing only her third marathon, is the 2004 Olympic 5000m silver medallist. Although the 35-year-old has moved up in distance late in her career and only has a personal best of 2:31:38, Cape Town may herald a breakthrough for her.

“It is wonderful to race at home, in Africa," said Ochichi. "I've been blessed to travel the world and I continue to do so and I hope that more and more events will take me across African continent.

"I was supposed to race a marathon in July, but due to family reasons I needed to cancel the race in Gold Coast, Australia," she added. "But I managed to keep my shape and I will go for a win and good time on Sunday." 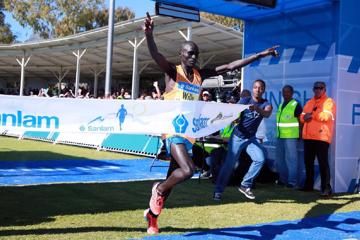