With several top-flight Ethiopian runners set to contest the Volkswagen Prague Marathon on Sunday (7), there’s a strong chance that the IAAF Gold Label Road Race could witness its first ever Ethiopian double.

On five previous occasions, Kenyan men and women have taken both titles on offer in the Czech capital. And while there have been five individual victories from Ethiopian athletes at the Prague Marathon, the east African nation has never managed a sweep of both titles.

That could change on Sunday, though.

Feyse Tadese is the fastest entrant for the women’s race. The 2012 world half-marathon silver medallist achieved three consecutive marathon victories from 2012 to 2013, winning in Seoul, Shanghai and Paris. She failed to finish at the 2013 World Championships in Moscow, but rebounded by finishing fourth in London in 2014 and second in Berlin later that year, clocking a lifetime best of 2:20:27.

This weekend’s marathon will be her first race since her seventh-place finish at last year’s London marathon.

Less experienced than Tadese but almost as fast, fellow Ethiopian Amane Beriso will also be racing for the first time in 12 months. In Dubai last year the 25-year-old ran 2:20:48, the sixth-fastest marathon debut in history, but went on to finish a distant 13th in Boston three months later.

While Beriso lacks experience, compatriot Mulu Seboka has it in abundance. A former winner in Dubai, Toronto and Mumbai, this weekend’s race will be her 37th career marathon. She finished second in Prague back in 2009 and was victorious at the 2015 Karlovy Vary Half Marathon in 1:09:11.

Ethiopia’s Tadelech Bekele will be looking to make amends for the 2015 Prague Marathon, where she failed to finish. Earlier this year she placed fourth at the Dubai Marathon in 2:24:04, just 73 seconds shy of her PB.

The fifth Ethiopian in the field is Hirut Tibebu, who finished seventh in Prague last year on her marathon debut and took six minutes off her PB earlier this year in Dubai, clocking 2:25:12.

But Kenya’s Valary Aiyabei could spoil the potential all-Ethiopian party.

The 26-year-old has won her three most recent marathons, most recently clocking 2:24:48 to win in Valencia last November. Since then she has reduced her half-marathon PB to 1:07:50, finishing fourth in Prague in the race where Joyciline Jepkosgei broke the world record.

“Their battle will open up the chance for a race record of 2:22:34, achieved by Lydia Cheromei here in 2011,” organising committee president Carlo Capalbo said of the women’s race.

With four sub-2:07 runners on the start list, the men’s race in Prague also looks set to be a close one.

Compatriot Gebretsadik Adhana also set his PB several years ago, but the 2010 world U20 10,000m silver medallist has remained competitive and consistent since clocking 2:06:21 in 2012. He heads to Prague following a 2:08:55 victory at the Marrakech Marathon earlier this year.

But a Kenyan victory seems even more likely in the men’s race than it is the women’s.

Frankline Chepkwony clocked 2:06:51 at last year’s Seoul Marathon, just 40 seconds shy of the PB he set back in 2012. Fellow Kenyans Lani Rutto and Stephen Chemlany also have PBs faster than 2:07 and could challenge for a podium place on Sunday.

Popular Japanese runner and prolific racer Yuki Kawauchi is also entered and is aiming to improve his personal best of 2:08:14.

A total of 16,400 runners – 10,600 of whom will line up for the marathon – are expected to take part in this weekend’s activities in Prague. 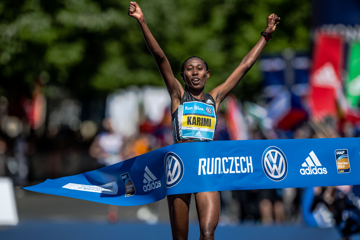