Provisional entries for the Buenos Aires 2018 Youth Olympic Games confirm that 179 nations will be represented among the 680 allocated places for athletics in the Argentinean capital from 11-16 October.

As with the previous two editions of the Games, there will be two stages to each of the 36 medal disciplines, but this year the format has changed so that the performances from both stages will be added together to determine the overall final placing.

In track events from 100m to 800m, including hurdles events, heats in stage one will be arranged using IAAF seeding rules. The results from the heats will determine the athletes' allocation to the stage two heats.

The top eight athletes from stage one will compete in the last heat in stage two. The remaining athletes will be spread equally over the other heats according to their times in stage one.

The 5000m race walk will have just one heat in each stage. The pit lane rule shall be used; after a third red card, athletes will serve a 30-second penalty. Any further red cards will result in a disqualification.

The 48 boys and 48 girls entered for the 1500m, 3000m and 2000m steeplechase will contest an individual heat of their specialist distance as the first stage of their competition. The second stage will be held as a 4km cross-country race – one race for boys and one race for girls – on the morning of 15 October.

The results of the cross-country race will be adjusted to reflect separate rankings for the 1500m, 3000m and 2000m steeplechase respectively with medals being allocated accordingly in the three individual track disciplines.

The mixed 8x100m relay, which was introduced in 2014, will also feature at this year's Games and will involve athletes from all track and field disciplines.

During the Games, an extensive culture and education programme will be organised for the athletes in which the IAAF encourages athletes to participate. The parks in Buenos Aires will also host a huge celebration to receive the thousands of spectators who will come out to see the best youth athletes in the world. 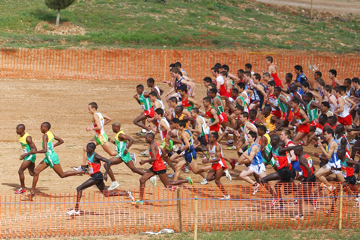