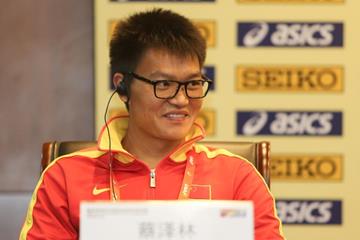 When Cai Zelin returns to the Chinese city of Taicang for the men’s 20km event at the IAAF World Race Walking Team Championships Taicang 2018 on Sunday (6), his goal is simple and clear: improve on his runner-up finishes from the previous two editions of this event and take his first individual victory in a global competition.

The 27-year-old is familiar with the completely flat and traffic-free two-kilometre loop course in the centre of Taicang, which has been used for the annual IAAF Race Walking Challenge event and for the 2014 IAAF World Race Walking Cup.

In fact, even Cai himself cannot remember clearly how many times he has competed in the eastern Chinese coastal city. But his most profound memory in Taicang is his second-place finish at the World Cup event four years ago. Cai went on to finish second behind teammate Wang Zhen in the same event in Rome two years later and he is looking to make it third time lucky on Sunday.

“I would like to say that Taicang is one of my lucky places,” Cai said at the pre-event press conference on Friday. “I took a silver medal here four year ago. It was the first medal in a senior race I won in major championships. Now I am more mature mentally and I hope I can make the final breakthrough this time.”

Since starting to compete internationally in 2010, the athlete from Yunnan Province has been bothered by a ‘runner-up jinx’. Apart from his back-to-back silver medals at this event, he also finished second at the 2010 World U20 Championships, the 2012 World Race Walking Challenge final, the 2014 Asian Games and the 2016 Olympic Games.

He made the decision to retire after the Olympics in Rio de Janeiro. But after nine months of rest without a single day of training, the thirst for an individual world title lured him back to the track.

“The process of coming back is very tough,” he recalled. “I needed to first overcome the weight problem and then try to get my form back. After three months of training, I competed in the National Games last September. But it was not a happy ending for me as I was disqualified with only two kilometres to go.”

Cai will be facing a new pit lane system in Taicang this time as the athletes who receive three red cards will not be disqualified directly, but instead forced to stay in a pit lane area for the relevant period of time (two minutes for the 20km race).

“This will not affect me much,” he said. “The pit lane can give the athletes with three cards an extra chance to finish the race, but still the time penalty will ruin your hope of a good result.”

Cai will be hoping for another good result in Taicang as it is where he has recorded the three fastest times of his career, all of them within 1:19.

“I trained hard with my coach in Italy this winter and have been striving to prepare for this race,” he added. “I am definitely in better shape than when I was in Huangshan (where he finished third in 1:20:38 at the National Race Walking Grand Prix).

“On Sunday, the biggest opponent for me is just myself.”