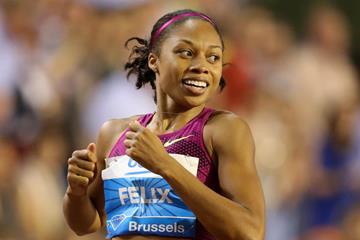 Felix rises from the ashes

When Allyson Felix crashed to the track in the 200m final at last year’s IAAF World Championships, some questioned whether it was the beginning of the end.

She was only 27 years old, but it was her 13th year of international competition in a career which goes back to the 2001 IAAF World Youth Championships, where she won gold in the 100m.

Felix is one of a rare breed of athlete who made a seamless transition from being a prodigiously talented teenager to a world-beating superstar athlete. And for more than a decade – during which she picked up eight world titles, including relays, and four Olympic gold medals – she had never had a serious injury.

That was, of course, until Moscow last year.

Her torn hamstring in the Russian capital meant that she would be entering uncharted territory during the winter as she set out on the long road back to full fitness.

But, just like her style on the track, her rehab appeared to go smoothly and she was back racing in May this year.

She opened her season with a 50.81 clocking over 400m at the IAAF Diamond League meeting in Shanghai. It was her slowest time over one lap of the track for three years, but that didn’t matter. The race was simply about getting back on track.

Felix then clocked 22.44 in her first 200m of the year, finishing third behind Tori Bowie’s break-through performance at the IAAF Diamond League meeting in Eugene with the former long jump specialist winning in a world-leading 22.18.

Felix’s first win of the season came less than two weeks later, triumphing in Oslo and then again in Ostrava one week later.

Dutch heptathlete Dafne Schippers then stunned the athletics world by winning the sprint double at the European Championships, clocking a world-leading 22.03 in the longer sprint.

That remained the world-leading mark until Felix bettered it by 0.01 at the IAAF Diamond League final in Brussels on Friday.

Finally, Felix was back to her old self again.

“It feels good to be back to my best,” she said after clocking her fastest time since winning the Olympic title in 2012. “It’s been a bumpy season, but I just had to stay patient throughout, which was tough to do, but I finally feel happy again.

“I wasn’t surprised by the time,” she added with a chuckle. “It has been a long time coming and Bobby [Kersee, her coach] kept telling me that we were focusing on the end of the season. As crazy as I feel like he is, he is right a lot of the time.”

Her time in the Belgian capital was comfortably faster than Shelly-Ann Fraser-Pryce’s winning time from last year’s World Championships.

There’s no telling, of course, what Felix may have been capable of doing in Moscow had she not torn her hamstring, but at the very least, she says, this season will put her in good stead for next year.

“You always go out there wanting to win and I went out there [in Moscow] thinking I could do something special,” she said. “But for me, this year was just about getting back and I feel I can really build off this for next year.

“I try not to read too much stuff, especially in a year like this,” she added. “I just like to take my own time, which can be hard as an athlete to do, because you just want to get out there and be at your best, but it was a different kind of year.”

It certainly has been an interesting year for the 200m. Specialist sprinters such as Felix and Fraser-Pryce were being beaten by former long jumpers such as Bowie and Blessing Okagbare. And then a heptathlete rocketed to the top of the world list.

But with Felix now back on top, normality, it seems, has been restored.

“It’s always good to feel good and be at your best,” she said. “It’s been good competition with a lot of people coming into the 200m this year, so it’s been fun.”

It helps that there was no major senior global outdoor championship this year, but the pressure will be back on in less than 12 months’ time as Beijing hosts the 2015 IAAF World Championships.

Out to win an unprecedented fourth world title over 200m, Felix will be up against the likes of defending champion Fraser-Pryce, Commonwealth champion Okagbare, European champion Schippers, double world silver medallist Murielle Ahoure and two-time Olympic champion Veronica Campbell-Brown in what could be one of the best races of the championships.

Never one to shy away from a challenge, Felix also doesn’t rule out having a tilt at the 400m in Beijing in an attempt to improve on her silver medal from the 2011 IAAF World Championships. And of course, she is also expected to be a valuable part of both the US relay teams.

Clearly, it will take more than a hamstring injury – and the challenge of non-specialists switching to the 200m – to stop Felix.