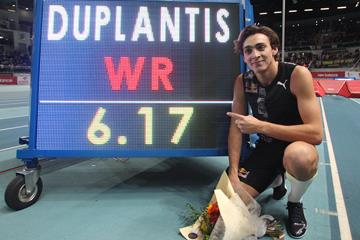 With world record behind him, the sky truly is the limit for Duplantis

Duplantis laughed as he shared it, a brief distraction as he struggled to come up with the words to describe precisely what it felt like to be the new pole vault world record holder. Less than an hour earlier he topped 6.17m on his second attempt, adding a centimetre to the mark Lavillenie set six years ago, almost to the day. Duplantis is usually quick with words, expressive, with a thoughtfulness suggesting a maturity beyond his 20 years. But at this moment, he’s hit a wall.

Then his thoughts circle back to Lavillenie.

“Growing up, Renaud was my absolute idol,” he said. “There is no other person I'd want to take (the record) from.” He then wonders aloud if what he just said has come across the way it was meant to.

“To succeed him,” he clarified. “The support he's given me through this whole process too, has been phenomenal.”

Then, he begins to gradually chip through that wall.

“How do you explain a dream that's been a dream since you were three years old? It's a big dream, too. It's not a little dream. And it's a whole process building up to that moment. I can't really get my head around it. Everything that has happened has built up to this. The little things, the big things. The bad things, the good things.”

Those all converged at the Orlen Copernicus Cup in Torun, Poland, on Saturday (8), the fourth stop of the World Athletics Indoor Tour, where Duplantis’s appearance was by far the most anticipated.

All things considered, the good have far outweighed the bad for Duplantis, the product of a sporting family - both parents were world class athletes, father Greg a pole vaulter and mother Helena a heptathlete - who began vaulting at four and was already setting age group records at seven. A multitude of high school honours followed during his secondary school years in the US. International honours - the 2015 world U18 title, 2018 world U20 title and 2018 European crown - for Sweden followed those. Last year, not yet 20, he took silver at the World Championships. By then we was already a 6.05m jumper. Only three men had ever soared higher. That he would one day succeed Lavillenie carried an air of inevitability.

That was made abundantly clear in Dusseldorf last Tuesday when he narrowly missed his first ever attempt at 6.17m by the narrowest of margins - in his first competition of the year.

After his performance in Dusseldorf, he said, “everyone expected me to break it, and wanted me to break it at the same time. I knew that it was something that, until I do it, I'm going to get asked about it. So I'm really glad I got it out of the way after that meet.”

There was no break in his momentum in Torun. Opening with an easy clearance at 5.52m, he went on with first attempt clearances at 5.72m, 5.92m and 6.01m. His first at 6.17m was solid, lifting his spirits even higher.

“I knew I had it me. I knew it was a possibility. In Dusseldorf I had a great attempt at it - but you never know when you'll be in that kind of shape again, in world record shape again.

“Tonight, after that first attempt, I thought, 'yeah, I just need two more attempts at this and I got it'. I was pretty confident that I had it."

He only needed one more. It wasn't clean - again he brushed it slightly on the way up - but the bar stayed on. When he landed, the stadium erupted; an infield celebration began; a mother-son hug followed. The record had fallen on just his sixth jump of the night.

He's visibly more fit than he was as recently as last October’s World Championships, a fitness that’s driven his strong early season form. The pole that propelled him to the record in Torun was the same one he used in Doha, but now he’s got much better control over it - instead of it over him.

‘I couldn't do much with it in Doha, because I was just a big fat college kid at the time, I guess. I'm a lot more in shape now so I can get a lot more out of the pole.”

He also credits a more professional approach this year.

Can he go higher? “Of course,” he says, and will be happy to make world record attempts a habit.

Further attempts are likely to come soon. He's got four more meets on his schedule this month: World Athletics Indoor Tour stops in Glasgow on the 15th and Lievin on the 19th and Clermont-Ferrand, France, hosted by Lavillenie, on the 23rd.