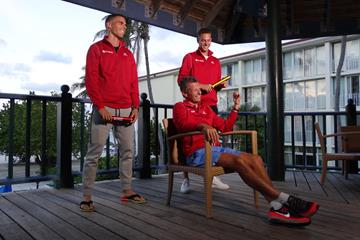 Borlees hoping to add to family medal collection in Nassau

“I stay very cool,” says Jacques Borlee, the creator of one of the great dynasties in athletics. “I know my sons, so when I watch them compete I know they’re able to control stress. I’m never nervous.”

Here in Nassau, ahead of the IAAF/BTC World Relays Bahamas 2017, the Belgian certainly appears in a relaxed mood, flanked by sons Kevin and Dylan, who speak with glowing pride about their father.

“I didn’t choose my dad but I chose my coach,” says Kevin, who has been guided to European 400m gold and world bronze by his father. “For me he’s one of the best. I know I’ll run fast because of that and that’s why I stick with him. In four or five years when I’m done, he’ll still be my dad, but right now he’s my coach and that’s how I think of him.”

To say success runs in the family is an understatement: Kevin’s twin brother, Jonathan, is a two-time world finalist over 400m, an Olympic finalist, and together they have been the driving force behind the Belgians 4x400m success in recent years.

The path was paved, of course, by older sister Olivia, who was part of the Belgian women’s 4x100m team which won Olympic gold in 2008. Younger brother Dylan, 24, has been a more recent addition to the family’s success, helping the 4x400m team to fourth in the Olympics last year, where, along with Julien Watrin, the brothers clocked a national record of 2:58.52

“There’s pride because we set a Belgian record and fourth is still a great achievement, but we are competitors and we want to win medals,” says Dylan. “There will always be a little bit of disappointment but we hope to erase that in Tokyo in three years.”

The journey there starts tonight, with the Belgians getting their 2017 season under way in Nassau, where they finished third behind the US and Bahamas two years ago.

“It’s an amazing event,” says Kevin. “IAAF did a really good job bringing the championships here because it’s early in the season, not a lot of athletes have raced, but with the Bahamian crowd the atmosphere is amazing so every athlete wants to run. It’s fun – a good way to start.”

Unfortunately they will be without Jonathan this year after the 29-year-old tweaked a hamstring earlier this week at their training camp in Florida, but the mood in their camp is nonetheless buoyant for the season ahead.

“I think our team is capable of running faster,” says Kevin. “Rio wasn’t the best race – Jonathan, Dylan and I were not in our best shape. If everything goes well this year and we can train and compete at our best, we can run faster than 2:58. What we want is the medal. If we run a national record it’s good, but I’d always rather have a medal.”

Kevin admits the absence of his twin brother will be a blow, not just because of his speed, but the team spirit that’s harnessed when they toe the line together.

“When we race as individuals it’s not running against him, it’s running with each other,” he says. “If we’re in a semi-final, I’m running against six others, not seven. It’s strength for us, to run together, to handle the stress together and share the same passion for the race.”

As did Jacques, a European indoor 200m silver medallist in 1983, who is known for a novel approach to building physical and mental strength in the off-season. Ahead of the 2012 season, he took the squad to Iceland for five days of trekking in isolated conditions. Ahead of the 2016 season he took them to the opposite extreme – the Grand Canyon in the US – for a week of cycling, running and climbing in the desert heat.

“For fighting spirit it’s very, very important,” says Jacques, who is always the last person to offer his counsel before the team competes. “It’s important to use good words before the race. With my sons sometimes it’s not easy, but I give them the fighting spirit.”

So far this year, there have been no further wild adventures, just a six-week training camp in Australia followed by a period of warm-weather training in Florida, which the brothers hope will set them up for something special in 2017, if not this weekend then certainly at the IAAF World Championships in London.

And there every step of the way, cool as ever, will be the man who made it all possible.