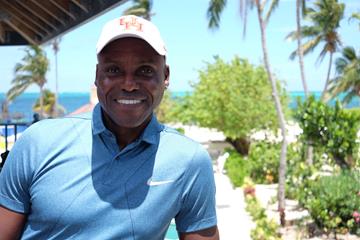 Three times he has anchored his nation to victory at the IAAF World Championships, and twice he has carried them to 4x100m gold at the Olympic Games – the first of those, in Los Angeles in 1984, while dealing with as much pressure as any athlete in history.

As a result, when Carl Lewis talks about relays, it’s probably a good idea to listen.

The American is in Nassau this week for the IAAF/BTC World Relays Bahamas 2017, and with two days to go the excitement is building, even for a nine-time Olympic champion.

“I think this event is a great idea,” says Lewis, who is attending for the first time. “It’s good for fans because people love the relays.”

Lewis coaches both at his base in Texas, where he is full-time assistant coach at the University of Houston, but regardless of his vested interest, he remains desperate to see the United States return to the top of the pecking order this weekend.

In several global events in recent years, the US men’s 4x100m team has fallen victim to botched exchanges and disqualifications, but Lewis is optimistic a change is coming. He attended the first group training session under their new relays coach Orin Richburg recently and liked what he saw.

“It’s been an individualised programme for a long time and now it’s a team approach. When you put the colours on as a relay member you’re supposed to put the team first.”

He believes Richburg is the right man to lead the US back to the top step of the podium, a place their men’s 4x100m team has not reached in an Olympic or IAAF World Championships since 2007, when they defeated Jamaica in Osaka. Lewis believes the current relay system is more akin to what the US team was doing during his prime.

“That’s why we never dropped the stick because the system back then was to hire a college coach who works with kids all the time,” he says. “If you have a good system it doesn’t take a lot of practice; you just have to teach people what to do correctly and expect them to get better. It’s not rocket science.”

But what does Lewis believe is the essential component of a good sprint relay?

“The key is simplicity,” he says. “People take something that’s very easy and make it difficult. The key for any sprint relay is to take as many things off the table that a person has to worry about. It’s great to have a coach now who understands a successful system, so that’s exciting for me to see.

“The system we use in Houston that Coach Orin understands is: it’s about the baton, it’s not about the runner. If you realise the objective is to keep the baton moving as fast as possible around the track, then you take the athlete and put them in a position to get the baton around.

As da Vinci once said, simplicity is the ultimate sophistication. On Saturday night in Nassau, Lewis will be watching with a keen eye, hoping to see that his countrymen have finally mastered the art.