‘Champs’ – the biggest deal in Jamaica

Tyreke Wilson, winner of the class-3 100m at the Boys and Girls Championships in Jamaica (© Jean-Pierre Durand)

What exactly is the Boys and Girls Championships? The only way to properly answer this question is to actually go to Kingston, Jamaica, at the end of March and witness the event that is affectionately and simply known as ‘Champs’.

The biggest and the most popular athletics competition in Jamaica, ‘Champs’ is a nationwide team competition among high school teams, consisting of athletes aged 10 to 19. But it’s more than that. Most importantly, it’s five days of a general excitement.

Front pages of the biggest newspapers, five days of live broadcast on national TV, and full stands of the 35,000-seat National Stadium in Kingston. Every single person in the country seems to have a favourite team to support with passion. Current Jamaican stars are no exception, especially given that they all had gone through this event.

It is no surprise to see the world and Olympic Champion Shelly-Ann Fraser-Pryce dressed in her high school colours, maroon and gold, standing on the chair and loudly cheering for young athletes.

“A lot of people will say, ‘What is this grown-up woman doing there screaming and making noise?’ But when I go to Champs, I’m not going to just sit in the seat. When I leave the stadium at night, I can hardly hear myself, because I’ve been screaming. And I’m one of those people who gets their nails done in my school’s colours. It’s all about Wolmer’s boys and girls this week,” says the ‘Pocket Rocket’.

Fraser-Pryce also admits that the Champs experience also made it easier to deal with the pressure of major competition further on in her career. “When I came out of the tunnel on the track, I was like, ‘Oh my God!’. I remember being so little, and I made the final of the 100m. I came in seventh, but I was proud, because so many people come there and they don’t make the final,” she explains.

“Being at the Olympics later on, I knew that I’ve already seen that kind of a crowd before and experienced that adrenaline. As professional athletes, we need adrenaline, but not too much of it.”

World and Olympic 200m medallist Warren Weir was the captain of the Calabar High School Team. And he still is, in some sense. He spends his every free minute with the team and each year gives the boys a motivational speech before the competition.

“I will definitely be at the stadium,” he said. “This week it’s all about Calabar, all about green and black. It’s a wonderful feeling to be able to talk to the young athletes, to see them looking up to you as someone who had the same experience.”

The sprinter knows what makes Champs so special. “It’s probably the most competitive junior championships in the world. And it’s more about teams, about getting the most points to make your school the champion.”

Yohan Blake, the 2011 world 100m champion who had his two Champs records broken this year, is proud to be St Jago High School alumnus. “If you look at the world and Olympic champions, you will see a lot of St Jago athletes there because we know how to preserve our athletes for a career after high school.”

The history of Champs goes back to 1910, but the event has massively grown in popularity since 1999, when the boys’ and girls’ competitions were merged.

“It’s night and day!” says 1976 Olympic 200m champion Don Quarrie, who also competed at Champs as a youngster. “Now it’s more competitive and there’s no dominant school. Before, only top schools would get major support; now you have so many outstanding athletes from different schools that a number of teams have their fans. It’s noisy, you can tell, but it’s fun. Maybe we will even need a new, bigger stadium.”

“The Champs are very important for us in Jamaica, and very important on the world level, as well, because they produce top junior athletes,” says Grace Jackson, 1988 Olympic 200m silver medallist. This depth at the junior level often later translates to a high level of competition for berths on the national team and helps to grow the popularity of athletics in the country.

“The more athletes you have to choose from, the better trials you have,” adds Jackson. “When you have eight men and anyone can make it, you’ll have fantastic times. And you have a crowd in the stadium, because nobody knows who’s going to make the team.”

Being held early in the season, Champs provides a first glimpse as to who might be making the headlines at the major age-group events in the summer. Last year, Jamaica dominated the medals table at the IAAF World Youth Championships in Donetsk. In 2014 the highlight of the season for young athletes is the IAAF World Junior Championships, held on 22-27 July in Eugene, USA.

And when Jamaican athletes win medals in Eugene, as no doubt they will, remember where you heard about them first. 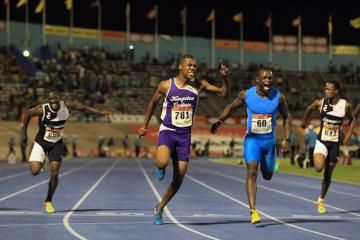