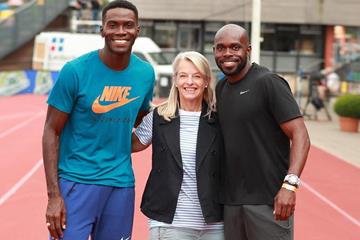 Caroline Feith is a people person.

Throughout her 20-year career as a manager, an athlete’s personality – not their performances or age or nationality – has been the most important factor when deciding whether to work with someone.

“I need to click with an athlete,” she says. “It's hard to explain, but you get a feeling.”

It’s that same feeling, her natural instinct, which led her to becoming a manager in the first place.

Her father, Antoine, was the chairman of the Dutch Olympic Committee and Feith would often join him at all manner of sporting events from a young age. “My passion for sports definitely came from my father,” she says. “Unfortunately he passed away quite young, before I started working in sports, but I think he knows,” she adds, looking skyward.

It was while working at Nike in the Netherlands that Feith met Jos Hermens. Hermens later left to set up an athletics management company and Feith started working for him a few years later.

Then in 2000, having left Hermens' company, Feith received a phone call from US sprinter Brian Lewis. “He asked me to be his manager,” recalls Feith. “At first I told him no and explained I was no longer working in that field. But he called me again and again to ask, so eventually I said, 'okay, I'll do it for you'. And that's how it began.

“I started my own company, Pro Sports International, and Brian was my first athlete. Before I knew it, I had a big group of American athletes, then the Brits came, then it all took off. I never really had a plan to try to recruit athletes, it just happened.

“Sometimes I can be a bit impulsive,” she adds. “Once I'd decided I was going to set up my own company, I just resigned from my job at the time and went for it. If I was in that position now, I don't know if I'd be quite so impulsive. It was quite a big risk.”

Despite the risks, Feith’s career change proved to be a good one. She soon found, however, that there are pros and cons to being a woman in a male-dominated industry.

“I know some athletes choose to work with me because I'm a woman and they believe women are better organised and so would be a better choice for them,” she says.

“But one athlete told me that some male managers told him, 'Don't sign with Caroline because she's a woman and this is a man's world'. The athlete was shocked by this and thought, 'they're probably only saying this because she's a better agent, so maybe I will sign with her'. And he did – so perhaps it was actually a good thing that this happened.

“I guess there are advantages and disadvantages to being a woman in this industry,” she adds. “And maybe there are some men around who still think it’s a man’s world. But you know what? I can't be bothered. I just move on and do my thing.”

Tricks of the trade

Over the past 20 years, Feith has managed some of the biggest names in the sport. World champions, Olympic gold medallists and world record-holders have all featured in the Pro Sports International family.

Feith’s non-discriminatory approach to management has been key to forging lasting working relationships – and friendships – with athletes.

“Some managers are reluctant to work with older athletes,” she explains. “In this sport, if you're past 30 then some people will push you to the side and think you're told old. But I never look at ages; for me, it's what an athlete is doing at that point.

“I worked with Kim Collins (2003 world 100m champion) for almost his whole career and he set his PB (9.93) when he was 40. How can you tell someone like him that you're too old? Age doesn't mean anything to me.

Today in Berlin, last race for @runkim100m. A long and amazing career. I feel blessed I have been part of it. I will miss you Kim. ❤

“It's the same with women who become mothers. Look at Nia Ali, I bet a lot of people told her that she'd never come back after having two children, but she proved them wrong.”

The other secret to Feith’s success has been her willingness to adapt.

“Things change in every industry, ours included,” she says. “There are many more managers around now. The whole structure of our sport has also changed. You just have to go with the flow and be prepared to adapt, always looking to the future.

“Every year there are challenges that you have to overcome with your group of athletes. The World Indoors being postponed is just one recent example. But it's okay – it happens and you just move along.”

Despite the regular challenges, Feith says she wouldn’t change her job for the world.

“I still enjoy it as much as I ever have done,” says Feith. “Sometimes I get a bit homesick from being on the road all the time, but I've been doing this for so long now, it comes natural. Sometimes you really look forward to being home, but then once you get there, you start to think, 'when's my next trip?!'”

For anyone considering a career move similar to the one Feith made 20 years ago, her main advice is to simply be aware of all the risks involved.

“It's not always an easy industry, so people need to be aware of what they're stepping into,” she says. “There’s far more security working nine-to-five for a big company. Working for yourself as a manager in sport, there's not much security and you might not know what comes next, so you need to be able to handle that. The same applies to athletes – they might have a great season one year, then be injured the next.

“But I would say to anybody: don't hold back on yourself,” says Feith. “Just go for it and see what you can do.”