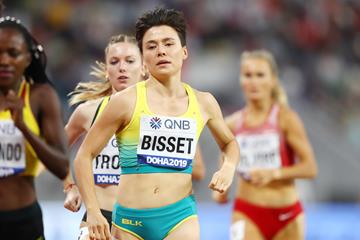 Winning her battles off the track, Bisset’s rise continues on the track

Yes, the Australian 800m record-holder has fought a publicly acknowledged battle with depression, anxiety and an eating disorder. And, yes, today she is in a much healthier place thanks to her loving and strong support network, but it would be remiss to simplify Bisset’s life journey.

That is not how the engaging and articulate 25-year-old would want it. Her story is not black or white, it is in shades of grey and it is all the better for that.

“I’m in a really good, healthy place,” explains Bisset, who last July smashed Charlene Rendina’s 43-year-old Australian 800m record with a 1:58.78 performance at the London Diamond League. “But this is not a simple tale of overcoming adversity. I’ve spent years learning to be mentally resilient, building a strong network of friends and support team around me. And it was going through this process that allowed me to reach the places I have.”

Raised in the Australian capital city of Canberra to an Australian father and Chinese mother, who was born in Nanjing, venue for the 2021 World Athletics Indoor Championships, athletics was an important part of her life since joining her local athletics club at the age of six.

Keen on many sports, Catriona enjoyed swimming, touch football and netball but loved athletics. Initially she focused on the sprints and, more particularly, the 400m.

At the age of 12 she finished fourth in the U14 400m final at the Australian Championships, but her budding dream of a promising competitive athletics career was soon to be put on a decade-long hold.

“From the age of 12 or 13 my athletics did not go very well,” she recalls of this dark period of her life. “I had a navicular bone issue but I was also not dealing well with being a young, adolescent girl in sport. I compared myself with other athletes but didn’t understand that everyone’s body changes at different rates. I lacked self-awareness. I was too young to understand my emotions.”

Athletics to the backburner

For the next decade, but for occasional appearances in school competitions, athletics took a back seat. She focused on her academics and toiled with her various issues, largely in silence.

After graduating from school she left home at the age of 17 to start a Bachelor of Architectural Studies at the University of New South Wales in Sydney. However, the switch only served to worsen her mental well-being.

“All the years where I didn’t address my issues left me with a low opinion of myself and those early days at university were probably the worst time,” she recalls. “I had moved out of home, I was away from my support network and by the end of my first year at university I became suicidal. I realised I had to do something about it. I went back to Canberra and I started seeing a psychologist and taking medication.”

The past seven years has not been a “smooth trajectory” for the amiable Australian middle-distance runner and to this day she still faces mental health challenges.

However, over time her life became more balanced and she slowly re-engaged with running. While studying in Sydney she dipped in and out of training sessions under the coaching of Dean Gleeson and decided to fully commit in 2016 after witnessing firsthand the euphoria felt by a training partner who has claimed multiple PBs that season.

A new coach, a renewed commitment

“At that moment I saw how intoxicating athletics can be,” she says. “It was at that moment my mind flipped and I thought, yes, I’m going to do this properly again.”

Later that year she ran a PB of 2:11.85 in Sydney but it was in early 2017 after moving to Melbourne to start a postgraduate degree in Architecture and connecting with a new coach, Peter Fortune, which was to act as the catalyst for her rise on to the world stage.

Thrust into a training group known as the Wolfpack, overseen by three coaches including Fortune, the man who guided Cathy Freeman to the 400m gold medal at the 2000 Sydney Olympics, she has thrived in a quality training environment which includes Australian 1500m and mile record-holder Linden Hall.

“You would never expect Fort to be a world-class coach because he is such an adorable grandpa figure,” she explains. “When I first joined the group I was by no means an elite athlete, but he allows such room for growth. He has no expectations just that you are lovely and get on with everyone in the group. He will give as much back to you as you do for him."

In 2018, Bisset started to reap the benefits as her PB plummeted by six seconds to 2:03.48 across the course of the season.

“In some ways running 2:03 was bigger for me than the 1:58 (Australian record),” she explains. “It made me believe I had the potential to make future Australian teams. It gave me huge motivation.”

Her 2019 domestic season ran like a charm. She set five 800m PBs including a 2:00.48 clocking in Sydney to be crowned Australian champion.

Then at the Australian University Championships, she stopped the clock in a stunning 1:59.78 to smash through the two-minute barrier for the first time.

“That run was when it all hit me,” she says. “I had a total meltdown. To run a solo 1:59 almost out of nowhere was a pretty overwhelming feeling.”

She moved on to Europe to compete at the World University Games in Naples, and struck gold in blisteringly hot temperatures.

In the form of her life, Bisset continued competing in Europe and earned an invite into the London Diamond League. Confident of a good showing she settled quickly into the race and passed the bell in third in a time of around 57.5.

With 200 metres remaining and “chomping at the bit” she kicked on chasing race winner Lynsey Sharp of Great Britain to take second spot in 1:58.78 and breaking the national record.

“As soon as I saw Lynsey’s time of 1:58 – I knew I’d broken the Australian record,” she recalls. “It was not something I’d targeted but I knew it was just a matter of time because my training sessions had been going ridiculously well.

“I feel very grateful for that race and what it has done for my confidence,” she explains. “I feel it has changed the way I think about myself, it is like I belong, and deserve to be here.”

Shortly after the euphoria of London, Bisset’s season, however, was to take a cruel twist as just eight weeks out from the World Athletics Championships in Doha she was diagnosed with a stress reaction in her ankle.

Largely restricted to cross training and limited speedwork in the countdown to Doha she arrived in Qatar “mentally and physically exhausted.” Describing this period as “horrible” and, understandably, short of fitness she trailed home a distant sixth in her heat in 2:05.33.

Finally returning to full training in early January, Bisset has enjoyed a good start to the season Down Under both in Canberra (2:02.41) and winning at a windy Auckland (2:04.45). The Australian Championships looms later in March in Sydney as a target, beyond that she hopes to spend a stint training at altitude in Flagstaff, before embarking on a European campaign ahead of what she hopes will be an appearance at the Tokyo Olympic Games.

There is little doubt the timing of her injury last year was a huge blow but she has re-emerged with a positive mindset.

“I know having gone through that experience will make me better prepared for Tokyo,” she adds. “I feel grateful to be healthy. I’ve never felt so confident going into a new season. I look at the indoor results and when I see people running 1:57 or 1:58, I take it as a challenge. If they can do it, why can’t I?

“My ambition for this season is to be consistent and do things with conviction.”

Mentally in “a good place” at the moment she is honest enough to admit, however, her mental state can “change quickly” and predictions of the future are hard to make.

With only her life experiences to draw upon she is reticent to offer too much advice to others going through their own personal battles, but she does have some general thoughts.

“I would encourage people to share their experiences,” she says. “Start somewhere small, talk to a friend or anonymously call a support service. The more we normalise these conversations and people like me can be publicly vulnerable then hopefully more people can also be privately vulnerable too.”