Samuels' trajectory now back on course and set for Marrakech

Discus throwers like Australia’s 2009 world champion Dani Samuels are always seeking the perfect trajectory but fans of athletics are sometimes guilty of having the same expectation for the career of an international athlete.

The trajectory of a successful career might lead from club level to regional to national to continental to global level and – for the very best – to the Olympic Games and IAAF World Championships.

Gradually building; gradually getting better. But sport isn’t always like that and Samuels' climb through the ranks was sharper than most.

She won gold the 2005 IAAF World Youth Championships in Marrakech – a city she will revisit next month as she will compete in the IAAF Continental Cup – added world junior gold in Beijing the following year and then, just three years later, she won gold at the World Championships in Berlin.

It completed an incredible global hat-trick, one which has only been achieved by a handful of the sport’s stars, and a remarkable ascent to the sport’s pinnacle. With a personal best of 65.44m she became the youngest ever female world champion in the event at 21 in the German capital.

Samuels recalls the moment fondly. “It was fantastic to win at that time. My coach (Denis Knowles, whom she has worked with from the age of eight) and I knew I was ready to do that from training.

“I went in there ranked 29th, so there wasn’t anyone outside our little circle who knew how well I was throwing. I’d never say it was too early. At the 2008 Olympics, I look back on that and I had a monster foul just outside the sector. I missed that final by just 20cm. What I have learned over this time is that whether you are young or whether you are old, it shouldn’t limit your performance."

However, with her new-found status, came expectation and it was something the young Australian struggled with in 2010, especially at the end of a long European summer season when she finished fourth at both the IAAF Diamond League final in Brussels and then the inaugural IAAF Continental Cup.

“It was all a new experience for me,” she admitted. “I was 22 years old as the world champion. I think my coach worked out I travelled 100,000 kilometres for eight competitions that year.

“I think putting pressure on myself for those World Championships, I just tensed up and got really nervous. I made it to the final, but not the top eight. That was really disappointing. But I remember feeling mostly relief more than anything after Daegu.

“It’s been a similar story in 2012 and 2013. I’ve been able to make it to the finals of the World Championships and Olympics, but I was putting too much pressure on myself and not making it to the next cut. It shows how much confidence and belief in yourself play a part in it.”

But this year, the belief has returned and Samuels’ career has taken another upward trajectory.

She has improved her personal best to 67.99m and currently lies third on the world lists to Croatia’s Sandra Perkovic and USA's Gia Lewis-Smallwood.

Crucially, she has also proved she can perform again in the championship arena, winning Commonwealth Games gold with a solid 64.88m in Glasgow last month.

“It’s been a good five years since I’ve been on top of the podium," she said. "It was a fantastic feeling having the medal put around me and having the anthem played on my behalf. It was really special. With my Commonwealth Games experiences myself, I came third in Melbourne in 2006 and I didn’t go to Delhi in 2010. So it was really important for me to win this and I really wanted it."

Hungry for more success, Samuels is now looking to end her resurgent season with a flourish at the IAAF Continental Cup on 13-14 September in Marrakech, the scene of her breakthrough world youth title.

“The main focus for me this year was the Commonwealth Games, but a close second is the Continental Cup and competing well at the Diamond League," said the Sydney-born athlete. "A decent consistent performance. I’ve said at least 64 metres for all competitions this year, but it will be nice to go a bit better, maybe 65 or 66 metres. It’ll be nice and hot, that’s for sure.”

Furthermore, she is excited rather than intimidated by the next few years.

“The whole standard of discus has been dragged up in the last couple of years. I threw 67.89m and came second in a Diamond League this year (Shanghai). The standard has gone up and it is making it more competitive, people are throwing further on a regular basis.

“It’s crazy that it’s now only two years to go to the next Olympics. It’s just a case of getting a bit faster, a bit stronger, more technically sound and efficient. I’ll have to get into 70-metre shape to have a look in for the gold medal in Rio.

“The plan was to get to 68 this year, 69 next year and hopefully 70 by the time Rio comes round. I’ll be 28 then, all the signs from other discus throwers points to 28 to 32 when you start hitting your best.”

For Samuels, her latest trajectory looks right on course. 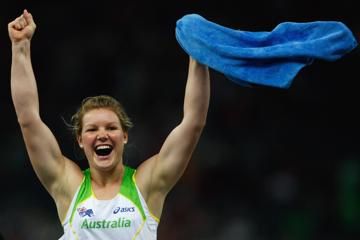 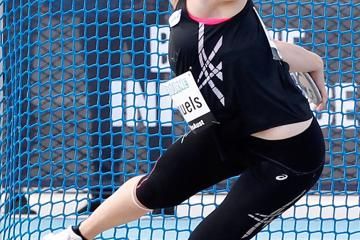 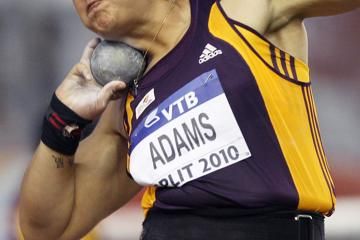