Surprise winner in 2015, Williams returns as the favourite in Doha

Overcoming the odds has been one of the strongest traits of 2015 world champion Danielle Williams of Jamaica. The 27-year-old, who will be competing in her fourth IAAF World Championships in Doha, recalls her journey leading up to her triumph in Beijing.

“It was a special time for me because it was my first year being a professional,” said Williams, who did not feature among the 20 fastest hurdlers at the time. “I did not get to race a lot against the elite hurdlers all year and I probably had three competitions going into the world championships.”

The thought of medalling was the furthest thing from Williams’ mind going into the championships, as she would have been satisfied just being a finalist. “I knew I had what it took to make the final and was prepared to run a personal best to get there. Once I got to the final, my aim was just to compete as best as I could. If I had finished last in the race, I would have been satisfied,” she reasoned.

Williams, who won the World University Games title a month earlier, admitted that she struggled to come to grips at first with what she had achieved but was happy she overcame many barriers, pun intended, which proved anything was possible.

“I don’t think I was the best person in the field, I was just the best person after three rounds and so I came out victorious. I was elated and I don’t usually get excited but to know that moment proved I did belong and vindication that a division two athlete, which is a rare sight, could come out and take on the best in the world in their first year out of college and win was a happy feeling.”

She became the second Jamaican woman behind Brigitte Foster-Hylton, the 2009 winner, to be crowned world champion in the 100m hurdles.

This indomitable spirit was cultivated from the time she was a teenager competing for the Queen’s School at the annual Inter-secondary Schools Sports Association Boys and Girls Championships (Champs) in Kingston, Jamaica. “I credit champs a lot for building my character, because it is not the easiest environment to perform. It definitely helped build my confidence to perform under pressure,” Williams said. “If you are able to thrive under that level of stress, in that atmosphere, then there is no other stadium in the world that you should go to and be afraid to compete.”

Danielle and Shermaine Williams after the 100m hurdles final at the IAAF World Championships, Beijing 2015

The world number one ranked hurdler revealed that she came upon the discipline by chance in her first year at high school and never looked back. “In my first year, the coach arranged some sticks and instructed us to jump over them and I was doing pretty well and so I continued at it. I liked the challenge because not many persons were doing the hurdles at the time and I decided to take it on and I fell in love with it.”

After a successful athletics journey in high school, Williams moved overseas to take up an offer at Johnson C. Smith University in North Carolina. She admitted going to the institution because her long-time coach Lennox Graham was working there. Williams believes the experience at the university was a great one and she has no regrets choosing that path.

“It was fun and definitely different from high school athletics,” stated Williams. “There was no pressure for me to run fast every week which is something that I liked as compared to the division one track meets where every week you have to be on your game. At Johnson C. Smith, I could take things slow and run fast when it was necessary and that was what I really love about my college experience.”

She describes herself as an introvert who does not crave the limelight, but would rather spend time with her close-knit group of friends who keep her grounded and give her maximum support.

Despite her 2015 success, Williams missed the Rio Olympic Games the following year, a setback that briefly haunted her.

“It was pretty frustrating for me as it was my first Olympic trials and coming off the momentum of winning worlds the year before, I was ready to launch my career to the next level. I was in good shape but mentally I was not where I needed to be as I had a lot of outside things going on and it reflected in my performance as I fell at the trials.”

Williams believe that every year there is a lesson specifically geared towards her and in that particular moment of anguish she vowed to approach her task differently going forward. “Nothing else matters other than the ten hurdles and once I’m fit and ready to go there is hardly any outside interference that is really important.”

Her mental fortitude endured a major roadblock at the Jamaican National Championships where she was penalised with a false start and subsequently faced ineligibility to the World Championships. Though the news came as a hiccup along her journey, it did not faze the tenacious Williams who duly focused on winning the Diamond League Trophy that she and her coach Lennox Graham had set as one of their objectives this season.

“At the start of the season we knew that the World Championships was going to be late September to early October and so having competed on the circuit last year with relative success, we decided we were going to build on that this season,” explained Williams.

With Doha firmly in her crosshairs, Williams hopes her experience from previous editions will work to her advantage.

“My first world championships I was a bit star struck just looking around and saying, ‘Oh my gosh I’m here’. I am relaxed going into this one and I know what I am here to do and what I need to do. Hopefully, I can go out and execute the way I want to and get the best result.”

Competition in the women’s 100m hurdles begins with heats on Saturday (5) and continue with the semi-finals and final on Sunday (6).

BACK
Pages related to this articleAthletes
Danielle WILLIAMS 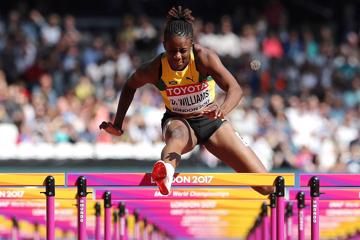