Of all the shocks at the recent IAAF World Championships in Beijing, the sight of Dawn Harper Nelson crashing out of the 100m hurdles semi-finals was among the most surprising.

Harper Nelson never falls. It is almost an unwritten rule of the event. So too is her consistency and her ability to raise her game when it matters most.

Yet there she was, in one of the biggest competitions of her life, sitting on the ground with her limbs wrapped around a hurdle.

A rare DNF for DHN.

“Bobby (Kersee, her coach) and I have been working on the beginning of my race a lot this year,” she said. “I was executing it very well in the warm up. But when I execute my race well, the first and the second hurdles come in my face really fast and I have to think of what I need to do to not get caught up in the race.

“In the warm up I was thinking of my trail leg a lot, but in the race I don’t think I was zoned in completely on my trail leg. And combined with the fast track, it was just a perfect storm,” she added. “After I cleared the first hurdle, I thought, ‘okay, we’re racing.’ But really, for me, I can’t really race until after hurdle three. And that’s what it was.”

Looking back, she describes it as the biggest blow of her racing career, both mentally and physically.

“When I got back up, I didn’t realise how bad I hurt myself,” she said. “The skin on the front of my knee was completely gone. It was bad. I couldn’t put my knee down on the track, I couldn’t shower, no ice baths; it was hard. For my next couple of practises I was only able to do a three-point stance.”

The mental scars were just as painful.

“If you’ve worked really hard for this one day, then you can’t just easily dismiss something like that,” she said. “The next day I didn’t get out of bed. And I felt bad because it was my husband’s birthday. He was just saying, ‘whatever you need,’ and I’m like, ‘I’m so sorry!’ I was just still in so much shock.

“I gave myself a day or two and then told myself that I have to learn from this, but you still have meets to go and your season’s not over so you can’t wallow in it too long. I knew I was mentally strong and I knew I would bounce back.”

Off the back of such disappointment, it would be easy to be dismissive of the outcome of a race that was missing some of the event’s fastest athletes in recent years. But Harper Nelson was gracious in defeat.

“I don’t know why, but I had to watch the final,” she said. “I know some of the other hurdlers who missed out on the final were saying it was so hard to watch, and my husband was saying, ‘are you seriously about to watch this?!’ But I couldn’t get my eyes off the TV.

“When I saw it play out, it really came down to who ran a clean race,” she added. “Those girls put together their race and it really was a magical moment for them. When someone works hard for something and it comes true, all you can do is applaud. It was exciting, for sure.

“I pride myself on being mentally tough and physically ready when the big meets come and I find a way to get it done. So when the fall happened, I was like, ‘Oh my God, who ran that race?!’ But we’re all human. And true consistency is about getting back up and not letting that one race defeat you.”

It wasn’t long before Harper Nelson was back on track and back to winning again. Her first race after Beijing was at the IAAF World Challenge meeting in Berlin, which she won in 12.82. Five days later – and exactly two weeks to the day of her fateful race in Beijing – she won at the IAAF Diamond League final in Brussels, securing her fourth consecutive Diamond Race title in the process and celebrating with her trademark cartwheel.

Once again, Harper Nelson – in her own words – ‘got it done’.

“Sometimes you have to be brutally honest with yourself to understand what you’re stepping into, and that’s what I told myself,” she said. “As I was on the line, I said to myself, ‘stop making it bigger than what it is; you’ve been here before. But you need to pull it off’.

“This is the fourth time in a row that I’ve won, and I’ve been blessed that the last two times it came down to who was going to win the final,” she added. “This time there were three of us. It was so intense! For the fans it was amazing.”

Having wrapped up her 2015 season, Harper Nelson already has one eye on 2016 and winning another Olympic gold medal in Rio.

“Sometimes that’s a crutch of mine; I start to think of next year right now, straight after my last race of the season,” she said. “My coach told me today at the track to finish this season with a win so I can relax my mind, because once we start again, it will be full force for Rio. I’ll try to give myself a break, but I’m already jotting stuff down for next year.

“That’s just what you do when you want it to go well, and I’ll definitely use my experience in Beijing as motivation for next year,” added Harper Nelson, who – like the rest of her training group – doesn’t intend on competing indoors next year. “Rio could be my third Olympics. Gold would be so amazing. It would be a great story.”

Should Harper Nelson win in Rio next year, she would become the first woman in history to regain an Olympic title in the 100m hurdles. But first she would need to make the team, of course, and despite competing at six successive global championships and taking medals in three of those, the 31-year-old isn’t taking anything for granted.

“In the US, whoever makes the team has earned their spot,” she said.

She also feels capable of bettering her lifetime best of 12.37, set when taking silver at the 2012 Olympics.

“I was ready to set a PB in Beijing,” she said. “But it’s still a tiny bit of comfort to know that I was ready to run fast and that, if I stay healthy, I can build on it for next year. 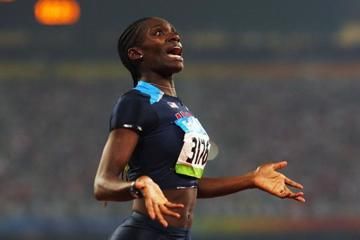 Harper no longer an unknown in 100m Hurdles... 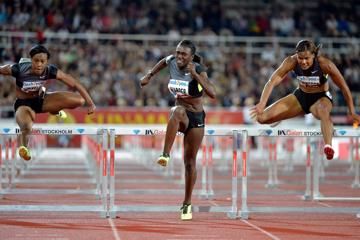 Dawn of a new era for Harper Nelson... 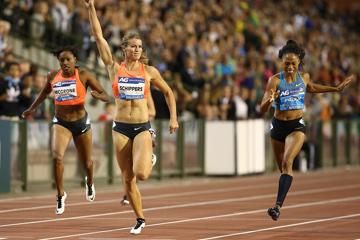