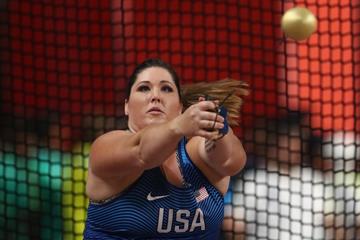 Deanna Price’s hammer career almost ended before it even got going.

At the age of 16, the assistant track and field coach at Price’s high school handed her a hammer for the first time. She swung it around her head and, not really knowing what to do, ended up whacking the handle off her forehead.

“I remember literally dropping it and saying, 'I'm never doing this again',” recalls Price. “I was done.”

Fortunately, she stuck at it. Ten years on from that incident, Price is now the world hammer champion, the North American record-holder and the fourth-best thrower of all time.

Price’s victory in Doha was one of the most enduring moments of the World Championships. Second in the starting order, her opening mark of 76.87m would have sufficed for gold, but she improved to 77.54m in the third round to consolidate her lead. After taking her sixth and final throw, the gold medal already secured, she dropped to the ground, completely overcome with emotion, tears streaming down her face.

“At that moment, knowing that the season was done and I'm coming away as a world champion, they were more thankful tears for the support that I get from so many different people and to compete against such great individuals,” she says.

“My throw felt really good. I didn't think it was that far, but it went, so that was a good thing. There’s more to come, so I’m looking forward to it.”

“Being able to bring that medal home for my country, the USA’s first ever medal in the women’s hammer throw, it meant everything,” she said. “It’s crazy.”

From softball to a metal ball

“I held the homerun record for Missouri, I think it was 14 or 15 home runs in one season and a batting average of 505,” she says. “I had full-ride opportunities for softball and I was just doing track and field to stay in shape. I only weighed about 145 pounds during my freshman year in high school and I was actually going to run the 800m. I wanted to break my mother's record (her mother, Ann, once held the 800m record at Troy Buchanan High School).”

At around that same time, though, it was announced that softball would no longer be on the Olympic programme, so Price decided to focus on hammer throwing. She broke the school record in her final year of high school, then went on to represent the USA at the 2012 World U20 Championships in Barcelona one year later.

The 2015 season marked several breakthroughs for Price. She broke 70 metres for the first time, won her first NCAA title and made her first senior international teams.

“It didn’t really sink in that I could compete at an international level until my first World Championships team in 2015,” she says. “I remember sitting next to Anita (Wlodarczyk) at the World Championships in Beijing and thinking, 'I'm sitting next to someone who throws 80 metres'. I even remember reaching over and touching her leg. She kind of looked at me like I was a crazy person, but I just had to because I never thought this opportunity and chance would come.

“But now I'm throwing 78.24m – it's just been such a crazy journey, I would never have thought I'd be where I am today.

“With my story, I hope people can see that you don't have to start out really young,” she adds. “You can start in high school or college and you can still be a world-class athlete. So long as you put in the time to do it, you're going to thrive. If you want to do it and do it right, put 100% into it. Otherwise, when you look back on your past, you're going to have regrets.”

One other significant turning point came in 2015: JC Lambert became her coach.

“The year he became my coach was my year of breaking through,” says Price. “We started dating in 2011, he has been my coach now for about four years, and we got married last October.

“He is the best person in the whole entire world,” she adds. “He is an absolutely amazing coach. Every single moment we’ve been learning together. We know each other very well, we know each other’s signals, we know what to do.”

Before Price headed into Khalifa Stadium for the World Championships final in Doha, she and JC did their usual pre-competition ritual.

“I always say: it’s not me; it's ‘we'. We did this together. And that's what took the pressure off.”

There had been pressure earlier in the season, though. So much so, Price was close to ending her season in the middle of the year.

“At the beginning of the year I was throwing 76, 77 metres, I was going great,” she says. “And then for about four weeks all my numbers dropped by about 40 to 50 feet. Me and my coach were looking each other thinking, 'what just happened? What is happening?' I felt like I had a harness on. I thought that I was going to stop.

“I didn’t want to come out and only throw 66 or 67 metres. We were deciding whether we keep going or pack up and get ready for Tokyo 2020? Or do we retire? I didn’t want to be that person who just takes opportunities away from other great athletes.

“There was a lot of crying and a lot of pain, but fortunately I met a man called Brian Murer (a chiropractor), and he straightened me out and fixed me up. He said he basically put me back together with duct tape and baling wire.”

When Price talks about ‘we’, Murer and all of her support staff are included in that. So too are her opponents, particularly the two other medallists from Doha: Poland’s Joanna Fiodorow and China’s Wang Zheng.

“I love both of them,” she says. “It’s a lot easier to compete against people who push you and to have such great individuals to compete against. We support each other, we make each other better and that's why we did so well – because we’re friends.”

When Price defends her world title in two years’ time, she will do so on home soil.

Eugene’s Hayward Field, venue for the World Athletics Championships Oregon 21, has been a particularly special setting for Price. It is where she produced her first 70-metre throw, won both of her NCAA titles, and earned a spot on the 2016 Olympic team. She has set four PBs at Hayward Field, more than any other venue in the US.

It’s no surprise, then, that she is already excited about the prospect of competing there.

“There’s no place like TrackTown USA,” she says. “The USA’s first World Championships had to be in Oregon. There are no ifs, ands or buts about it. If it were somewhere else, I'd actually be a little bit disappointed. I've had national championships there, I've had Olympic Trials there. There's nothing better than a Eugene crowd trying to support you; it's fantastic.

“They didn't think a lot of people would come out for the Olympic Trials (in 2016), but they filled up the whole entire left side for the women's and men's hammer throw. You don't get that kind of energy and excitement anywhere else.”

Price has improved year on year ever since taking up the hammer. Still aged only 26, relatively young for a thrower, if her progress continues over the next few years, she will be a formidable opponent by the time of the next World Championships.

One of the big question marks will be whether Poland’s Anita Wlodarczyk, the world record-holder and multiple world and Olympic champion who sat out most of 2019 with a knee injury, can return to form before then.

Price has beaten Wlodarczyk twice, which may not sound like much, but her win-loss ratio against the Pole – currently 2:4 – is the best of any active hammer thrower.

But Price’s biggest motivation doesn’t come from statistics or medals. It comes from three questions she asks herself every day: why do I do it? Who do I do it for? And what's the purpose?

“If I can't ever answer those three questions,” she says, “then it's time for me to retire from track and field.

“I do this for all the women, to show that women can be strong and beautiful. You can be the best of both worlds.

“My purpose can change each day, but in Doha it was to show that the USA can throw. We have such great throwers and we can compete at an international level. And I can bring that medal home to my family, to my people and say thank-you.”

Price wasn’t the only successful US hammer thrower in 2019. Her compatriots Brooke Andersen and Gwen Berry ended the year in second and third place on the season lists. In fact, US athletes occupied five of the top nine places on the 2019 world list.

Price hopes it’s the start of something big for US hammer throwing.

But it’s not just hammer throwers she hopes to inspire. When Price talks, it’s impossible not to feel uplifted by her outpouring of positivity.

“Negative people don't have a part of my life because I don't let it,” she says. “I surround myself with such great wonderful people and I couldn't be more thankful for the people who I let into my life. When you have a negative person within your life, it drains you, it makes you exhausted and tired. I try my best to help anyone that I can.

“Opportunities and dreams come once in a lifetime. Love who you are. No one can love you unless you love yourself. This world is so hard; if you can't love yourself, it's not worth it. Look in the mirror and accept who you are. The world is yours; just love yourself because you're an amazing person. And smile – you’re meant to shine bright.”