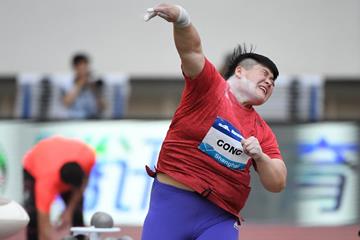 With a tattoo on her right arm that reads “Do what you do, say what you do”, Gong Lijiao is not a person that likes to talk big.

But after claiming her third title at the second leg of the IAAF Diamond League series in Shanghai last Saturday night, the Chinese shot putter revealed her ambitious goal for the 2017 season: winning the Diamond League Trophy as well as the gold medal at the Chinese National Games and the IAAF World Championships in London.

Winning in a Diamond League meeting was a good way to start a new season, especially when in such dominant fashion.

After taking the lead position with a first-round throw of 18.35m, Gong went on to improve her mark with each of her following five attempts. She ultimately outclassed Dani Bunch of the US and Hungary’s Olympic bronze medallist Anita Marton with a mark of 19.46m.

But in spite of her 48-centimetre winning margin, Gong was not quite satisfied with her performance as her pre-meeting target was to throw beyond 19.50m.

“I am not happy with the result,” said Gong, who showed a disappointed expression after each of her throws. “It is my first outdoor competition after the Olympic Games in Rio. I was a little bit nervous at the beginning and my body was tight.

“My overseas winter training was pretty good. But after I returned back to China, I have been kind of sloppy. I don’t know why – maybe because of the jet-lag, maybe because I am getting old. I just cannot find my best form.”

It’s not quite fair to use the word “old” to describe the 28-year-old Gong. But she has already accumulated plenty of experience on the international stage.

She has also taken part in three Olympic Games, collecting one silver and one bronze, and two editions of the World Indoor Championships, taking bronze in 2014. But she has never managed to set foot on the top podium step in any major international competitions.

The 2015 World Championships in Beijing could have been a good chance for Gong to break the jinx. Competing on home soil, she produced a big throw of 20.30m in the opening round but had to settle as runner-up to Germany’s Christina Schwanitz seven centimetres in arrears.

The Olympic Games in Rio was another setback for her. Boosted by her career best of 20.43m set three months before the Olympics, Gong arrived in Rio with high expectations but finished a disappointing fourth with 19.39m.

“I will not feel discouraged and won’t lose hope,” Gong said after her unsuccessful journey in Brazil. "Nothing is more worthy of persistence than a dream."

Now, the motivated Gong is ready to give it all to vie for the gold medal at the World Championships in London.

Gong plans to resume her overseas training later this month. But before that, she will compete at the Chinese Championships in Jinan this week, which also doubles as the qualifying events for the quadrennial Chinese National Games.

For the two-time defending champion at the National Games, who has remained unbeaten in domestic competition since 2009, winning a third straight gold medal in early September will not be a big challenge. However, the only problem might be the short interval between the two competitions.

“The World Championships and the National Games are equally important to me," she said. "I will try to compete to my best level in both events."

She also plans to compete in the Rome and Lausanne Diamond League meetings as she is aiming to win the 2017 Diamond Trophy, a feat that no Chinese athletes has accomplished.