Bahamian sprinter Joel Johnson, despite showing some potential in his formative years, never really took athletics seriously. Instead, he focused on basketball and his hidden passion, karate.

Almost a year ago, the 17-year-old was at a crossroads when he made one of the most important decisions in his life, that is, to put all his energy and focus into track and field. Today he has no regrets and is now ranked among the next generation of athletes expected to lead his country to the summit of world sprinting.

“I see my future as a professional athlete in track and field,” Johnson said in a self-assured manner. “I just know that I have to keep pushing and putting in the work and trusting the process to become the best like Usain Bolt, whose records I hope to break one day.”

Johnson, who won the 2018 CARIFTA Games U20 Boys’ 100m title, aims to make an impression at the upcoming IAAF World U20 Championships Tampere 2018.

“I’m definitely looking forward to the World U20s. It’s very important to me as part of my career development,” Johnson said candidly. “I plan to go over there and represent in the 100m and 200m and hopefully come back home with a few medals.”

He is no stranger to global competition having made his international debut at the last edition of the IAAF World U18 Championships in Nairobi, Kenya advancing to the 100m semi-finals where he registered a then lifetime best of 10.68. Less than a month later, he was at the IAAF World Championships London 2017 as a member of his country’s 4x100m relay squad, making him at 16 one of the youngest athletes at the championships.

“It was a surreal feeling as it was unexpected,” reflected Johnson. “It was my first big meet and it was such an amazing experience just to see in person how the other athletes perform on the big stage.”

With that experience under his belt the Bahamian came into the new season full of optimism and has so far displayed tremendous form by constantly revising his PBs in the 100m and 200m. At the CARIFTA Games, in front of his animated home crowd, Johnson won the marquee event in flamboyant fashion while setting a national junior record of 10.31 (1.1m/s).

Reporters had to wait a few minutes on Johnson who with adrenaline coursing through his veins on the night, took his time on his victory lap, soaking up the applause and adoration of his countrymen.

“I could have run way faster, but I knew from my time in the heats (10.40) that I was going to win. So I didn’t have to press too hard to come away with the gold medal.”

However, it was a different story in the 200m final where Johnson was forced to work much harder. He sped to a lifetime best of 20.90 which he also ran earlier in the heats, but this was only good enough for silver behind impressive world leader Christopher Taylor of Jamaica who won in 20.38.

Johnson is cognisant that he needs to keep trimming his times to have any chance of medalling against quality opposition in Finland. “I know the situation I’m in and the type of work I need to get done to be where I want to be. I just need to stay focused and composed as I did at CARIFTA.”

The charismatic youngster, who will attend the University of South Carolina in September, is following a similar road map to success as his Canadian role model Andre De Grasse, a triple medallist at the Rio Olympic Games. “I look at his (De Grasse) progress and see how he didn’t take track and field seriously initially and played ball before making the switch. I now look at all the success he’s enjoyed and the things he went through to be at this stage of his career and hope to replicate that.”

Until then he is prepared to trust the learning process and rely on his hard work to pay off at the right time starting in the land of the midnight sun.

BACK
Pages related to this articleAthletes
Joel Johnson 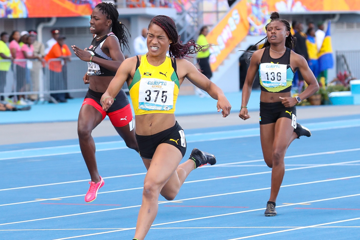