Outside lane no barrier for headstrong hurdler Carter

It’s started to become slightly fashionable to win global titles over one lap of the track from the outside lane.

Wayde van Niekerk memorably did it at the Rio 2016 Olympic Games in the 400m and set a world record of 43.03 and while Kori Carter – whose Twitter handle is TheKoriMonster – didn’t take the women’s 400m hurdles into new territory at the IAAF World Championships London 2017 on Thursday night, her run of 53.07 did take her to the gold medal and upset the odds.

British bookmakers had noticed Carter’s form since she finished third at the US trials in a personal best of 52.95, including a win at the IAAF Diamond League meeting in Monaco a few weeks ago and a pair of strong performances in the two earlier rounds in London, but still only had her at third in the order behind Rio champion and teammate Dalilah Muhammed and Czech Republic’s two-time champion Zuzana Hejnova.

However, running her own race with no sight of her opponents at ground level until halfway around the second bend – the big screens at both ends of the London Stadium stadium can sometimes help runners to gauge what is going on behind them but in races as short as 400m, few runners look at them or have the time to process the information – she edged in front between hurdles eight and nine and held her lead to the line.

“Going in lane nine, I had to go out hard. I was running blind, I had all the athletes chasing me. It was not a perfect race, but I am happy about it,” she reflected.

“I am known as a chaser, so when I first heard I was in lane nine, I thought, ‘oh this is going to be some problems.’ But at the last World Championships, I didn’t make the final and I just told myself, all I need is a lane. I’m not going to let lane nine be an excuse as to why I can’t get the win.

“My coach has been pushing me to focus on getting out really hard. I knew I had to just get it from the gun because I was running blind.

“Coach Flo (Edrick Floreal) always tells me in practice that we have to train at world record pace so I knew that I had to take the race out. I knew I didn’t want to come around hurdle eight and see I had 10 metres to make up.”

Carter – one of the best 100m/400m combination hurdlers in the world with a personal best in the shorter event of 12.76 and a 2009 world youth championships silver medal in that event – has sometime been accused of leaving her best form on American soil.

Witnesses for the prosecution cite her failure to finish her semi-final at the last world championships in Beijing and even her disaster in the heats of the 2008 world junior championships.

Well aware that it was about time she silenced her critics, she overhauled her life in the last year.

A change in lifestyle

“I made a lot of changes this year after I did not make the team to Rio last year, like moving from LA (she hails from California and went to the prestigious Stanford University) to Kentucky. My coach is like my second dad, he pushed me to do what I needed to do.

“Plus, I have great training partners like (100m hurdles world record holder) Kendra Harrison. She is one of my best friends. It has been a tough year, but now it is paying out. Kendra and I have become very close friends. If we have to do ice baths we challenge each other to do it, not to miss it.

"When you work so hard and sacrifice so much for something, for it to pay off in the end is so satisfying. It's a surreal experience right now. Me and my coach, our whole goal and focus was to get on the podium this year, it's what we've been committed to. To put it together is such a blessing.

"It's always great to run against great athletes because it brings the best out in you, going up against Team USA at trials really prepared me for this.

"I am on top of the world right now. What a blessing to be world champion. This is just an incredible feeling like I have never experienced."

Moments after she crossed the line, Carter tapped her head several times as if to indicate that that it was mental strength that delivered her first major international championship victory.

If you are in the outside lane in a 400m hurdles final at the world championships, then the application of some mind over matter techniques can’t do anything but help.

BACK
Pages related to this articleAthletes
Kori CARTER 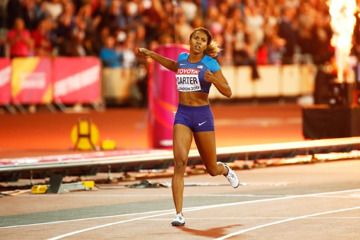