When world junior cross-country champion Letesenbet Gidey lines up for the 3000m at the IAAF World Youth Championships, Cali 2015, she will understandably be one of the favourites.

But it is quite the turn-around for someone who, just four years prior, was expelled from school for refusing to run in physical education classes.

“I really did not like racing,” said the 17-year-old. “I brought my parents to school to talk to the headmaster with the hope of getting reinstated. He agreed to reinstate me only if I ran for the school. I reluctantly agreed, just for the chance to get back to school.”

Biding her time behind the leaders for large parts of the race, Gidey and her teammates waited patiently for the early front running of Kenyan Daisy Jepkemei to peter out before hitting the front with 500 metres to go.

Only compatriots Dera Dida and African junior 5000m champion Etagegne Woldu were able to follow closely. Gidey had enough to hold for victory in 19:49, just one second ahead of Dida with Woldu completing the medal sweep only four seconds behind.

“I really did not do anything special to prepare for Guiyang,” said Gidey. “I never stress about competition and thought I should just follow the leading group and rely on my finishing speed at the end. I am really happy about my individual result, but even happier that we [Ethiopia] took the top three places.”

Born in Endameskel in the Tigray region of northern Ethiopia, Gidey – a fourth child in a family of two brothers and two sisters – grew up in her family’s farm looking to initially pursue academic interests. But after getting drawn to the sport in an unorthodox fashion, she knew that it could be her calling in life after competing in a regional race some four years ago.

“I ran a 3000m race representing my Woreda [district] and finished second at the All-Tigray Games,” she recalls. “It was this performance that convinced me that I may have a future in athletics.”

But it was not an altogether happy introduction to the sport for Gidey. Initially, she struggled for consistency when competing in her region, sometimes even getting lapped in races.

“I remember finishing 44th in my first cross country race [the junior women’s race at the Jan Meda national championships] in 2012,” she says. “That really did not feel good at all.”

After some preparation and support from her elder brother, who would bike along during her training to help pace her, Gidey captured the attention of club scouts when winning a 3000m/2000m steeplechase double for the Tigray region at the Ethiopian Schools Championships in Shashemane in late in 2012. A few weeks later, she joined the Trans sport club and moved to Mekelle, the capital of the Tigray region.

From Mekelle to Cali

Unlike the current crop of Ethiopian athletes who move to Addis Ababa, Gidey has chosen Mekelle as her training base and only travels to Addis Ababa for competition. She lives in a training camp organised by the club and says the focus has helped her attain excellent results at junior level.

Gidey will lead a strong Ethiopian team in Cali that also includes Youth Olympic steeplechase champion Wegene Sebsibe, but is mostly composed of athletes who will make their international debuts.

“Winning gold in Colombia is my big goal this year,” she says. “The competition there will be tough. I hope to do well.” 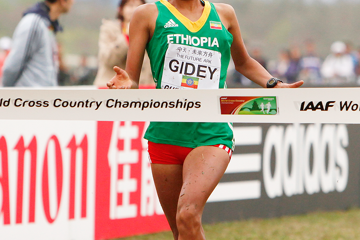