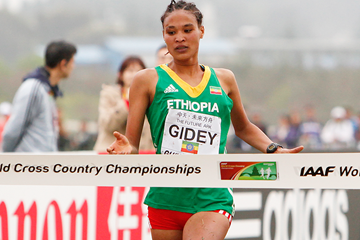 Gidey led her team to a clean sweep of the individual medals as she sped to victory over the final metres in 19:48.

It is the first time since Meselech Melkamu won the junior race in 2004 that the Ethiopian women filled that podium and they were also easy winners of the team competition.

As the 101 runners from 28 countries stormed off for first race of the day, it was initially the Kenyans who took charge of the leading pack.

At the front, heading down the first big dip on the opening 2km lap were three Kenyans, Winfried Mbithe, Gladys Kipkoech and world youth and Olympic youth steeplechase champion Rosefline Chepngetich, with only one Ethiopian in sight.

However, with each of the three laps of the 6030m course, the Kenyans in the leading pack of 12 runners dropped back as the Ethiopians slowly took charge.

Bahrain’s Ruth Jebet managed to hold on until halfway point, going through the two-lap mark in second place, before falling behind along with early leader Gladys Kipkoech, of Kenya.

Meanwhile, Gidey – who only turned 17 just eight days before the race and so became the youngest junior women’s winner in 15 years – maintained a comfortable third position throughout the majority of the race, splitting the first lap in 6:23, while the favoured Kenyans one-by-one paid the price for their early fast pace.

With one lap remaining, Kenya’s 2012 world junior steeplechase champion Daisy Jepkemei was at the front but chased around the winding mountainous course by five Ethiopians.

Not even her fellow compatriots, who supporting her along the course and running most of the distance armed with Kenyan flags, could help her being swallowed up by the Ethiopian force behind her.

With 500 metres to go, Gidey took off, immediately opening a three-second gap, with Dera Dida and Etagegne Woldu following closely.

Dida caught up with Gidey close to the line, finishing just one second in arrears behind her teammate, while Woldu was only four seconds behind.

Jepkemei, after all her hard work, finished an unrewarding fourth in 19:59, but collected vital points for her Kenyan team, who took away the team silver medals.

With Bahrain’s Desi Mokonin and world junior steeplechase champion Jebet finishing in eighth and ninth respectively, representing the only nation outside East African in the top 10, the Bahraini team managed to clinch their first ever medal in this category, taking the team bronze medals behind Ethiopia and Kenya.

Japan, who had been in the team medals in 11 of the past 15 junior women’s races at the IAAF World Cross Country Championships, finished in fifth place on this occasion while 2013 bronze medallists and 2014 European junior team winners Great Britain wound up in a disappointing 15th.