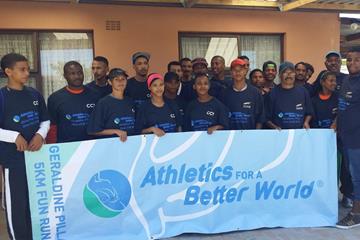 Let’s Run for our Communities, based in South Africa, is the latest project to see the light of day as part of the 2014 programme of Athletics for a Better World, the IAAF’s social responsibility programme.

Established by the former South African international sprinter Geraldine Pillay, the first activity of the project was a 5km Fun Run, which took place in the town of Macassar, in the Western Cape province, on Tuesday (16).

An estimated 900 runners took part, some arriving at the Macassar sports grounds two hours before the start at 8am local time.

Participants' ages ranged from seven to a woman of 79, the latter receiving an award for the oldest participant. Runners and spectators were also entertained by live music.

The Fun Run was particularly focused on two of the pillars of Athletics for a Better World (ABW): health and social inclusion.

ABW is encouraging projects which promote health through mass athletics participation activities which then contribute to creating a healthier and fitter society, especially for young people.

Athletics can also be used to bring people together and to help overcome the challenges caused by social inequality and the Fun Run had a number of participants with disabilities.

Details of what is Athletics for a Better World can be found here.