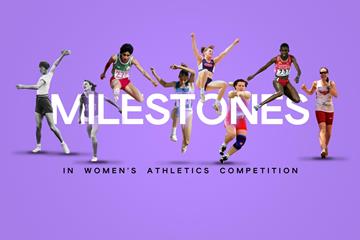 For a sport that dates back to ancient Greek times, one century isn’t a particularly long period of time.

And yet, as recently as 100 years ago, no international athletics championship existed for women. Only men’s events were contested at the first modern Olympic Games, held in 1896. It wasn’t until the ninth edition of the Olympic Games, some 32 years later, that women’s disciplines were included on the athletics programme.

It was a significant – albeit long overdue – step towards equality. But while men had a full schedule of 22 athletics disciplines, there were just five disciplines for women.

In the decades that followed, women’s athletics events gradually reached a point of parity with men’s. Now, almost 100 years after the first international women’s athletics tournament, men and women enjoy the same number of competitive opportunities at all global athletics championships.

Reaching this point, however, has been a long journey; a 100-year journey. Here’s a timeline of how the women’s programme of athletics disciplines has reached parity with men’s disciplines.

Some 25 years after the first modern Olympic Games, and frustrated by the ongoing disregard of women’s sports – and in particular athletics – French rower Alice Milliat created the ‘Women’s Olympiad’.

The first informal edition of the Games was held in 1921 in Monaco. Due to the lack of a running track, the tournament took place on a pigeon shooting field in the gardens of the Monte Carlo Casino.

The five-day competition, which was attended by 100 participants from five nations, was an all-round success. More importantly, it was a significant step for women’s sports.

Polish discus thrower Halina Konopacka was the first woman to win an Olympic title in athletics, and world records were set in four of the five women’s disciplines.

Despite the world record being broken in the 800m, reports that several of the competitors were dangerously exhausted were widely – and erroneously – published. As a result, the IOC decided that women were too frail for long distance running, and women's Olympic running events were limited to 200m until the 1960s.

The FSFI, still angered by the lack of equality, continued to apply pressure to the IOC and IAAF. Although the organisation disintegrated in 1934, Milliat’s hard work would not be in vain as the IOC and IAAF began to recognise the importance of women’s rights.

By the time the Olympic Games returned after its eight-year hiatus due to the war, the women’s athletics programme had almost doubled. Nine events – including new additions 200m, long jump and shot put – were now on the programme. And it was a woman who made the biggest impact at those Games.

More than three decades after its last appearance, the women’s 800m returned to the Olympic programme.

It became the 10th women’s athletics discipline at the Games and was won by the Soviet Union’s Lyudmila Shevtsova in 2:04.3, equalling her own world record.  And – surprise, surprise – no one collapsed through exhaustion.

The inclusion of the 400m and pentathlon brought the number of women’s Olympic events to 12, but that was still just half the number of men’s disciplines.

Nevertheless, both new women’s disciplines at the 1964 Games created history.

Australia’s Betty Cuthbert, a triple Olympic champion some eight years prior, returned to the top of the podium, this time in the 400m. She became the first – and remains the only – person in history to win Olympic titles at 100m, 200m and 400m.

In the other new discipline, the pentathlon, Irina Press smashed the world record with 5246, adding to the gold medal she won four years prior in the 80m hurdles.

With three Olympic women’s 800m finals having gone ahead without incident, the IOC added a longer event on to the programme for the Munich Games, the 1500m.

It was another success as Ludmila Bragina broke the world record in all three rounds, topped by her 4:01.38 run in the final.

The other new discipline, the 4x400m, also witnessed unprecedented depth as the top six teams finished inside the pre-Games world record. Winners East Germany clocked 3:22.95, a time that would contend for major medals even today.

In addition to the new events, the 80m hurdles was replaced with the 100m hurdles.

Replicating the disciplines on offer at the inaugural World Championships held one year prior, the Olympic programme expanded again in 1984 to include the women’s 3000m, marathon and 400m hurdles. And once again, the new events would become huge talking points at the Games.

The aftermath of the 3000m centred around the now infamous collision between medal favourites Mary Decker-Slaney of the USA and Zola Budd of Great Britain. Romania’s Maricica Puica went on to win while Budd faded to seventh and Decker-Slaney didn’t finish.

Joan Benoit’s marathon victory on home soil became one of the enduring moments of the Games. Meanwhile, Morocco’s Nawal El Moutawakel made history in the 400m hurdles, becoming the first African woman – and the first Muslim woman – to win Olympic gold.

The women’s combined events also grew in 1984 as the pentathlon was replaced with the heptathlon.

With the 25-lapper now on the slate for both sexes, women’s disciplines trailed men’s by ‘just’ six at the Olympic Games.

This was the first Olympics since the heavily boycotted 1980 and 1984 Games, so – helped by the extra competitive opportunities for women – participation numbers were at an all-time high.

The World Athletics Championships, indoors and out, were now operating on a two-year cycle. Athletics had never had so much global exposure and, as a result, the depth of women’s non-championship disciplines was improving.

The women’s triple jump bounded on to the global championships programme, first appearing at the World Indoor Championships in 1993 and then at the outdoor World Championships in Stuttgart just five months later. Russia’s Anna Biryukova took the title with a world record of 15.09m.

The event debuted at the Olympics three years later in Atlanta.

The first appearance of the women’s pole vault at a global championships featured a clash between several pioneers of the event.

Australia’s Emma George, China’s Sun Caiyun and Daniela Bartova of the Czech Republic – all world record-holders at some point in the years prior – met at the 1997 World Indoor Championships in Paris. But it was USA’s Stacy Dragila who came out on top, setting a world indoor record of 4.40m.

It was the first of Dragila’s 19 world records, indoors and out. Not only did she win the first ever world indoor title on offer in the women’s pole vault, she also claimed the event’s first ever outdoor world title (1999) and the first ever Olympic title (2000).

The inclusion of the hammer on the international championship programme meant that women had achieved parity – on the infield, at least.

Romania’s Mihaela Melinte dominated the event at the 1999 World Championships in Seville, winning with 75.20m. When the event made its Olympic debut in 2000, the late Kamila Skolimowska, then aged just 17, took a surprise gold for Poland. Compatriot Anita Wlodarczyk, who went on to become the most dominant athlete of her generation, has often said what a huge impact Skolimowska had on her career.

In another shift towards equality, the women’s 10km race walk was replaced with the 20km race walk.

In 2005 the World Championships returned to Helsinki, hosts of the inaugural edition in 1983 – only this time, women had 23 disciplines in which to compete, six more than was on offer two decades prior.

The women’s 3000m steeplechase was the latest addition to the schedule and Dorcus Inzikuru became the first global champion at that event. The 23-year-old also earned Uganda’s first ever gold medal at the World Championships.

The 50km race walk was the 24th and final women’s discipline to be added to international championships.

Its inclusion in the British capital meant that women finally had the same number of disciplines as men at major global championships.

Although parity had been achieved in track and field, there was still a bit of work to be done at other championships.

The distances of the senior races at the World Cross Country Championships were equalised in 2017. Whereas before men had traditionally raced over 12km and women at 8km, in 2017 the distances for both men and women were set to 10km.

Continuing with the equalisation of race lengths, this year’s World Athletics U20 Championships in Nairobi will feature the same distance events for men and women.