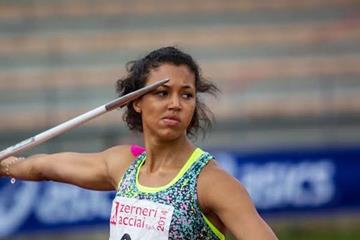 Morgan Lake in the heptathlon javelin at Multistars in Florence (Organisers) © Copyright
27 MAY 2014 Feature Florence, Italy

Teenage talent Lake has a good feeling about Gotzis

Morgan Lake, who turned 17 just two weeks ago, is the latest heptathlon sensation in what has become over the past decade an extraordinary tradition of British combined event specialists.

After becoming the youngest winner in the 27 editions of the Multistars meeting and producing the best heptathlon tally in the world by a 16-year-old since 1997, giving herself an astonishing early birthday present, the question now begs: what can she do at the famous Hypo Meeting in the Austrian town of Gotzis this weekend?

She will come up against the silver and bronze medallists from last year's IAAF World Championships, Brianne Theisen-Eaton and Dafne Schippers, but has already showed that she is not over-awed by lining up against the top heptathlon talent.

“I didn't really expect to win and beat Jessica Zelinka, who took part in two Olympic Games. I set three PBs and performed well in the high jump and in the long jump in rainy conditions and in the shot put," said Lake in Florence.

“It’s such a great feeling to follow in the footsteps of great athletes who have made the history of the Multistars like (Olympic champion Jessica) Ennis. I really enjoyed my first senior competition in Italy, a country I had already visited when I spent a holiday with my family in Sorrento,” she added.

Following in famous footsteps in Florence

There has been plenty of British success at the Multistars meeting in the past. Denise Lewis, Kelly Sotherton, Ennis-Hill and Johnson-Thompson all kick-started their illustrious international careers with an appearance.

Johnson-Thompson in turn broke Ennis-Hill’s national junior record in 2012 with 6007, which she later improved on at the London 2012 Olympics Games with 6267.

Despite having another two years in the junior ranks, Lake's Multistars performance already places her third in the British junior all-time list behind Johnson Thompson's 6267 mark and Ennis-Hill's 5910 score.

In the Tuscan capital, Lake set three individual track bests in the 100m hurdles with 14.25, in the 200m with 25.04, and in the 800m with 2:22.72 and performed brilliantly in rainy and cold conditions in her favourite high jump event where she cleared an impressive 1.87m, just three centiemtres off what was then her best.

No doubt she will be hoping for more agreeable weather this weekend in Gotzis.

Lake was introduced to athletics at the age of five by her father Eldon, a former English Schools triple jump champion and a coach at her local Slough Junior Athletics Club, on the outskirts of London. He was on hand in Florence to congratulate his daughter on her big achievement.

“The target was to score 5600 points in her first senior meeting," said her father. "Her 6.16m in the long jump and the 1.87m in the high jump in torrential rain were the highlights of the weekend. I'm happy with her result in the long jump, especially because she had some problems with the run-up."

Morgan started learning the basics of athletics, like so many athletes in so many countries, by trying many events.

“At the beginning the emphasis was on having fun, acquiring the skills and learning the basics of all athletics events, but these competitions provided me with the basics for combined events and gave me the taste of multi-event competitions," said Lake. "This was the natural progression for me to compete in combined events. I have always enjoyed trying many events, especially the jumping events. I also tried the triple jump and broke the British under-17 record."

However, she gained her first taste of the limelight when, at the age of 12, she broke 2000 Olympic 400m bronze medallist Katharine Merry’s British under-13 pentathlon record with 3046 points in her first ever five-discipline competition.

“This was the moment when I started training seriously and I decided that I could pursue a career in athletics. I have always enjoyed competing in many events. I couldn't imagine doing just one event," recalls Lake.

She went on to also break the British under-15 pentathlon record and has won UK age group titles in the high jump and long jump.

She started to gain international attention in early 2013 when she scored 5725 in the heptathlon, a world youth best performance in the new specification heptathlon with the lighter throwing implements.

At the 2013 IAAF World Youth Championships in Donetsk she looked on course for the gold medal after setting a British under-17 record in the high jump with 1.90m, a height which would have been enough to win the individual gold medal.

She also set a personal best in the 100m hurdles with 14.12 and came close to her personal bests in the shot put and the 200m to finish the first day with a lead of 192 points over her rivals.

Unfortunately, disaster befell Lake at the start of the second day when she only leapt to 4.63m with her first attempt in the long jump and could only follow that up with two fouls, albeit big efforts.

She had the frustration of seeing the title go to Germany’s Celina Leffler, who also improved Lake’s world youth best performance by 22 points.

“I had problems with the run-up and it didn't really go as planned. Donetsk was a learning experience for the future,” said Lake, ruefully recalling her Ukrainian adventure.

Nevertheless, despite that set back, Lake has gone from strength to strength in 2014.

More recently, little over a week ago, Lake broke the British junior high jump record when she cleared 1.93m.

Such performances could make Morgan Lake a potential star of the forthcoming 2014 IAAF World Junior Championships in Eugene, in what could shape up as a fantastic heptathlon competition against the USA’s Kendell Williams, who broke Kluft’s world junior indoor record with an impressive score of 4635 points at the NCAA Indoor Championships at Albuquerque last March, and Cuba’s defending champion Yargelis Rodriguez, who won in Barcelona two years ago as a youth with 5966.

However Lake is still undecided about whether to take the trans-Atlantic trip or compete much closer to home at the Commonwealth Games in Glasgow, which coincides with Oregon 2014, and she will only make the decision next month.