We conclude our World Environment Day series with a look at 42|54, a sustainable activewear company founded and operated by 2008 Olympic 4x100m champions Elodie Ouedraogo and Olivia Borlee.

It took 42.54 seconds for Elodie Ouedraogo and Olivia Borlee - along with teammates Hanna Marien and Kim Gevaert - to race to Olympic silver in the 4x100m at the 2008 Olympic Games in Beijing. A subsequent doping ban turned that silver into gold eight years later, underscoring the quartet’s status as national heroines. As their careers wound down, the two turned the number representing that winning performance into a clothing brand that's now turning heads for its style, functionality and sustainable design.

Those three factors were a perfect meld for Ouedraogo and Borlee, the former a journalist who worked in the editorial department at Elle Belgium after her retirement in 2012 and the latter a student of design. With their experience as successful athletes, the functionality component was another logical fit. And the sustainability element? That was just a natural progression that fit the pair's passions, commitments and lifestyle. That combination has evolved into a successful activewear venture with the potential to become the duo's second gold medal-winning performance.

A passion for fashion, inspired by athletics legends

One driving force behind their idea to create their own brand was the desire to bring back some bold and fun outfits to the athletics, clothes created to perform but designed to be noticed.

"We’ve always looked up to and have been inspired by strong female athletes," Ouedraogo says. "Especially in the 1980s and 1990s you had all these incredible women who not only stood out by their performance on the track, but also by their outspoken sense of fashion and style. It was a period where fun and extraordinary performances came together."

In that era, Ouedraogo says, it was Florence Griffith-Joyner, Jackie Joyner-Kersee, Gail Devers and Merlene Ottey who stood out, both for their athletics achievements and for the style they displayed.

The project began with a simple black legging, Borlee said, one that took a year to develop, from sourcing materials and to producing the final sample.

"Our careers as professional athletes give us, of course, an unrivaled knowledge of what an athlete needs to train without being hampered by their outfit,” Borlee says. “We worked with a development team in Antwerp, known for their work with some of the most famous designers in the world. And together we created a legging that we are still able to wear four years later."

Ideas for the line grew from there, along with ways to incorporate principles of sustainability into their production.

When their Beijing silver was upgraded to gold in 2016, another principle firmly took root: the notion that clean athletes should also wear clean clothes.

..and at the 2016 Memorial Van Damme in Brussels, after their upgrade to gold

"While many of us became strong advocates for clean, drug-free sports, we are less outspoken when it comes to clothes we wear while performing," Ouedraogo says. "We felt this too has to change."

Clean clothes, Ouedraogo explains, "means sportswear made in honest conditions and without the environmental strain it has today. We as a brand no longer want to applaud recognition and financial gain while producing low cost shirts. Because someone, somewhere is suffering because of it."

Borlee says that 42|54 "believes in a fashion industry that values people, the environment and talent in equal measures." When they launched in 2016, that concept was one that the market was interested in, too. 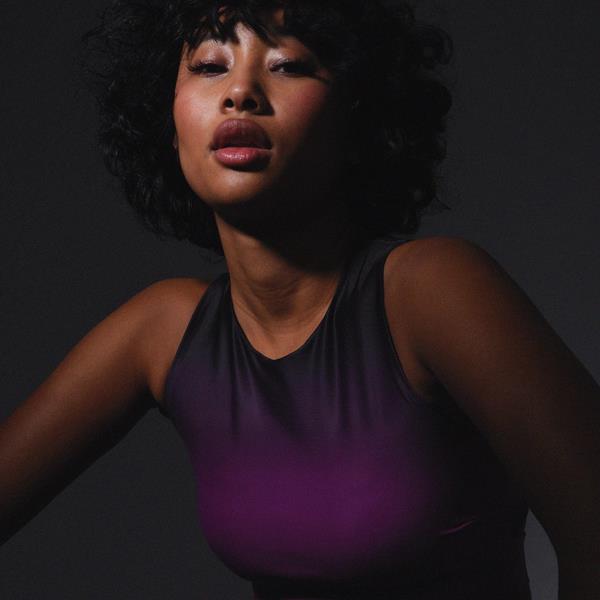 Local stores took an immediate interest. National, and later international media feedback, was positive. Just a year into the venture, Vogue US took notice. Models Hailey Baldwin and Doutzen Kroes and pop singer Ellie Goulding gave some of their designs a go. There was interest from the massive Chinese market, with retailers such as Lane Crawford and SKP picking up their growing lines. Those were exciting times, Ouedraogo says, but the fast pace of the global fashion scene proved too big a challenge for a young, emerging brand.

"In 2019 we decided to quit the fast pace of fashion to focus on producing collections that again felt 100 percent ours. We grew unhappy with the vapidity of fashion, not to mention the environmental strain and pressure it was putting on factories and people."

Underscoring their commitment to sustainability

Borlee says that the company has always been mindful about how their clothes would be produced, where the materials came from and where they would be assembled. They work primarily with local suppliers who provide every fabric, zipper, button, label and elastic band.

"Today we speak about being an eco-conscious brand, but this is more so an evolution of early installed norms and values. The objective is and has always been to make clothes that stand the test of time."

They've selected 'clean factories' in Europe and Tunisia, those that ensure safe and fair working conditions, where employees are paid a living wage and treated with fairness and respect. The factories have all earned REACH (Registration, Evaluation, Authorization and restriction of Chemicals), GOTS (Global Organic Textile Standard) and ISO 9001 quality certification.

Their full line of is now made from 100 percent sustainable hand-picked fabrics, based on their environmental footprint and durability. That means recycled, natural, renewable, organic and biodegradable fabrics. Each of the Tech Tee t-shirts, for example, is made from 11 recycled plastic one-litre bottles. 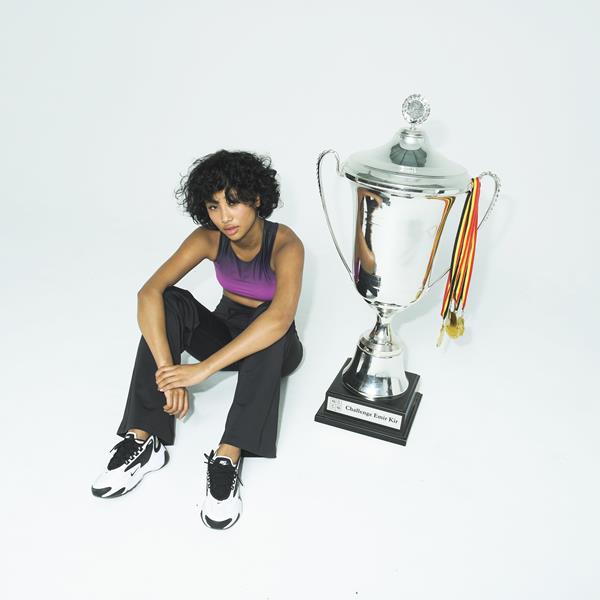 Outside of work, Ouedraogo said she doesn't consider herself a “green warrior” or “an example of how to live a sustainable life".

"But we 100 percent get the message and understand the urge to act today. We all have different battles to fight in life but we are convinced that with little effort we can already make a big difference."

For their part, both say they've removed “fast fashion” from their lives and buy fewer clothes; they pass on packaged foods and shop for fresh, local and seasonal selections instead; and drive as little as possible. All employees at their base in Brussels walk or bike to work. Their online service features reusable packaging - when a customer returns a bag, they'll receive a discount on their next purchase. And they also use biodegradable labels.

42|54 has reached a point where its founders are earning a stable income, but they continue to re-invest a big chunk of their earnings back into the company - and into the sporting community. Part of that investment is earmarked for their Ambassador programme, through which they currently support six athletes with serious Olympic ambitions of their own: Belgian hurdlers and sprinters Hanne Claes, Eline Berings, Angel Agwazie and Camille Laus, sprinters Emily Diamond from Great Britain and Jasmine Todd from the US, and Belgian T54 wheelchair racer Lea Bayekula.

"It has always been our goal to become a brand that serves as today's women's personal survival kit and Wonder Woman cape all wrapped in one fashion driven performance piece," Ouedraogo says.

Looking ahead, Borlee says the sky is the proverbial limit.

"The great life lesson in winning an Olympic gold medal is that you learn anything is possible if you are willing to work hard and put your mind to it. So why not aim to become a global activewear brand?"

Those ambitions can be met by providing a product women are truly looking for. Ouedraogo thinks they're ready to deliver just that. 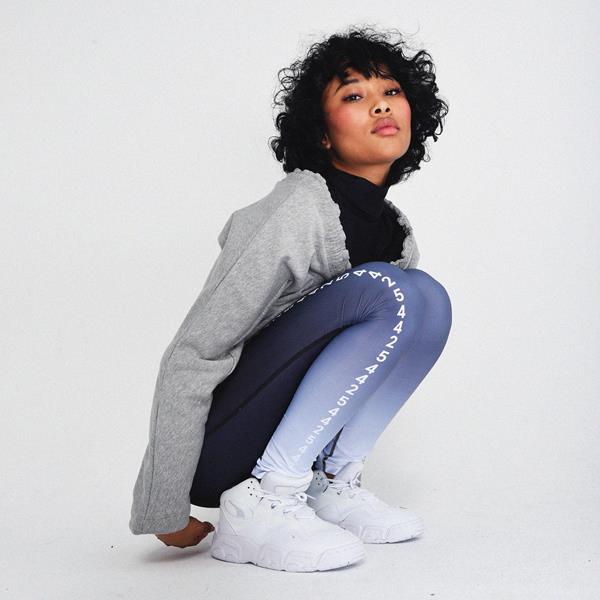 "We definitely also want to be recognised as the go-to brand for women who like to have something that is different. Today many women try and balance a career, family and personal time. Finding an outfit that accommodates that lifestyle can be quite the search. The idea to have a legging that is designed to perform but has the high-end look and feel that makes it chic enough to wear outside the gym is very appealing to a lot of women.

"On top of the need to be unique or different, women want to be informed on what they are putting both in and on their bodies today. Being able to empower the everyday champions is equally as important and gratifying."

BACK
Pages related to this articleAthletes
Elodie Ouedraogo

Ibarguen: 'Respecting the environment is resp...

Athletes and the environment: answering the s...