There’s a rare bond that exists between training partners, a connection forged through mutual understanding. They’ve seen each other at their best, been there for each other at their worst, and surmounted every speed bump together on the path to peak performance.

But for Peter Bol and Joseph Deng, the connection runs even deeper.

The Australians share the same South Sudanese heritage, with their families fleeing the Second Sudanese Civil War in the late 1990s. Both arrived in Australia as children – Deng was six, Bol was 10 – and both settled with their respective relatives in Toowoomba, Queensland.

They’ve known each other for 13 years, and these days the similarities are striking. Both can run 1:44 for 800m. By and large, they follow the same racing schedule. For most of the year they live together in Melbourne, then relocate to the northern hemisphere in the European summer, sharing planes, trains and automobiles as they traverse the circuit to different races.

Under the guidance of coach Justin Rinaldi, they do exactly the same training and when they are asked about their hopes for the Olympics, they aren’t afraid to admit they share the same goal.

“Making the final,” says Deng. “If you’re in that final, there are only eight people and three medals for the taking, so you’ve got a big chance.”

Bol breaks it down further. “It’d be nice to run 1:43. That’s what we need to be doing if we’re going to make a final and win a medal.”

They took different paths to this same point. Deng was born in a refugee camp in Kakuma, Kenya and arrived in Australia at the age of six with his mother, Rebecca, and his sister, Margaret. “It was pretty hard at the start, having to learn English,” he says. “Through school I made some friends playing sports and it worked out quite well in the end.”

Bol was born in Sudan and his family fled the civil war and settled in Egypt when he was six. “It was different in Egypt, a different culture, different people, but the same language which was easy to adjust to.”

When he was 10 his family moved to Australia alongside his parents and four brothers, first settling in Toowoomba before later moving cross country to Perth. He played soccer and basketball in his teens before starting athletics shortly before graduating high school.

Deng first took up running in 2007, using it as a way to get fit for soccer. At the age of 15 he started to take it more seriously after getting a scholarship to Ipswich Grammar School in Queensland. “I never really had a coach until I went to that high school,” he says. “I used to wing it.”

“He brings a lot of knowledge and he’s passionate about it,” says Bol. “He loves it, which kind of helps.”

The original record of 1:44.40 had been set by Ralph Doubell when winning 800m gold at the Mexico Olympics in 1968 before being equalled 46 years later by Rowe. In July 2018 in Monaco, Bol and Deng sensed their chance, and Rinaldi made a late decision to fly in from Australia to witness the feat.

It was Deng who fired best on the night, clocking 1:44.21 to finish seventh. “Going into the race we kind of knew one of us was going to break it,” he says. “It was an amazing feeling.”

They have yet to go quicker since, but a few untimely injuries and this year’s pandemic are the chief reasons for that. They both took the widespread cancellations in their strides.

“I thought, it is what it is,” says Bol. “It’s not like we didn’t make the (Olympic) team, it just wasn’t happening.”

Their usual European base is Leuven in Belgium, but after spending some time in Tubingen, Germany earlier this year they decided to return there between races. Bol began 2020 in positive fashion with two 1:45 runs in Australia in February, and in his first race for six months he ran 1:44.96 in Monaco in August. Deng also ran 1:45 twice earlier in the year but his late track season was hampered by a strain in his quad.

“The season hasn’t gone that great but it’s still way better than last season,” says Deng. “Last season was a shocker: I was running 1:48 and had low iron, achilles problems, so I had to get all that sorted.”

They wrapped up their European season in Zagreb, with Bol and Deng finishing down the field in 1:45.94 and 1:46.11 respectively. Their movements over the coming months will likely depend on the severity of restrictions in Australia and where they can best prepare for 2021.

Their training programmes are exactly the same. On a Monday they’ll do a 20-minute run alternating hard and easy pace in the morning and 10x100m in the evening. Tuesday is hill reps; Wednesday is a 30-minute run; Thursday is more hills; Friday is a rest day, while Saturdays is some form of long interval session like mile reps. If they hit 50 kilometres of volume by Saturday, they take Sunday off.

When they’re not training, you can usually find them sipping coffee at local cafes or else taking their competitive nature out on the PlayStation with marathon sessions of FIFA.

Having been born and raised across different cultures, it’s only natural that they feel a mix of nationalities and both feel their identity is a blend of the two.

“You’re always going to be Sudanese but we live in Australia now, that’s what we call home so you’re also Australian,” says Deng.

“And that’s what we represent,” adds Bol. “But we’re definitely South Sudanese as well. It’s a part of our culture, and our family’s. We can blend in both cultures so it’s a perfect place to be.”

Every country, of course, has its share of xenophobia and Australia is no different, but the pair believe their sporting exploits have helped them avoid the worst of it.

“For us it’s always going to be different because of where we are and what we’ve done, but through other people’s experiences you can see it’s kind of different,” says Bol. “It is hard for other people, not just Sudanese but refugees in general and the indigenous people in Australia.”

Perhaps the perfect antidote to any ill-feeling towards immigrants is the pride with which Deng and Bol represent Australia, and as they head into the off-season and look towards 2021, the dream of them lining up in the green and gold in Tokyo is what sustains them.

Competing not so much against, but alongside, each other. Two great friends, brothers in arms, out there on the sport’s biggest stage.

BACK
Pages related to this articleAthletes
Peter BOL 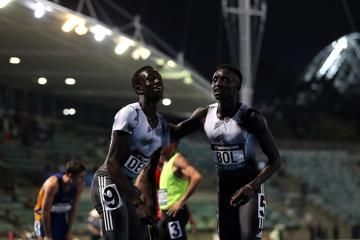 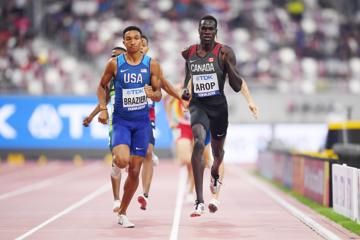 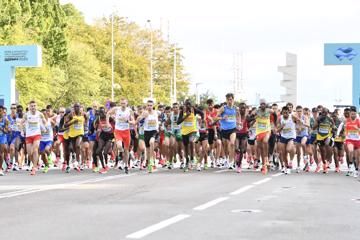 Refugee team member Nait-Hammou on his half m... 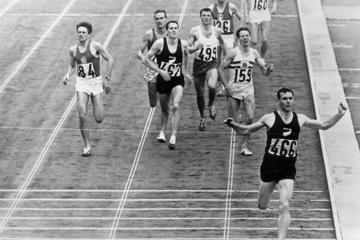 Remembering how Snell tore up the Tokyo track...