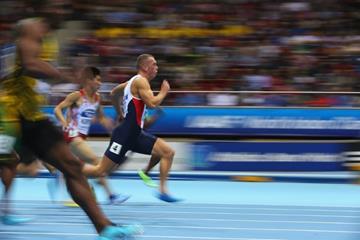 It was a tale of the unexpected, the kind Roald Dahl outlined in his celebrate volume of that name.

Richard Kilty seriously considered hanging up his running spikes after being overlooked for selection in the British team for the 2012 Olympics. He would not have even made the GB squad for the 2014 IAAF World Indoor Championships had James Dasalou, the world leader this year in the men’s 60m, been free from injury and available for selection.

Then there is the question of the 24-year-old’s roots in the north-east of England. Kilty runs for Gateshead Harriers, one of the great British distance running institutions. The club was put on the global athletics map by Brendan Foster, who marked the opening of a new synthetic track at Gateshead International Stadium by setting a world 3000m record in August 1974. It was kept there by Charlie Spedding, who won Olympic marathon bronze in Los Angeles in 1984.

Gateshead was not supposed to produce world-beating sprinters, but then it wasn’t supposed to make great triple jumpers either. And who should come along in the famous red and white vest but the man who has held the global mark in the hop, step and jump game since 1995 – one Jonathan Edwards.

Edwards was an outdoor world champion twice over: in Gothenburg (where he set his world record 18.29m) in 1995, and in Edmonton in 2001. He never managed to strike gold at the World Indoor Championships. The best he achieved was silver in Lisbon in 2001.

So Edwards, for one, would have appreciated the measure of the achievement when Kilty surged from his blocks in the Ergo Arena on Saturday night and held his form and his nerve in a blanket finish to the men’s 60m final – edging victory ahead of US champion Marvin Bracy in 6.49, a lifetime best.

“I can’t believe it,” Kilty said. “It’s a dream come true. I told my dad four years ago I would be world champion and to think I’ve come out and done it…I feel like crying. It’s unbelievable. I’m on top of the world.

“I’ve been knocked back for selection so many times. It was massive motivation. I just wanted to come out here and prove people wrong.

“I considered quitting after I didn’t get picked for London 2012. I had no income and had to train on the road in trainers. I couldn't afford to get to the track. Nobody had it harder than me.

“Thankfully my dad, Kevin, persuaded me that I had the talent to give it another year. This is for him. I think he was watching it in a pub with his friends. I’m sure there will be some big celebrations.”

That celebrating will have been done on Teesside, some thirty miles south of Gateshead. Kilty actually hails from Stockton-on-Tees, the town where the great pioneering engineer George Stephenson opened the world’s first public railway in 1825.

KIlty has been dubbed ‘the Teesside Tornado’ but it has taken him some time to reach elite world class territory. A World Junior Championships 200m semi-finalist in 2008, he spent several years training in London under 1992 Olympic 100m champion Linford Christie before hooking up with Rana Reider after making the British 4x100m relay team at the World Championships in Moscow last year.

A former US coach of the year, Reider guides an eclectic group at the British Athletics High Performance Institute in Loughborough. His other charges include 2010 world indoor 60m champion Dwain Chambers, who finished sixth in Saturday’s final, Tiffany Porter, who took bronze in the women’s 60m hurdles final, and Christian Taylor, the Olympic triple jump champion from the USA.

“Rana has helped me so much,” Kilty said. “He’s fixed my technique and given me confidence. He’s made me believe I can be one of the world’s best sprinters. He’s made me realise I was an undiscovered talent.”