On her last visit to Birmingham, for the IAAF World Indoor Championships in March, Sandi Morris became the new golden girl of the pole vault, nailing her first global title with a 4.95m championship record.

In the IAAF Diamond League meeting at the blustery Alexander Stadium on Saturday (18 August), she was more of a Scarlett O’Hara – her ambitions for a shot at five metres, or higher, gone with the swirling wind in England’s Second City.

Still, with a 4.62m clearance, her most modest mark of the outdoor season, the one-time bridesmaid of the event --she won silver behind Katerina Stefanidi at the 2016 world indoors and Olympics and 2017 world outdoors-- bagged another Diamond League victory, her fourth of 2018.

Like Christian Coleman --winner of the world indoor 60m title in March, and of the 100m on Saturday by the thickness of his singlet-- Morris managed to make a winning return to Birmingham.

The fact is the 26-year-old pride of Greenville, South Carolina, has her sights set on propelling herself to greater heights still in 2018. Uncharted heights even.

Morris tops the 2018 world list with the 4.95m she cleared in the Liberty Bridge Jump-Off street competition in downtown Greenville on 27 July. She might have been heading towards the IAAF Diamond League Final in Zurich (30 August) and the IAAF Continental Cup in Ostrava (8-9 September) on top of the all-time world list. As it is, having come pretty close to clearing 5.07m in her home town, the world indoor champion will have something above 5.06m in her sights when she enters the arena in the Letzigrund Stadium, scene of Yelena Isinbayeva’s 2009 world record.

“That’s the closest I’ve ever been to making 5.07m,” said Morris, who joined Isabayeva and Jenn Suhr in the five-metre club with a 5.00m success in Brussels in 2016.

“Two of my attempts were really solid. I was over most of the way. I just didn’t quite have the depth behind the bar to make it completely over.

“The meet was perfect place for me to compete. There was no wind. It was a fun atmosphere which I thrive off. Some people don’t, but I love competitions where the audience is right up there against the runway with you, feeding you energy basically.

“And it was a really big confidence booster. It gave me the foresight to see that I really can do this – maybe within this season. It’s possible.”

Morris is patently a positive individual but how does she deal with the mental side of standing on the runway, ready to attempt a feat that has never been accomplished before? Surely there must be a nagging seed of doubt lurking somewhere in the mind.

“I guess my outlook is I truly believe that women can jump 5.20m,” she maintained. “I really do believe that.

“And that belief drives me to want to prove that, and to jump as high as I physically can.

“I don’t know what my top end is but I’m definitely going to push myself until I find out.”

That push can only be helped by the rising level of competition in the women’s vault - with the still-coltish Kiwi Eliza McCartney raising her personal bar to 4.94m, Stefanidi getting back into her stride with the retention of her European title and Katie Nageotte threatening to make a major breakthrough (and beating Morris to the NACAC title in Toronto).

“Even if the conditions aren’t perfect, a lot of the times the energy that you get from your competitors can feed into your performance,” said Morris, pondering the prospect of being pushed towards world record heights in Zurich and Ostrava.

“At the world indoors when Anzhelika Sidorova and I both made 4.90m, that’s what drove me on to continue to make 4.95m. Competition feeds the sport, any sport.

“The fact that we have so many women jumping incredible heights in the pole vault right now is a wonderful thing. There are a number of girls out there who are ready to break through that five-metre barrier.

“I think that in the near future, in the coming years, five metres for the women will become like six metres is in the men’s pole vault.

“I was looking at it the other day. In history, 24 men have jumped six metres and right now only three women have jumped five metres." Suhr, who has jumped 4.93 this year at the age of 36, holds the world indoor best at 5.03m.

“I think that’s surely because women’s pole vault hasn’t existed as long. And I think that it’s our time now.”

Following the path of other vaulting free spirits

Morris’ zeal is infectious. Like many of those who have pushed the pole vault to new heights, there is more to the University of Arkansas graduate than her track and field self. She has her four boa constrictors and her four lizards, sharing a passion for reptiles with her agent and mentor Jeff Hartwig, one of the first men to venture over six metres.

Vaulting for height rather than distance was pioneered in the home town of Stan Laurel – by members of the Ulverston Football and Cricket Club in the north west of England in 1843 - and the men’s Olympic title has been claimed by a vaulting vicar and by a Tarzan.

Bob Richards, who prevailed in Helsinki in 1952 and in Melbourne four years later, was actually the Reverend Bob Richards. Don Bragg, another US vaulter, delighted the crowd in the Stadio Olimpico when he celebrated his victory in Rome in 1960 with a Tarzan yell. Four years later he was playing the lead role in the film Tarzan and the Jewels of Opar, happily swinging from vine to vine in front of the cameras, when a court order halted production because of copyright infringement.

It was a similar story with the pioneering pole vaulters on the distaff side. Emma George, who took the women’s world record from 4.25m up to 4.60m, performed as a trapeze artist in an Australian circus troupe called The Flying Fruit Flies. The great Stacy Dragilla, who raised the global bar up 4.81m, was a rodeo rider in her youth in California.

“I was not aware of those stories,” said Morris. “It’s interesting... I think the pole vault attracts free spirits.

“I don’t know if I want to say it attracts people who are wild and crazy, but it attracts the free spirited people that are passionate.

“Passion is a thing that, if you have it, you’re going to have it in a number of realms of life. And you have to be kind of a passionate person and a driven person to take on an event like the pole vault.

“You have to be a bit of a daredevil. So I see that going hand in hand with being into other niche type things, like me being into reptiles. I also grew up riding horses. I did equestrian in high school.

“It’s almost like this spirit that pole vaulters carry. It just trickles over into all realms of life.”

Dragila, of course, was the first women to win a global pole vault title, triumphing at the IAAF World Indoor Championships in Paris in 1997.

“Stacy is an inspiration to me,” said Morris. “She has been so good for the sport. Not only were her performances amazing - especially for the time when she was jumping – but her personality, her outlook on the entire sport, is so inspiring.

“I strive to be that way. Yes, I want to be an Olympic gold medallist; I want break the world record. But I also want to reach out a hand and help other women up to the podium - because I feel your mark in history is more important than just the mark that you put up, the height you jump. 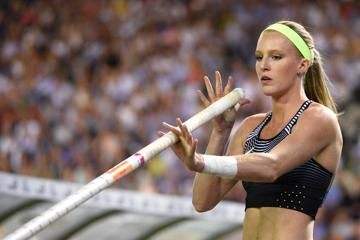 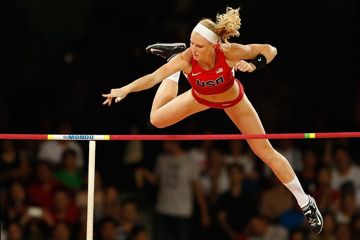 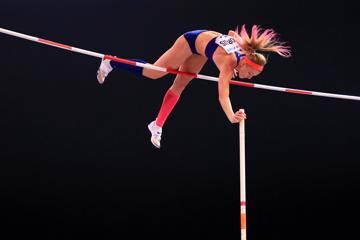 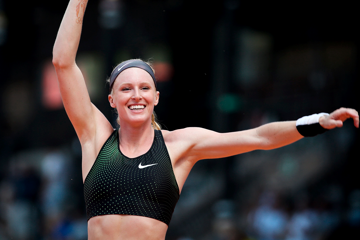 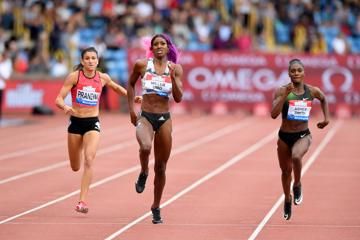 Miller-Uibo halts Asher-Smith's momentum in B...