When it came to the crunch, halfway down the home straight at the Alexander Stadium, Shaunae Miller-Uibo had too much class for her rivals in the stacked-high women’s 200m in the Muller Grand Prix in Birmingham on Saturday (18), the last stop on the IAAF Diamond League circuit before finals nights in Zurich (30) and Brussels (31).

At that stage reigning world champion Dafne Schippers was still marginally in front, having overtaken the fast-starting triple European gold medallist Dina Asher-Smith, but Miller-Uibo was on a serious charge, those long levers of hers rapidly gaining ground. Decisively so.

Her long, flowing hair dyed a distinctively two-tone pink and purple, the 24-year-old Bahamian strutted her high-speed stuff peacock-fashion, surging ahead to win in 22.15, a meeting record with Asher-Smith rallying for second in 22.31 and Schippers third in 22.41.

It is 12 months and a week now since Miller-Uibo, the reigning Olympic champion at 400m, last tasted the pang of defeat in a 200m race – taking bronze behind Schippers and Marie-Josee Ta Lou of the Ivory Coast (seventh here in 22.88) at the IAAF World Championships in London.

Asher-Smith might hold the world lead, courtesy of the breakthrough 21.89 with which she bagged her second gold at the European Championships in Berlin last week but Miller-Uibo has beaten her three times over 200m now in 2018 – in the Commonwealth Games final at the Gold Coast in April, where the Bahamian took gold and the Briton bronze, and at the IAAF Diamond League meeting in Rabat last month, where they finished one-and-two and Miller-Uibo clocked 22.29.

Asher-Smith intends to concentrate on the 100m at the Diamond League finals, in Brussels on 31 August, and at the IAAF Continental Cup in Ostrava next month, so the 22-year-old Briton will have to wait until next year to back up her super-fast time in Berlin with a true claim to world number one spot.

After expending so much speed and mental energy in Berlin, where she also clocked a world lead equalling 10.85 in the 100m, Asher-Smith looked somewhat depleted here.

“I think it’s been tougher emotionally because it was such a surprise for me doing so well in Berlin,” the Londoner confessed. “Having to refocus and race again five days after getting back has been a tough one.

“I am tired but I’m happy I was able to come out and perform in such a stacked field – full of girls who, apart from Dafne and me – have been resting up.”

As for Miller-Uibo, she remains unbeaten in eleven races at all distances in 2018 (and also in the high jump and shot she contested at the Bahamas Championships). She heads for the first of the two IAAF Diamond League finals, in Brussels on 30 August, likely to focus on the 400m instead of an ambition one-night 200m-400m double.

“But it was a great race today. I’m happy to come out on top and to get a pretty fast time.

“Once I put myself into the race off the curve I used my 400m strength to power home.”

Coming off the curve into the home straight, Jenna Prandini was level with Asher-Smith and Schippers but the US sprinter faded to fifth (22.55) with Jamaica’s Shericka Jackson fourth (22.55).

Morris beats Stefanidi, and the winds

As expected, the other greatly-anticipated head to head on the women’s programme came down to a duel between world indoor champion Sandi Morris and world, Olympic and European Katerina Stefanidi. And the elements, sadly.

At the IAAF World Indoor Championships in Birmingham in March, it took three and a quarter hours, the whole of the Saturday evening session, to resolve the pole vault battle. This time it took a mere 57 minutes.

Such was the disruption caused by the swirling wind, they were the only two competitors to survive beyond 4.40m. Morris needed a second attempt to nail that opening height but first time successes at 4.52m and 4.62m were enough to secure victory for the US vaulter.

Stefanidi took second with 4.52m, passing after initially failure at 4.62m but then dislodging the bar on both of her attempts at 4.72m. First time clearances at 4.40m were enough to claim joint third for her Greek team-mate Nikoleta Kiriakopoulou, silver medallist in Berlin, and Morris’ US team-mate Katie Nagoette. Britain’s European silver medallist Holly Bradshaw and Ninon Guillon-Romarin of France were the only other women to register clearances, both at the second time of asking at the opening height. Cuba’s former world champion Yarisley Silva, New Zealand’s Olympic bronze medallist Eliza McCartney and Sweden’s Angelica Bengtsson all failed to register a mark.

“We had really strong winds which were difficult to deal with but I'm happy I walked away injury free,” said Morris. ”I'm fortunate I could put some heights together.”

The Colombian actually saved her best effort for the fourth round – 6.80m (+0.1) but at that stage European champion Malaika Mihambo edged in front with a 6.82m (-0.3) effort and the German made sure of victory with a meet record 6.96m (+1.5) in the final round.

There was another German victory in the women’s field events, Christina Schwanitz (18.20m) turning the tables on her European conqueror Paulina Guba of Poland (17.92). Melissa Boekelman of the Netherlands was third with 17.82m, Olympic champion Michelle Carter of the US down in sixth with 17.39m.

Poor Janieve Russell. Pipped by 0.05 in Lausanne and 0.01 in London after neck and neck tussles down the home straight with Shamier Little, the Commonwealth 400m hurdles champion from Jamaica could not quite do enough to claim a Diamond League victory in the absence of her closely-matched rival from the US, a non-starter because of sickness.

Riding the wave of adrenalin that took her to European gold in Berlin, the tall, upright Lea Sprunger pulled ahead of Briton Meghan Beesley at the head of the home straight and did just enough to resist the challenge of the fast-finishing Russell off the final flight.

It was her first Diamond League win and the eight points have taken her through to the Final in Zurich, where she will have the noise of the home crowd fueling her round the Letzigrund track.

“These meets are the best you can have and to get my first win in the Diamond League is huge for my confidence,” reflected Sprunger. “The finals will be a home race for me and it will be very nice.”

Fresh from her 5000m victory at the European Championships, Sifan Hassan predictably proved a class apart in a 1500m race deprived of the presence of the ailing Caster Semenya.

The Dutchwoman could afford to bide her time, easing past 2016 world indoor bronze medallist Gudaf Tsegay with 200m to go and resisting a counter-challenge from the Ethiopian in the home straight to win in a respectable 4:00.60. Tsegay took second place in 4:01.03 with Poland’s European 1500m silver medallist Sofia Ennaoui thjird in a season’s best 4:02.06, Ethiopia’s Axumawit Embaye fourth in 4:02.44 and Britain’s Sarah McDonald nailing a PB of 4:03.17 in fifth.

Second and third in the European final on home ground in Berlin, Pamela Dutkiewicz and Cindy Roelder completed a German one-two in the non-scoring 100m hurdles, clocking 12.84 into a slight headwind (-0.6) and 12.96 respectively ahead of Nadine Visser of the Netherlands, third in 13.07.

BACK
Pages related to this articleAthletes
Lea SPRUNGER 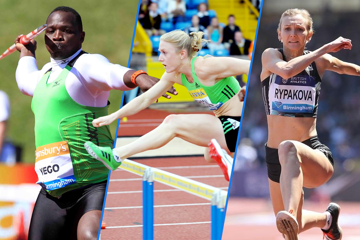 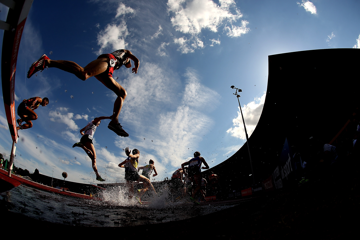